Not to mention the "best selling" one. 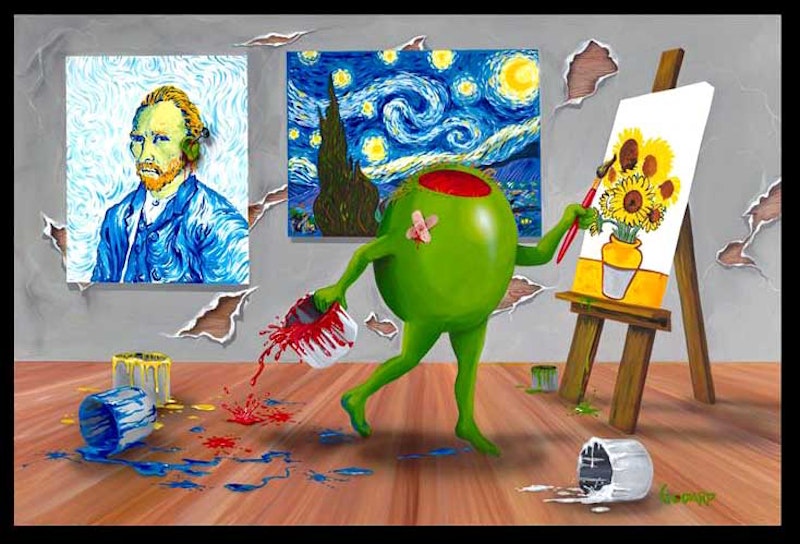 It takes a lot of effort to be the worst artist in the world. It’s a rare mix of self-importance and a lack of fundamental art skills that collide to form a colossal douche-storm the likes of Michael Godard.

I’m generally a positive guy when it comes to accepting art the way it is, the way that the artist created it, and the reason that it has entered into the world. I believe in a purity of intention, whether it’s conscious or subconscious, and I don’t think that certain aspects of art should be subjected to questioning. This, however, does not preclude critical thinking about artwork.

When someone declares himself the “best selling artist in the world,” it needs to be dissected, because it makes claims on a quantity that is not measurable. There is no definitive scale of artists and their sales, and many art sales are kept very private. Most artists aren't so motivated by profit and fame that they issue these crass statements of financial superiority, either. What, exactly, is this guy doing that presumably precipitates such a huge quantity of sales? What’s the secret to becoming a wealthy artist? Isn’t that phrase one of the cruelest oxymorons? And where’s the proof, aside from what the artist himself has propagated across the Internet?

As it turns out, part of the secret is to know the right people and cater to the lowest possible common intellectual denominator. When these things combine, rich idiots become easy prey, and you obtain a free license to poorly painted olives with arms and legs bein’ all silly around a badly painted martini glass—and get paid thousands of dollars for doing it. If it sounds like I’m jealous, it’s because I am, but not for being a lucky moron with less painting skills than that paintbrush-holding elephant on YouTube. I’m jealous of anyone who can pay the rent by painting.

Godard's questionable “fame” is the result of an unending hype machine that loudly proclaims how famous he is, and not because of any actual artistic skills. A basic look at his artwork reveals obvious proof that he’s unable to paint proportionate depictions of anything. His sense of lighting is embarrassing, and everything he’s created would fit perfectly, awkwardly, stupidly in a high school art show at the local mall.

Can someone tell me where the light source is in this image? The easel is casting a shadow to the right, the olive is casting a shadow directly at the floor, and the olive itself is shadowed on the left (but the leg is shadowed on the right). The foreleg's foot stands deeper into the canvas than the leg in the rear, and both are completely out of line with the easel. One poorly rendered fist later, and it's obvious this guy has no fucking idea what he's doing, but his showmanship is powerful enough to propagate a sale or two. Seriously, if you can look at this picture and not feel distinctly nauseated, I'd like to borrow the hammer that you've been hitting yourself in the skull with.

He’s probably written his own Wikipedia article, complete with misspellings and broken grammar that no one has bothered to correct, because he's genuinely not that famous, interesting, or notable. Some Godard-penned Wiki-gems include: “Despite all the negative critiques, Godard has redefined art with a new definition,” and “He was a part of a band called ‘Outcast’, which play in the very happening club scenes in LA.” He claims to have “burst onto the art scene” by bringing strippers and generally being a colossal asshole at an art expo in 2005, which heralded his profoundly anti-intellectual approach to art and equally feeble attempt to be the “rock star of the art world,” despite having no musical or visual talents.

If Godard is as successful as he claims, he's a prime example of how marketing is a vital component of commercial success in the arts, or at least the portion of commercialism that masquerades as art. Being accessible to even the most mentally bereft segment of the audience, or making food look like people, is apparently big bucks, but I don't believe it for a second. If there's a fortune to be had, it's because Godard's overpriced prints have permanent placement on Princess Cruise Line ships, thrust before a demographic that is already inclined to waste money on tasteless things.