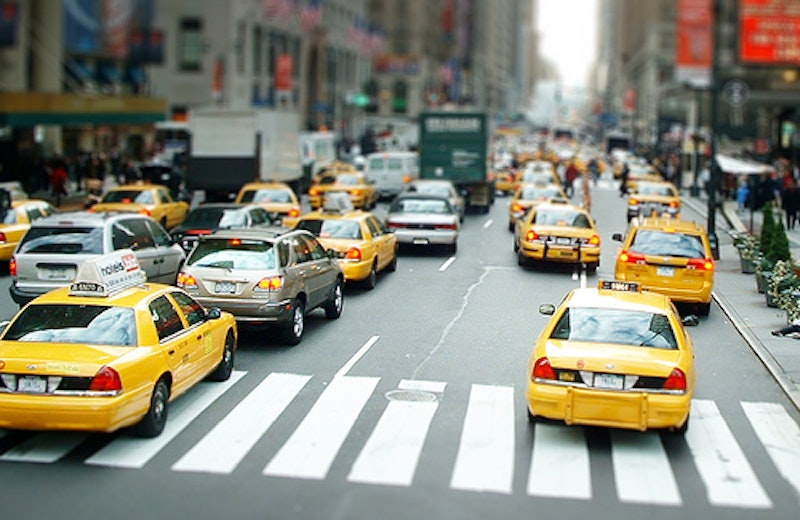 I’d been in Manhattan for just a few hours last week when I noticed a state of disrepair that recalled the pre-Giuliani years: a lack of working streetlights. My boys and I were staying in midtown at the Parker Meridien Hotel—which has gone to the dogs, by the way, with deteriorating service, a busted elevator and a pack ‘em in swarm of tourists from all over the world overwhelming the staff—and at 7:15 p.m. we went to the corner of 7th Ave. and 56th St. to hail a cab. It was stormy black, and remained that way on our ride down to Tribeca to dine at the superb Tamarind Indian restaurant, located where the now-shuttered Socrates diner once stood. (Socrates, at Franklin & Hudson Sts., was a favorite of ours for years when we lived across the street in the Powell Bldg., and if the coffee was sludge, the cheeseburgers were tops.)

During the course of our dinner, I mentioned this in conversation and suggested that Mayor Mike Bloomberg might be better advised spending his time on potholes and streetlights instead of making grand pronouncements about the United States from his elite, media-at-the-ready perch, and was met with good-natured barbs, primarily from my 25-year-old nephew Quinn and my son Nicky, 20, who enthusiastically endorsed a NYC that was grittier and featured some rocking knife-fights and shoot-outs in the streets. There was no winning this debate, even as I explained that my wife and I had already experienced that unruly and dangerous aspect of the city, back in the late 1980s, when the sidewalks on Ludlow St. were littered with spent crack vials, squeegee louts blocked traffic, the forlorn homeless jockeyed for position in open office buildings and on top of curbside grates, and I walked home from work at my Puck Building office in the middle of the street because of the casual criminals roaming at will once the sun had disappeared for the day.

I never favored the sanitization of Times Square and the burgeoning influx of chain retailers and restaurants—you’d never know that the parent company of the crummy Chipotle’s Mexican Grill (“food with integrity”) was in trouble, judging by the number of new outlets I spied since last visiting several months ago—but the declining battery of working streetlights doesn’t augur well for basic safety in the next several years. I suppose an argument could be made that at 57 I’ve become accustomed to a relative degree of peace of mind in New York, but even as a much younger man I never really cared for broken-down subway cars when, at one in the morning getting home could be dicey, and was often an adventure that surpassed the daily requirement of character-building.

Since our family moved to the less frenetic Baltimore nearly a decade ago, I’ve almost always greatly enjoyed frequent trips to Manhattan, but right now I’m on a complaint jag and don’t really have the fortitude to let it go. One afternoon last week I’d gone to Barneys to re-stock my supply of boxers, and upon leaving the not-so-crowded store (just days before Christmas, mind you), I was chagrined to find that my Bic lighter had slipped out of my trousers while slouching in a cab and fruitlessly waiting for my iPhone Twitter feed to load. I should’ve just walked over to the less tony Lexington Ave., but instead I stomped for 20 blocks on Madison Ave. and didn’t find a single bodega where I could purchase another mini-torch. That’s the Upper East Side, of course, but it still pissed me off.

Not nearly as much, however, as a cabbie the next day, who negotiated the traffic on 5th Ave. going downtown with the deftness of an 80-year-old who has no business on the road, the kind of person who in my youth was described as a “Sunday driver.” I leaned forward in the taxi, unforgivably ditching proper manners, and said: “Buddy, the goal is simple. Broadway and Prince, Fast. Fast, right? Totally Fast. So Find the Hole, because I’m late, and you’re not Finding the Hole. You’re moving like Yertle the Turtle with a feather on the gas pedal. I need to go Fast. Easy, Fast and Find the Hole. Right? It’s how you make a living, get the fares in and out, as many as you can pack in during your shift, and if I’m speaking out of turn, sorry, but for the love of Satchmo, Lenny Bruce and Rocky Marciano, move Fast and Find the Fucking Hole.” Not surprisingly, my brief, staccato sputtering had zero effect, and I knew that later on, if the cabbie even remembered this exchange he’d tell his wife about his day, just another a day at the office, swatting off assholes left and right.

On the other hand, the boys had spent several hilarious hours with my longtime friend Michael Gentile—he’s a talented painter who was the art director at my weeklies Baltimore City Paper and New York Press a quarter of a lifetime ago—and I thought I’d bust what’s left of my gut when Michael went on a stream of consciousness rant about the political rallies we used to attend, the hijinks pulled, the late evenings at Lower East Side bars, the raucous afternoons at Yankee Stadium with our friend Sandy Mattingly, and the derivation of “code” that really can’t be repeated even on the sludge and drudge-dominated Internet.

Not that it mattered so much, but a downside was that our dinner took place at The Modern (located next to MOMA on W. 53rd), and, naturally, it was a scene of would-be trendies and beauties and rich toads who no doubt fully endorsed the fizzled-out anarchy at Zuccotti Park last year. (By the way, what ever did happen to Occupy Wall Street and all the promises of mass disruptions, man, and taking it to the streets? No compulsory conscription is the common guess, and I agree, but those organizers sure blew a chance to make a lot of noise. You’ve got the gullible and nostalgic media slobbering over your every finger-wag and then go dark when the temperature sinks below 40 degrees? Fucked up, dudes.) I’ve liked Danny Meyer’s restaurants in the past, but with The Modern, I think he’s hit a brick wall. Or not, since it was fire-hazard packed, and our theoretical reservation of 8 p.m. wasn’t fulfilled for a stultifying half hour while our party of four was shunted off to the side.

The food was okay—exorbitantly priced and ladies-who-lunch portions, but that’s the territory—but the sheer cuteness of the menu bugged me, with the mandatory “artisanal” cheeses and “slow-poached farm eggs” jumping off the page. My son Booker and I both ordered the Alsatian sausage, which in Strasbourg would be a hearty choice, but at the Modern was a small piece of pigmeat, surrounded by meticulous drippings of mustard and a tiny clump of (very tasty) sauerkraut on the side. I like sausage, and don’t mind paying over $20 for a link, but on this night it was served rare, and maybe I’m a rube, but duck or sausage that isn’t at least a bit crisp turns me off.

At least it wasn’t as bad as the Regional Amtrak we took back to Baltimore the next day with the rank clogged toilets and solo passengers hogging dining car tables.

I do feel a touch uncharitable now, recounting common complaints about the country’s most important city, but what the hell, as a former longtime resident I’m entitled. And anyways, New York’s all about entitlement, right?