On the volatile and prescient Eclipso, star of a 20 issue run of DC's House of Secrets. 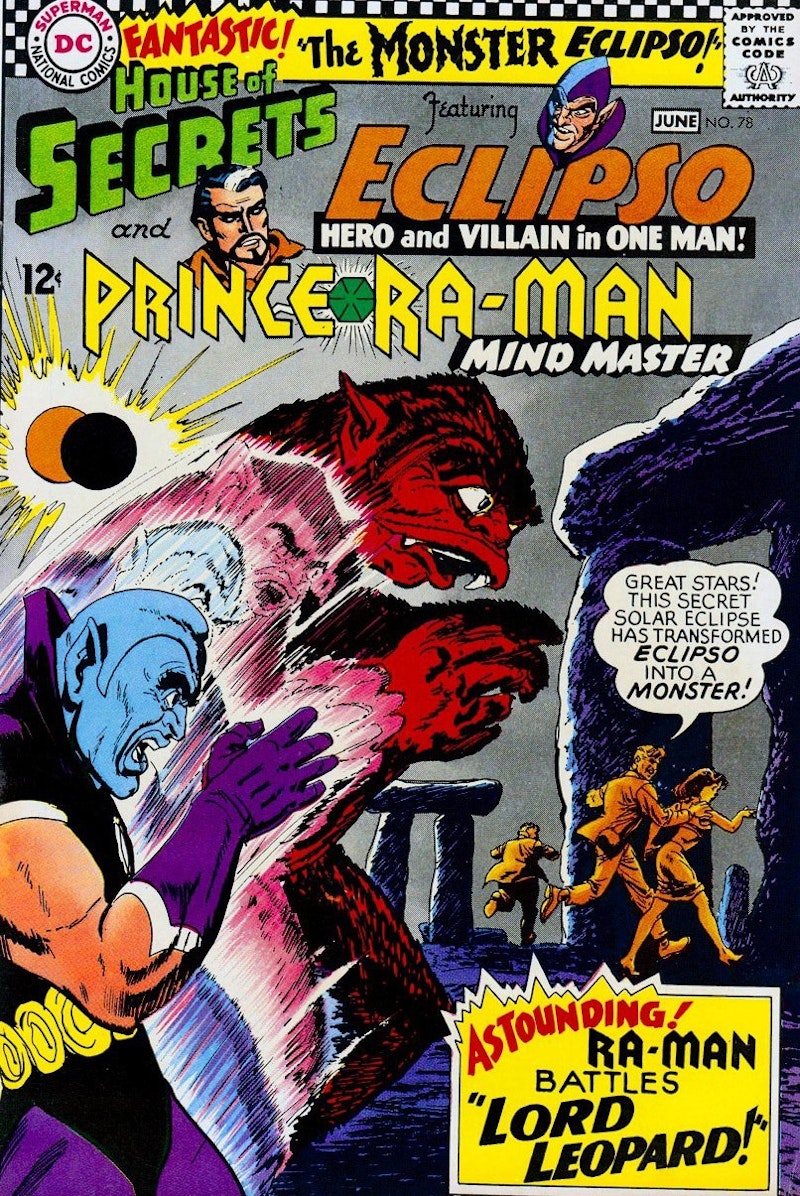 Religions, myths, and superstitions from all over the world cite the solar eclipse as a phenomenon connected to evil. Mensuration cycles and P.M.S. symptoms are sometimes left in disorder during a solar eclipse. In the ages before electric light an eclipse could easily be mistaken for doomsday. For sailors, farmers, and others who require assistance from the elements eclipses cause intrusive changes in temperature, tides, and wind. The solar eclipse often takes the blame for bad luck.

This lunar negativity inspired writer Bob Haney and artist Lee Elias to create the volatile prescient character Eclipso. The original Eclipso stories ran for 20 issues in innovative DC Comics title House Of Secrets (1956-1978). His adventures borrowed heavily from early/mid-1960s film noir, espionage thrillers, and hard-boiled fiction. All of these genres dealt with the power struggles and moral extremes embodied by Eclipso. The conflicted entity also represented themes that would become ubiquitous in the late-1960s and 70s. The strongest of these was blurred morality.

A “Hero and Villain in one man,” Eclipso was born in the jungles of remote Diablo Island as scientist Bruce Gordon was studying a solar eclipse from its clearest vantage point. Illustrating the tensions of “first world” progress, folk horror tropes, and post-imperialist damage, Gordon’s presence invokes fear in the low-tech island’s isolated villagers who are unfamiliar with the high tech trappings of 20th-century science. This causes tribal sorcerer Mophir to attack Gordon with the magic beams of a sacred black gem. The gem’s strange effect sparks an explosion that fuses with the powers of the solar eclipse. It kills Mophir and transforms Gordon into a power-mad being with pointy elven ears and a face marked by crescent darkness on one side. The other side of his face appears scowling but otherwise unaffected. Suddenly/inexplicably clad in Mophir’s purple-black costume (emblazoned with a garish eclipse symbol), the brain-damaged Gordon takes the name and identity of Eclipso. From this moment on every solar eclipse finds the scientist possessed by destructive compulsions.

Bruce Gordon must empathize with Eclipso in order to thwart his dangerous criminal schemes. A recurrent plot device finds the scientist intentionally becoming Eclipso at strategic moments of vulnerability where he can be captured or attacked by law enforcement authorities. He works with his mentor Professor Bennett creating various artificial eclipses (and similar light-based phenomena) that help to directly confront the villain. Eclipso’s influence unleashes a plague of deadly psycho-dramas that mount an unrelenting assault on Gordon’s sanity, identity, and the traditional definitions of heroism and bravery.

In “The Monster Eclipso” (from House Of Secrets no. 78) our villain comes closer to folk horror than any other story in the series, attempting to exploit the arcane astronomical power of England’s Stonehenge. Haney has a wild take on the purpose of Stonehenge’s vast network of monuments, barrows, and other underground infra-structures. The subterranean parts of the druidic complex are blessed with a priceless deposit of enchanted ore. Shortly before plundering the site Eclipso becomes a gigantic mutant version of himself after an eclipse and a storm of other scientific anomalies occur at once. This convergence liberates the villain from Gordon’s body and vice versa. It’s yet another strong reference to lunar phenomena as a supernatural source of pandemonium.

The treasure of Stonehenge is too much for Eclipso to handle. In every issue of House Of Secrets he’s defeated, but this is a rare defeat that gives Eclipso a taste of his own medicine, one that no average mortal could’ve predicted or inflicted. As anti-polarization robs the schizoid fiend of his power “The Monster Eclipso” reveals that the metaphysical can never be dominated by evil or good.