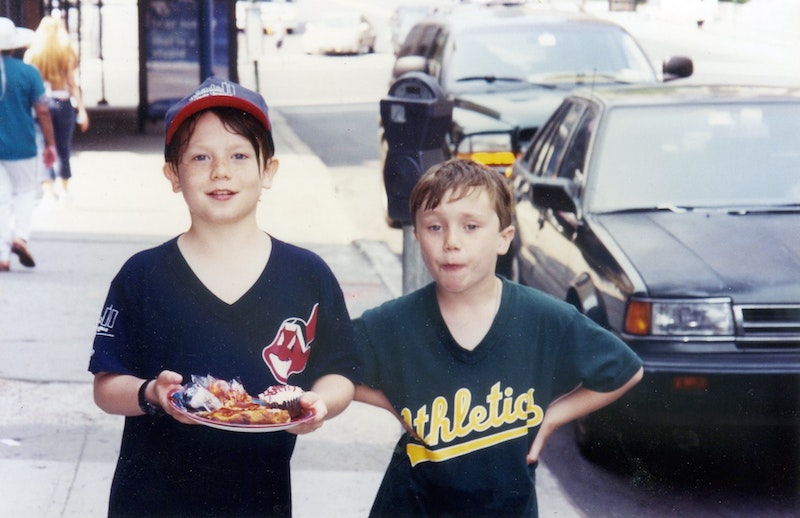 Fifteen or so years ago, I was irate after a Red Sox reliever blew a crucial game, and my son Booker, also distressed, reflected for a moment and said, “C’mon Dad, the Sox will win tomorrow. You’ve got sunshine in a bag!” He was referencing the 2001 Gorillaz song “Clint Eastwood,” and to this day, when either one of us expresses unusual irritation, that line is plucked from the mothballs of our minds. That’s my advice to Emina Melonic, a friend and valued colleague, who can become fairly apocalyptic at the frequent inanity found on social media. Over the weekend, Emina said she was “exhausted” after “doomscrolling” Twitter and I reminded her that logging onto the site is a choice, and if it all becomes too much, she ought to don a mask—a joke, Emina!—and get dreamily lost in the sunshine.

I never get exhausted looking at Twitter—Facebook is different: that complicated-for-its-own-sake algorithm showing dated weather reports and sports results is tiring, but perhaps in the wake of the company’s valuation nosedive the presumable wave of layoffs will fix things right up like a full-on English breakfast—even when confronted with out-of-context posts, useless partisan political predictions and “I’m in the club, too, guys!” Wordle scores. For example, I didn’t fume seeing that Senate Majority Leader Chuck Schumer made a fool of himself last week when solemnly speaking about President Sippy Cup’s upcoming SCOTUS nomination, saying that until 1981 the Court was always a White Man’s club. The hapless New York Senator was quickly corrected—Thurgood Marshall began his tenure in 1967—and I wondered if the staff member who wrote the speech for Schumer was immediately fired for allowing the boss to make a Biden-like gaffe or simply scolded because he, she or they got the job as a favor to a pharmaceutical buddy or big-bucks donor. Probably that question’s been answered, but I wasn’t interested enough to follow it through. Besides, new NYC Mayor Eric Adams is far more compelling, with his squirrelly jazz about “plant-centered” lives. Shrimp are plants, too!

I was taken aback when the often-idiotic Whoopi Goldberg was meted out a two-week suspension from the always-idiotic TV show The View after she made some off-the-cuff, and dumb, remarks about the Holocaust. Whoopi immediately apologized, on multiple platforms, which not so long ago would’ve been sufficient. ABC News president (since when is The View “news”?) Kim Goodwin played the fool for the media, saying “While Whoopi has apologized, I’ve asked her to take time to reflect and learn about the impact of her comments. The entire ABC News organization stands in solidarity with our Jewish colleagues, friends, family and communities.” Last I heard, Whoopi was still steaming at the public upbraid and has threatened to take her bound-to-become-more-idiotic commentary elsewhere. I hope she does, even though I’ll never see it. As noted in this space, I don’t watch TV—aside from sports and 10 minutes or so of the increasingly (if you can believe it!) infomercial-centric Today Show in the morning when I’m in and out of the shower. The bedroom TV is my wife’s territory—she tunes in at seven for the weather and traffic, and leaves it on—but when Al Roker, who really can be funny when he’s not in concert with his co-hosts with their smarmy patter, retires I may or not make a case for another morning channel. But probably not, since The Today Show, which is only a notch above The View, doesn’t exhaust me.

Sprinting now—third viewings of Baptiste beckon—to, as John M. Harris says, the “moronosphere,” I haven’t decided who looks worse, The Washington Post or the intolerable Stacey Abrams (I’m in the weeds, is Sippy Cup considering her for a SCOTUS seat?), over the latter’s flap several days ago when her campaign—more layoffs on the way, for the benefit of pink-slipped Facebook employees—showed a photo of the Georgia-Governor-in-Exile reading to a group of children, all masked while the candidate was not. The Post’s headline, unsurprisingly read, no doubt in defense of The Last Throes of American Democracy, “GOP rivals seize on Stacey Abrams’s maskless classroom photo as her campaign calls criticism ‘silly.’”

As is too often said—but in this case true times two!—this is an “optics” nightmare. At a time when Democratic governors across the country are rescinding mask mandates, the Abrams campaign, quoted in the Post advertisement for Stacey, saying GOP opponents Brian Kemp (the incumbent) and David Perdue are exploiting the widely-disseminated photo (until it vanished) of Abrams and the kids, during Black History Month, no less, for political gain.” No shit. Campaign manager Lauren Groh-Wargo said her boss “trusts science and supports masking in schools as it’s the current CDC recommendation.” The Abrams campaign said the candidate didn’t wear a mask because she was sharing her reading time remotely. Maybe. But photos are worth 100 words, and that one is going to bite Abrams in the ass. (By Tuesday, someone told Abrams to apologize, perhaps sensing they were “losing the plot.”) Still no word from Chuck Schumer on this latest affront to his Party. He’s on the horn, a rotary horn, with a D--p S---e operative figuring out the mechanics of banishing Kamala Harris to Athens for good.

I resisted the perfunctory Twitter exclamation “Oh, my!” (that’s a white lie, really, since I haven’t said those two words since last watching The Wizard of Oz with my sons many, many orbits of the sun ago) upon reading Washington Post scold Margaret Sullivan scolding Joe Rogan, Spotify and anyone who has resisted the Covid vaccine. (Not me, Peg, if I may indulge in a nickname, for I’m triple-vaxxed.) The backlash to her condescending column was instantaneous, since she used the Covid-related death of a former colleague (“overweight and asthmatic”) 47, to justify her Rogan attack. As many noted, Peg didn’t even mention the late Miguel Rodriguez, who covered high school sports for The Buffalo News, until the eighth paragraph of her column. I couldn’t care less that Rogan was slammed, and gladiator Neil Young (now calling for people to boycott big banks) deified, since that’s going around today like a Covid variant. Grieving is a tricky business, but it’s not a leap to think that Rodriguez’ parents were put off by Sullivan’s lecture/tribute.

At the least, Sullivan scaled Sugar Mountain by rendering New York Times DNC spokesman Paul Krugman merely an 80 percent asshole instead of the usual 100 with a star on top. Krugman, also on the Blame the Red State mini-bus, wrote on Monday: “I know I’m not alone in feeling angry about this irresponsibility [people who don’t wear masks and don’t get vaccinated], which has been encouraged by politicians and other public figures. There are surely many Americans feeling a simmering rage against the minority that has placed the rest of us at risk and degraded the quality of our nation’s life.” Krugman’s still a Fauci disciple, I’d guess, but Paul, Matthew, Mark, Luke and John, drugs are not my thing man, so get that crack pipe out of my face and pass it on to Thomas Friedman.

In closing, I don’t give a fuck about Jeff Zucker and the future of CNN, and except for maybe 100 people on “Media Twitter,” that puts me in the majority. No surrender, no exhaustion.