Keep Your Friends Close and Your Enemies at the Dog Park 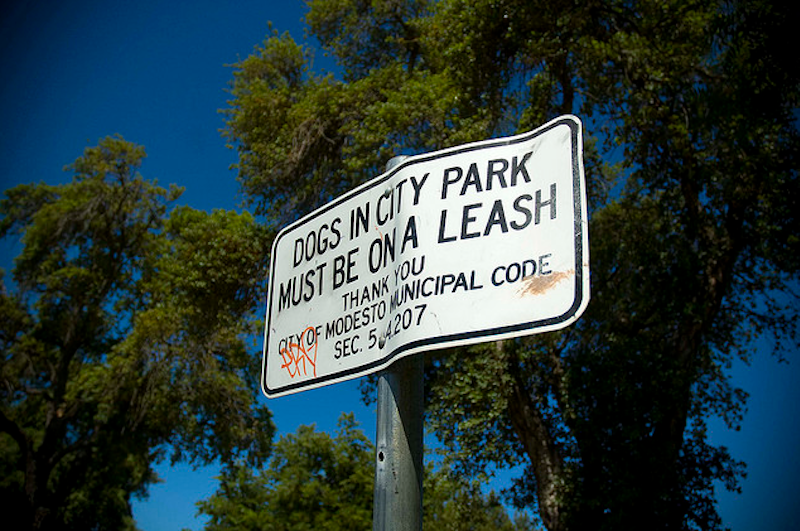 Sometimes you overhear conversations so preposterous it makes you wonder if you're getting pranked. That's how I felt recently during an interaction that seemed straight out of a bad Saturday Night Live skit. I know that doesn't narrow it down, but take your pick of crappy SNL skits and that's good enough.

The scene took place at the dog park. It was jumping with pups that day, all getting along, running and chasing each other. Normally there's an aggressive dog ruining it for everyone with barky-barks and excessive genital sniffing. However, that afternoon was pleasant, until it wasn't. Enter a heavily tattooed white man, wearing saggy pants, belted below his butt, shuffling through the gates with his furry mutt. His whiteness is key to what follows.

The man made his way to one of the park benches, my park bench, and leaned on a pole, next to me and a chatty Indian woman—Indian is key. Previous to the man's arrival I'd been exchanging small talk with her. She was friendly. Overly so: yap yap yap.

The woman didn't hesitate to engage the man, "Your dog is so cute, what's his name?" He replied, "Huh? You ask my dog's name?" Suddenly he looked at his phone, rubbed it on his shirt, rubbed it again, and then shoved it into his pocket. The woman ignored the phone-rubbing distraction persisted. "Your dog, yes, he's adorable, what's his name?"

The woman and I shared a furrowed brow glance. I was thinking maybe he wanted her to follow him on Twitter for tweets about his dog. She said, "Oh… um… well… uh… that's a new name. Why do you call him that?"

She looked to me again, her face contorted as if she was choking on flatulence.

He said, "Follow a Nigga is cute as fuck when he ain't got the shits. All you chicks be lovin' on my dog. If you was lovin' on my dick I'd be happier."

Her jaw dropped. I quickly looked away though, and just wanted to listen. She hemmed and hawed a bit more, "Uh… um… well…"

Abruptly, he turned from her and shouted to his dog, "Follow a Nigga, let’s get up on outta here!” The dog ran to him, all perky and tail waggy. He really was a cute dog.

The woman and I remained silent as he leaned down to pet the mutt. Afterward, he shot off aggressive eye contact and said to us both, "Dayum, cain't ever come here without some bullshit talking from you boring ass people." With that, he left. Waiting until he was out of earshot, the babbly woman said, "Wow, I thought only black people were vulgar like that. Can you believe this guy?" I remained silent, taking a moment to adjust to the new train wreck of her racism. She said, "He was disgusting! Worse than any black I've ever met! He was acting like he was black."

Honestly, it took everything I had to not let it rip on this woman. First, her Indian skin is darker than many African-Americans. But that never stops anyone from being racist.

Second, for her to peg the vulgar white man as the poster child of  "Everything wrong with African-Americans," was as ridiculously misguided as the pet name "Follow a Nigga."

I hadn't the energy to go Malcolm X upside her head. I called to my dog, and without another word, I left.

Upon returning home I bumped into a neighbor. I told him the story, sans the ethnicity of the perpetrators. He shook his head, and said, "Well, that black guy is obviously none too swift." I told him, "He was white. She was Indian.” He said, "Oh God, India is a shithole, no wonder she's like that."

At this point I was worn down and my mind was getting lazy. I knee-jerked it off as: ah whatever, everyone is a fucking racist. I quickly hit the computer and recounted it all in a group email to friends. I awaited reply. To my relief, none of them sent me any racial bombs. Finally, I was able to relax and laugh at the stupid situation. My email back to everyone was, "Come to think of it, the name Follow a Nigga is kinda hot."

As the day progressed, my pals joked around too, offering up other scandalous suggestions: Spank a Negro, Lick My Balls, Eat a Booty. My favorite came from a Jewish friend, "Follow a Jew Bastard." From now on I'll try to remember: if life gives me lemons, I can either make lemonade, or blame the "blacks."