I didn’t want to disappoint her. 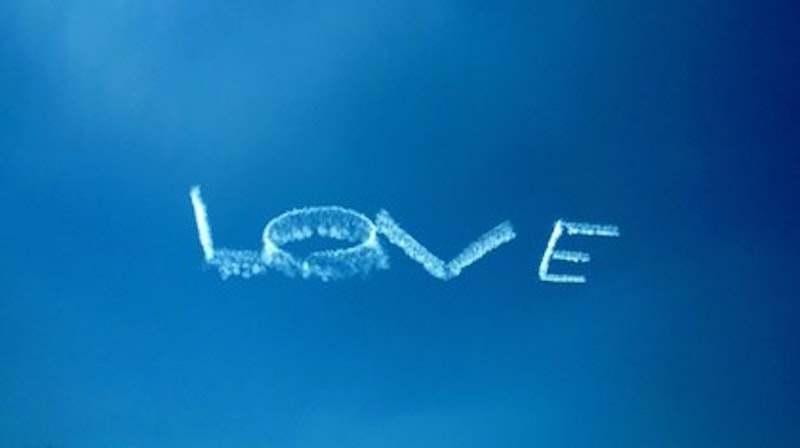 We were having a breakfast of Irish Oatmeal. I was reading the paper while I ate. It's a simple habit that I enjoy. "Would you look at me?" she asked. I lowered the paper to meet her eyes.

"When," she said, "are you gonna write me a love poem?" There was sugar and a lump of wounded feeling in her voice.

We were seated in my tiny kitchen at a blue porcelain top table that often served as my desk. Books, magazines, a box of dominoes and a jar of peanut butter had been pushed aside to make room for our morning meal. A water pipe rattled from the adjoining next-door apartment. We each wore vintage robes from the 1950s. It was cold and two burners on the stove had been left on high to cut the early morning chill.

We’d been getting along pretty well lately. She deserved a love poem. I didn’t want to disappoint her. She was a good woman. A tolerant woman. Maybe even a masochist. It was only after we’d been together for a year that she told me my breath was bad. "But, not all the time," she added quickly. "You have some hope," she said. It’s because of her that I floss. I wanted to get back to my paper. "How ‘bout it writer man?" she said.

Later that day, driving west on Beverly past Hancock Park, I saw it. L O V E. The word hung sloppily in the air. The skywriter, I imagined, must be new to the job and the word L  O  V E  probably seemed just as good a word as any for practice. She looked up from reading her book and noticed it too.

It very could've been his first ever attempt. As I sat in traffic and leaned against the steering wheel, I looked up, and judged him to be lousy at love. This skywriter must've thought that he couldn't fail, because who in his right mind would complain, who would criticize love? Me.

"Since when did Special Ed get in the skywriting business," I said.

"At least..." she caught herself and stopped at that and adjusted the radio from sports to a classic station.

Looking at the word, going backwards, the E wasn't bad, considering all the work that went into creating one line of smoke at a time. The V had a big tail on it, there was no way of getting away from that droopy tail, and the O was just some sad misshapen excuse for a circle. And finally the L. Who knows how it started out, but the skywriter was just too damned slow and by the time he was done with the E, the L looked like a blurred boiling piece of spaghetti that had been flung up against the wall of sky. L O V E was hardly recognizable. This skywriter was just plain lousy. I imagined other skywriters would cringe with embarrassment for the shame this display brought on their profession. I rolled down a window and stuck out a hand to check on the wind.

I wanted to give the skywriter the benefit of the doubt. There wasn't much of a breeze at all, but up there where he was working, maybe it was windy as hell. I brought my hand back in and rolled up the window. The bastard didn't need me making an excuse for him, but sometimes we take flight with love on our minds and in our hearts and then life will come along without compromise and have the last word no matter how indecipherable.

The light changed and as I drove on, I saw the skywriter in his little plane at work again making a new white line. The beginning of a new L O V E. Attaboy! Better luck next time.

The following day her accidental poem happened. I used to have two orange ceramic cereal bowls.  She handed me one for our oatmeal and then promptly dropped the only other one. A pained look came across her face that spoke of countless things that had slipped through her fingers. I didn’t want her to feel clumsy and at the same time recognized the moment as an opportunity to display some passion. So, on purpose, I took the one I held and smashed it on the floor and said, "Ooops!"

At first she was startled, but then laughed and gave me a kiss.

That morning I served our oatmeal on dinner plates. She still hungered for her love poem. She sprung it on me as she pushed a small lump of oatmeal across the white surface of her dish. I shoveled in a mouthful, mixed with crunchy peanut butter, and swallowed. It was kinda dry. Ordinarily I’d pour almond milk over it, but plates don’t hold liquids well. "How about it, writer man?"