He thinks about her. 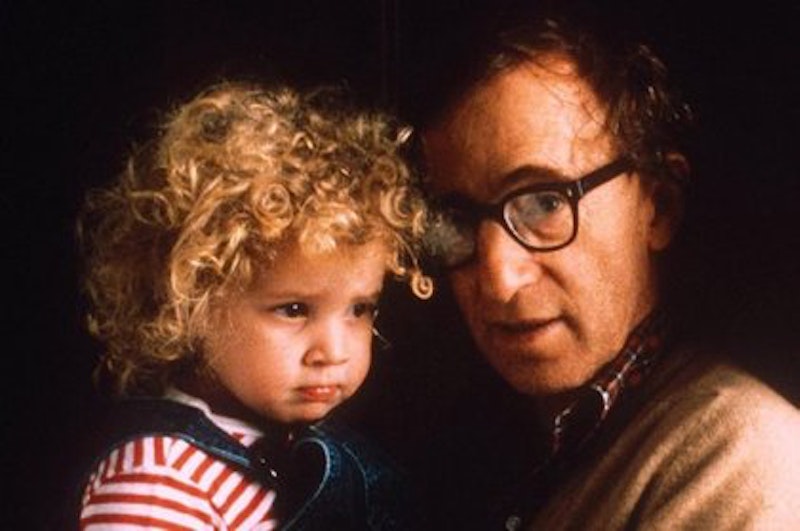 Here's something we know about Woody Allen and Dylan Malone, the woman who says the filmmaker molested her back when she was a seven-year-old named Dylan Farrow. When she was a senior in college, Woody sent Dylan a large envelope full of something or other. She says it was photographs, “pictures of me and him.” There were a lot of them, she says, and they scared her. “There was never anybody else in the pictures—there was definitely a theme going on,” she told Vanity Fair last year.

Her story had a loose end, an unexplained random bit: the envelope's return name was Lehman. But an ally of Woody's fills the gap. “During Malone’s senior year in college, Woody had an assistant whose surname was Lehman,” says the filmmaker Robert Weide. Weide made a documentary about Allen, and sometimes he would ask for this or that. The material would be sent over, and right on the envelope would be Lehman's name with the return address.

Nothing sinister at all, Weide seems to feel. But the detail does let us know that Dylan isn't bluffing about what an envelope from Woody Allen looks like. As to the contents, she says a letter came with the pictures and that it said this: “I thought you’d want some pictures of us, and I want you to know that I still think of you as my daughter, and my daughters think of you as their sister. Soon-Yi misses you.” Vanity Fair doesn't mention if anyone has seen this letter, whose text as given us is based entirely on Dylan's say-so (“According to her, the accompanying letter read,” etc.).

But Allen did go public with a similar appeal to her. Winding up his response in The New York Times to Dylan's recent statement against him, he reflected on the young woman who, in his telling, has had her life emotionally mutilated by a mother who fed her vindictive lies. “Soon-Yi and I are both hoping that one day she will understand who has really made her a victim and reconnect with us, as Moses has, in a loving, productive way,” he wrote. He wants her back, just like she said. Woody still loves her.

She's one of three children he had with Mia. Another is Moses; like her, Moses was adopted by Mia and Woody. Now 35, he's the only graduate of Mia's crowded household who has swung over to Allen's side. He says his mother brainwashed the kids against the man who ran off with their sister, the above-mentioned Soon-Yi. Woody is no doubt happy that Moses is back with him and sketching in the horrors, or alleged horrors, of life under Mia. Of course, there isn't any record of Woody Allen hoping and pleading for Moses to come back, as with Dylan. The judge who awarded Mia custody of the three Allen-Farrow children wrote about Allen's rather tepid attitude toward the kid back in the day: “Mr. Allen's interactions with Moses appear to have been superficial... When Moses asked, in 1984, if Mr. Allen would be his father, he said 'sure' but for years did nothing to make that a reality.”

We do have a public record of Allen being entirely indifferent to his third child with Mia, the boy who started life as Satchel and is now Ronan Farrow, soon-to-be television host on MSNBC. Officially, Allen put the sperm into Mia's womb and Satchel came out. But Mia tipped a wink to Vanity Fair last year that the dad might’ve been Frank Sinatra—an idea that seems piercingly probable to anybody who has seen a photo of Ronan in a suit. Apparently, Woody Allen doesn't give a damn. “I pause here for a quick word on the Ronan situation,” he writes in his Times statement. “Granted, he looks a lot like Frank with the blue eyes and facial features, but if so what does this say?” Looks like “Frank.” It's the calmest, least irate moment in a very noisy statement.

Woody then loses interest in whether this Ronan person is his son. Galloping on, he explores the flip side of Mia's little remark, namely that she's so indifferent to truth that she doesn't know whether she spent years lying to him about his alleged kid. A reasonable topic for Allen to explore, but he does so for about twice as many words as he spends on Ronan's paternity, and Ronan never shows up again in the statement. To Woody Allen, a Frank-spawned son is just a reason to mutter about Mia's lies and her behind-his-back shtupping of a lover. “Not to mention all the money I paid for child support,” Woody adds.

Woody's ally, Robert Weide, is helpful on the matter of where Ronan fits in with the young man's quasi-dad. A week or so before Woody's statement, Weide wrote in The Daily Beast about Allen's thorough indifference to anything Mia and Ronan might say about him. “Mia’s accusations were old business, and the fact that Ronan was publicly chiming in meant nothing to Woody, who hadn’t even seen his (alleged) son for 20 years,” Weide tells us. Weide says he wrote his Beast article, a defense of Allen, because Allen couldn't be bothered to take notice of this molestation flap. “His indifference to the gossip has always struck me not as a decision so much as an involuntary and organic reaction,” Weide reflects. Then Dylan published her statement against her father... and boom. Allen responded in the Times with 1860 words of reaction that appears organic and involuntary but not at all indifferent.

Dylan doesn't mean the same thing to Allen as the two boys do. He is or was the father of all three—the “was” is because of Ronan, since Allen spent four years living with the boy and at least thinking he was the kid's father. (The idea of having been somebody's father is very Allen-Farrow, one of their little world's piquant points of interest, like the fluid boundary between father and brother-in-law.) But Dylan is the one on his mind. Is it possible to be indifferent to a child after four years as his dad? Yes, Allen proves it. Whereas Woody's love for Dylan is still going strong.

He “adored” her when she was a child, Allen writes, and that seems the one point on which Allen, Mia and the various witnesses in their custody trial can all agree. With Moses, as the custody judge noted, Allen was cordial but not much involved. “Ronan I didn’t know well,” Allen writes, blaming Mia. But with Dylan it was and is all different. He was wrapped up in her and he still wants her back. It's not because she's his child—look at Moses and Ronan. It's something else.