Don't read this unless you know what happens in the first season of Game of Thrones. 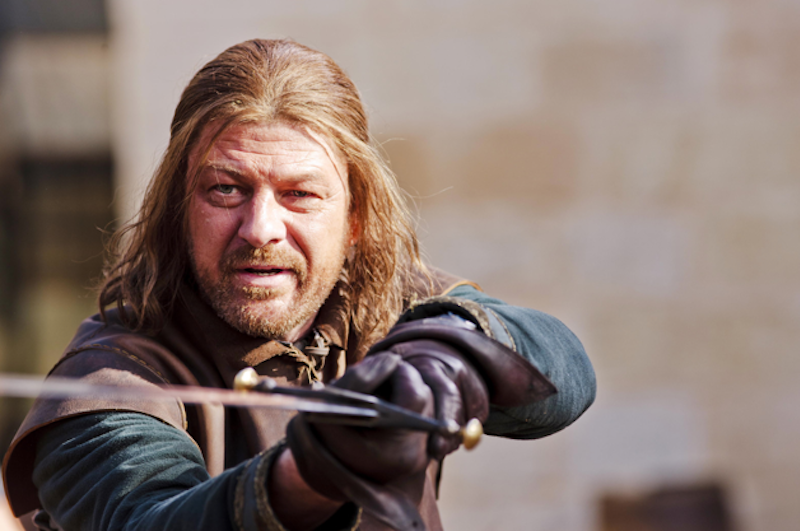 People talk about the moral complexity of George R.R. Martin, which for me is a stretch. Judging by A Game of Thrones, the first book in his series, he's easy enough about painting people as very good or very bad. Very, very bad—Joffrey and Viserys come to mind.

But the book does come through at a crucial point. This bit concerns Eddard Stark, the nobleman trying to sort out a bad situation at court. Eddard dies because of one mistake, and the mistake grows out of a weakness in his stalwart character.

We meet Stark at the beginning of the book, when he has to execute a deserter. He chops the man's head off himself. Why? “The man who passes the sentence should swing the sword,” he tells his son. Stark is a man of integrity in the original sense. He's built all as a whole and he makes sure he stays that way. When he has a responsibility, he doesn't hand it off to escape such unpleasant things as guilt and self-reproach.

But Eddard is killed because, finally, there is a job so dire he won't do it himself. This job is bribing the city guard to take his side in the mess at court. He knows it must be done, but he considers it dishonorable. Instead he gives the nod and an acquaintance—a shifty, dangerous acquaintance—hurries off to do the job for him. The acquaintance sells him out, of course. In fact, just before taking on the bribery assignment, the fellow explains to Eddard why he thinks that everything Eddard wants for the kingdom is all wrong.

If Eddard had followed his own principles, he would have made sure the money bought what it was supposed to. If necessary, he would have placed his sword to the acquaintance's throat and kept it there through the proceedings. Heroes can get tough when big things, like the kingdom, are at stake. (The situation in Game is that the king has just been killed by the queen, who's passing off her bastard child as the king's heir and thus the new monarch.) But Eddard shied away from the idea of himself as bribe giver. He knew it had to be done, but he just couldn't see himself as the one who did it. Inside his head, he gave a quick, miserable shrug and shut his thoughts down. He would think of nothing, not even what might hit him if he trusted his fate to a conniver who thinks he's wrong about everything.

People may argue about whether Eddard was stupid, and the book's TV version has some cheeky lines where enemies hurl this sneer at him. Personally I don't think the book presents Eddard as being dumb; after all, he's the one who figures out that the king's alleged children don't look or act anything like the king. When Eddard gets conned he's being foolish, and that's not the same as stupid. An idiot lacks the brainpower to process information; a fool decides that crucial information can be left out because it feels bad.

This is a failing of character. Lord Eddard chose not to think, and he made the choice out of vanity. I don't remember his showing any other signs of vanity in the book. But that's all right. Everyone is weak, and the interest is in seeing where the weakness comes out. Eddard Stark, noble as he was, found something he could lie about: his own honor.