Within the greater context of the Kamandi series, “The Legend” is a major moment that summarizes the hopelessness seeded by The Great Disaster. 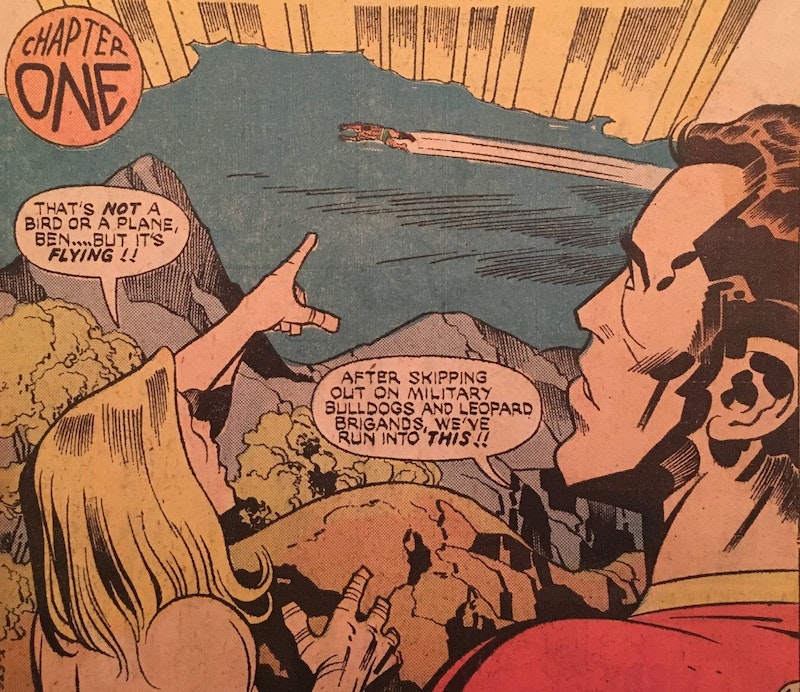 With a steady barrage of hype a prodigal hero can attain all-powerful significance regardless of whether their return could happen today or a billion years from now. Kamandi The Last Boy On Earth no. 29 brings this dynamic to life in “The Legend,” a classic Jack Kirby opus that entwines morality, religion and post-apocalyptic neurosis to create an eccentric tribute to Superman.

Fresh from their military adventures with Captain Pypar, Kamandi and his mutant compadre Ben Boxer venture deeper into the tropical expanse formerly known as the Canadian borderland. There they discover a “lost tribe” of ape mutants who worship an entity that bears close resemblance to Superman. The apes refer to this idol as Mighty One. The being’s power hinges on one major feat involving a global cluster of volcanoes whose mass eruption helped kick off the apocalyptic Great Disaster. Legend has it the flying super powered Mighty One capped each of the volcanoes with boulders and in the process formed a new continent. The entire myth is re-told in a sequence designed to look as if it’s been carved on ancient stone tablets, Kirby’s way of emphasizing Superman’s status as a megalithic cultural influence.

It’s implied that Mighty One could’ve died during The Great Disaster. Nonetheless, the apes believe that his spirit is alive. They devise a series of Herculean challenges to test the worthiness of anyone who claims to have a soul possessed by the entity. Whoever wins the competition earns eternal respect from the tribe and the right to wear Mighty One’s costume—a sacred honor that only strengthens the egomania of the pompous ape-thug Zuma who swears that only he can be the new Mighty One.

Here’s where the Superman connection becomes undeniable—the costume looks exactly like The Man Of Steel’s outfit. It’s stored in an underground labyrinth engulfed in what appears to be a coal-seam fire. Before the contest ends Zuma steals the costume causing Superman fanatic Kamandi to make a reckless descent into the flames. Blasted by anxiety and horror, Kamandi becomes obsessed with getting the Super Suit back to its hiding place where he believes it must wait for its rightful owner’s return. Kirby presents this burst of anti-crime fervor as hero worship gone wild. The Last Boy On Earth appears on the verge of tears throughout the sequence exclaiming, “We can’t desert the Mighty One!… I know that somewhere he’s still alive… not even The Great Disaster could conquer him.”

Zuma’s determination to become the new Mighty One transforms him into a villain controlled by hatred and jealousy. Kamandi’s respect for Mighty One leads him to great heights of bravery and loyalty. Sparks fly when a symbol of the heroic ideal falls into the wrong hands. “The Legend” encapsulates this chaos by exploring the best and worst consequences that can come from devout hero worship. To those who cherish Mighty One’s memory, Zuma’s selfish attempt to assume the super hero identity is just as shocking as a slimy demon claiming to be Jesus Christ. Zuma’s threats against Ben Boxer’s life, the ape man’s insane temper tantrums, and his childish refusal to admit defeat stand in stark contrast to Mighty One’s mythic benevolence. The villain’s actions represent a delusional hypocrisy that’s plagued organized religion for centuries.

Within the greater context of the Kamandi series, “The Legend” is a major moment that summarizes the hopelessness seeded by The Great Disaster. The day-to-day reality of a world built upon the dashed hopes of the past erodes self-confidence and fuels cynicism. It leaves the emotionally vulnerable stuck in a neurotic/hyper-defensive state. The cult of The Mighty One and their careful preservation of the entity’s sacred Super Suit are powerful reminders that hope and heroism can never die even as tragedy scars every last shred of existence.