The Chase super-heroine in everyday life. 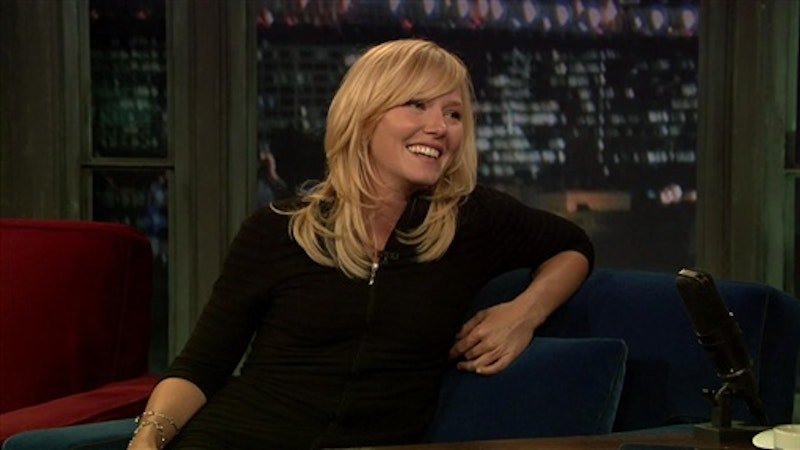 After considering herself in the bathroom mirror—from various angles, in assorted humors, hair tousled, tied in a bun, even cornrowed—for the better part of an afternoon, a nonplussed Kelli Giddish arrives at a kind of uneasy acceptance regarding the severe contours of her face, which resembles a hatchet.

Kelli Giddish, to the homeless woman, forcing the Whattaburger into her hands: “I’m sure. Take it, and eat. It’s delicious.”

And they sit there like that for a while, on a curb during the bustle of lunch hour, side by side, incongruously matched but not ironically so: the homeless woman devouring the burger and lapping at the wrapper, Kelli Giddish touching up her makeup, perfecting her silicone pout for a promising callback. And now the homeless woman is delivering a histrionic, hard-luck soliloquy about how she’s living, or surviving, on Skid Row, how she came to dwell here, how everything fell apart.

“I guess I hit a bad patch,” the homeless woman concludes with a sniffle, examining her worn moccasins. “I’m between jobs, stuck in limbo.”

“Yeah,” Kelli Giddish smiles, adjusting the RayBans perched on her head. “I think know where you’re coming from.”

Would Kelli Giddish be surprised to know that immense, panting fandom of Chase is en vogue in lipstick lesbian circles?

In a New York Times think-piece last fall, wherein floundering, lead-less reporters grapple with trends conducive to the beats they cover, television critic Alessandra Stanley spent two dozen column inches condemning Chase for the continuing emasculation of the traditionally rugged American male, noting the hard-edged, swinging-dick swagger with which Kelli Giddish and co-star Rose Rollins comported themselves in contrast to their softer, more restrained male cast-mates: their brashness, their recklessness, their rock-solid biceps, the tendency of the Chase costuming staff to outfit them in uber-masculine, sleeveless black armored vests. Stanley’s excoriating critique hinted that Kelli Giddish might be transgendered, which did not go over so well in Kelli Giddish’s hood.

Sometimes, after a few glasses of Ketel One, Kelli Giddish dials random telephone numbers and pretends to be an enraged, jealous husband attempting to find his adulterous wife. Kelli Giddish is devilishly convincing with these calls, her voice deceptively deep, concave even, and is indirectly responsible for more restraining orders and bruises and heartache than she’ll ever know.

Under polite duress, Kelli Giddish will admit to envying Natalie Portman, if not for the expected reasons. Kelli Giddish does not envy Natalie Portman her roles in Black Swan, or Heat, or Beautiful Girls, or those expensively sensual perfume commercials, or the Harvard thing, or the fucking a ballet dancer thing, none of that.

Kelli Giddish is jealous of Natalie Portman because Kelli Giddish believes that “Natalie’s Rap” should have been hers.