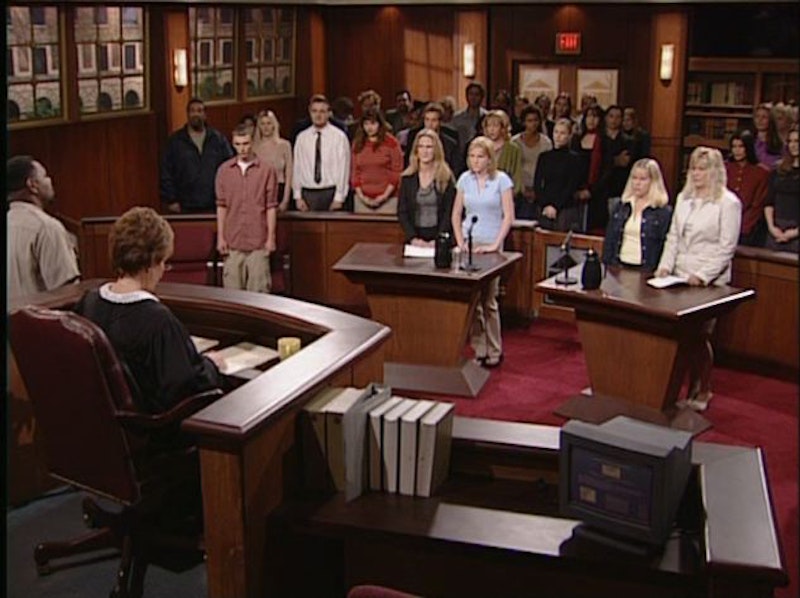 Television shows like Law & Order: SVU, Peoples’ Court, and Dateline play off our desire for justice, the natural craving we have to see evil punished and the underdog succeed. We’re supposed to cheer on the arrest of accused sexual predators and murderers, or the public embarrassment of someone caught lying in court under oath. No one would argue that these people don’t deserve what they get, but for whatever reason I’ve always felt the strongest sympathy for the “villains” of these shows, and hope they’ll get off.

Maybe it’s gullibility, but I’m inclined to give the benefit of the doubt to the perp. Can you imagine the hell it would be to rot in prison knowing you were innocent? It’s like being buried alive—a situation that presents you with your own death and leaves you no alternative. Wrongfully imprisoned is a real phobia of mine, perhaps because of some weird inherent guilt. Whenever I see that suspect squirming in that chair, I can’t help but feel some sympathy for them, like I’ve been there. There aren’t any body parts in my basement, but we all know how uncomfortable it is to be trapped in a lie you can’t get out of, no matter how minor.

The other day I came upon my mom watching an episode of Peoples’ Court and got dragged in by a particular case. An elderly woman was accusing a young Brooklyn car specialist of ripping her off over some repairs after they were involved in an accident. The guy, squirrely and greasy-haired, supposedly extorted more than $1000 out of the woman, but he claimed to have no idea about the charges or the car involved, and blamed it on an employee at his company. The dude stuck to his guns until the very end, even after the bitch judge shoved photographic proof in his face, showing a car with his license plate at the scene of the crime. “Look at this. Look at it! THAT. IS. YOUR. CAR! How do you explain that?” “I’m sorry, I don’t know, your honor.”

And the weird thing is, I can’t help but feel for the guy. He’s publicly humiliated on national TV, verbally castrated by a celebrity judge, and out $3500. He ripped an old lady off hard, and certainly wasn’t the best liar, but man, what if that was me? It sounds terrible, but I sympathize with TV’s reality villains, the scumbags we all love to hate. I don’t enjoy watching people go to jail, and there’s a part of me that just wants to see them all walk, if only because I always imagine myself in the slammer, rotting away forever.