Katsucon: A Gaggle of Nerds 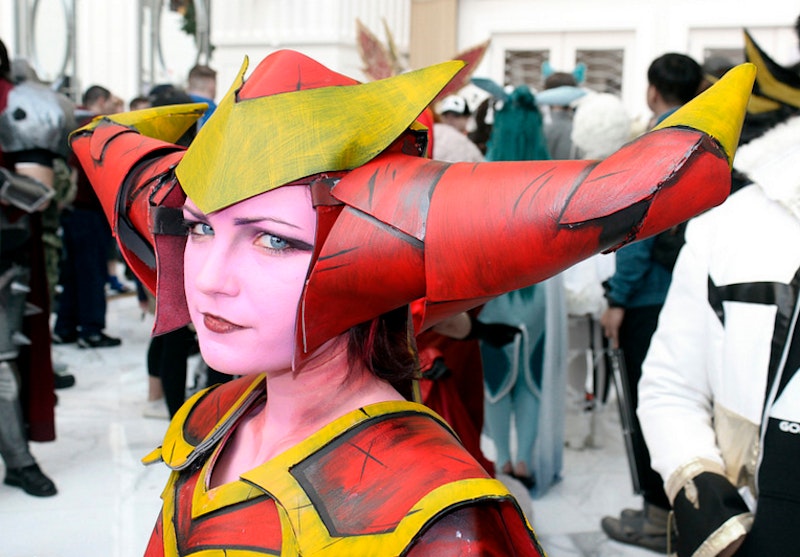 Katsucon is an annual convention held at the National Harbor's Gaylord Convention Center, just south of D.C. It’s advertised as an anime convention, but cosplayers of all fandoms (cartoons, movies, video games and comics) show up en masse. After hearing about it from longtime Internet friend Felicia, I decided I’d have to go to finally meet her and other friends in person. Crowds and overpriced alcohol aren’t appealing, but experiencing a convention and going outside my comfort zone was enough to justify it.

It’s not required to attend a convention in character but I threw on the same character pieces I used last Halloween. Unlike a lot of other cosplay where countless hours of hard work are spent crafting, I used liberal amounts of concealer to mimic a scar over the eyebrow, popped in green contacts and called it a day. Anyway, the point of cosplay is that it’s for everybody. The culture encourages all experience levels, shapes, and ethnicities to participate. It’s never a competition, unless you want to see who can compliment the other craftsman more.

Walking into the Gaylord was like opening up the gates to heaven. Except instead of God, there was Kylo Ren pretending to force choke a Rey cosplayer while a bystander took photos. The lobby wasn’t as crowded as I’d anticipated, but that didn’t diminish the intimidating task of walking through the throngs of characters, stopping every so often to pause and glance around. Seeing video game characters that I loved stopping to lean against a wall to catch their breath or the anime protagonist I had a crush on in middle school eating a sandwich, was both strange and wonderful. You have to remind yourself that these are normal people who are having a good time and yes, it’s okay to have a mini-stroke every time you see someone from Mass Effect.

I found my online friends and we exchanged variations of “I thought you’d be taller” before making our way through the rest of the convention floor. Certain places were off limits without a badge, but unless you were interested in panels or visiting the dealer’s floor it didn’t matter. The rest of the afternoon flew by, with most of the time being spent following Felicia and Jenny around trying not to get lost. It’s fun to watch cosplayers really get into character, especially when being photographed. Dressed as Imperator Furiosa from Mad Max, Felicia was stopped every so often to have a photo snapped.

The convention atmosphere was welcoming and carefree, and everyone was so kind. It’s exciting to be surrounded by people who are all nerds; there’s zero judgment. There were high-fives, hugs, and compliments all around. The rest of the day was a blur—a few shots of booze, plenty of laughter, and a lot of hanging out. Any fears I had prior to meeting my online friends melted away when they took jabs at my demeanor or asked about the events going on in my life. It was wonderful being able to meet Felicia, Jenny, Andrew, Louis, Jen, and Adam. Thanks for thinking that I’m cool in person as well as online.