Jerry Seinfeld Has Had It With Faces 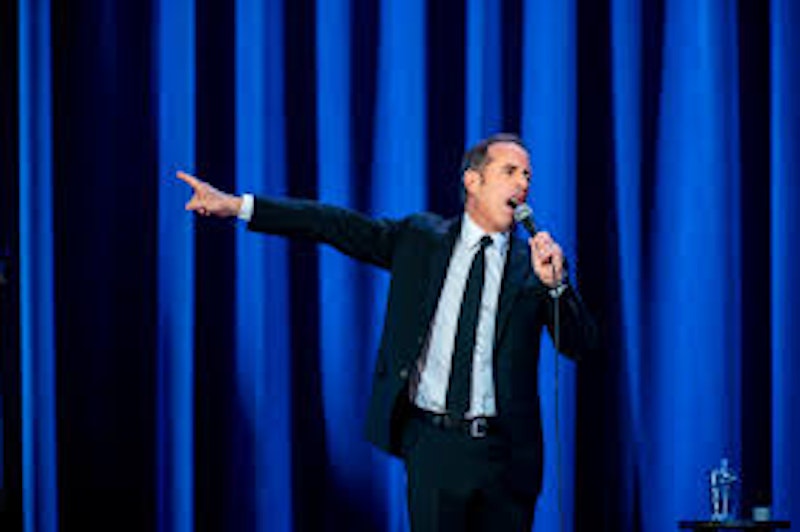 Jerry Seinfeld is a covid kind of guy. He’s always been ready for the new era. “Why would I want to get information from a face when I could get it from a nice clean screen?” he asks in his latest Netflix special, 23 Hours to Kill. “Don’t you feel uncomfortable now, faces come up to you?” He mimics someone talking, somebody with no motor control and a great insistence on being heard. Then he delivers a reeling catalogue: “Their lips and their teeth and their gums and their… There’s a missed shaving spot, there’s a piece of crust, some goo, you see a little lunch remnant in their teeth.” Now Seinfeld breaks into the voice of a fed-up regular guy, the kind of voice comedians use when reacting to a dumbass commercial. “Just send me an email about this, would you?” he says. “I can’t do it anymore.”

The special was done before the virus hit, so the above is from a routine about texting vs. talking. Given that Seinfeld gets decades out of his routines, he may have started this bit the year after iPhones came in. Here’s another one from the special: “But that’s what marriage is. It’s two people trying to stay together without saying the words ‘I hate you.’” Seinfeld said that in 2009, at the White House. He said it in front of Mr. and Mrs. Obama. Seinfeld’s done just fine—no, he’s done phenomenally well—by being both our coldest and our most accessible comedian. That cold goes deep. In his new show’s first seven minutes, he examines and dismantles the idea of going out, of being entertained, of expecting anything to happen that will suddenly make your life fun. “It’s all things we do to convince ourselves our lives don’t suck,” Seinfeld says. But suck they do, inevitably, and that includes his. “Never feel bad that your life sucks,” he winds up. “The greatest lesson you can learn in life: Sucks and great are pretty close. They’re not that different.” Meanwhile, the audience keeps laughing.

When other comedians play the come-on-folks-let’s-level card, they talk about toilet splatter or pussy farts. Seinfeld gets in much closer. He harps on the disadvantages of being instead of not being, with special attention to being a person stuck among other people. Yeah, faces, what’s the deal with having faces? And friends—“Why are your friends so annoying? The people you have chosen to be with in life. It makes no sense.” He looks at zero-based budgeting for human sociability: “You’d get rid of all of them in a second if it wasn’t an even bigger pain in the ass to find new people, learn about their annoying problems that they never do anything about… ‘Aw, the hell with it, I’ll ride it out with these idiots.’” A lot of comedy routines have an unspoken premise: I should be able to fuck whoever I want, or it’s embarrassing to have a body, or there are too many dumb people. The premise of 23 Hours is that it’s too bad other people have to be there instead of not being there. Over the decades, working this kind of material has given him a following like McDonald’s.

The comedian is now 65, something he announces in his act. The bottom sixth of his face has gone pudgy, so his features sit atop a pontoon jawline. Meanwhile his hair has climbed back and up and somehow turned dark as shoe polish. Otherwise he’s much as ever: slender and suited but reedy and cawing, and frequently impatient with us. Seinfeld’s act may acquire different shades—more jaundice in this decade, more Sugar Pops in that one—but you’re going to hear micro truths drummed home in his assortment of rhythmic, nimble voice patterns, the arsenal that a generation of lesser talents cloddified into their consonant munching and up-down, who-are-these-people intonations. Seinfeld, that strange man, has turned himself via Scientology and TM (and years of work) into a perfectly tuned provider of spoken observations that make massive numbers of people laugh. He’s even annexed physical comedy, and in 23 Hours he hits a series of one-man tableaux to punctuate his act. They’re all good, but I recommend the chimp-men playing in the dirt before the arrival of Pop Tarts.

Seinfeld’s weakness remains the same: the screeching voice-break that acts as his most forceful punctuation. “We had toast” becomes “We had tOOAAAast,” and his voice rips a little for effect. It hurts to hear, but he’s been doing it forever. All of 23 Hours has a forever feel to it. He’s 66 and talking about Pop Tarts. His first bit that ever worked was a word-ditty about “left” (“left feet, left-handed compliment, ‘What are we having for dinner? Leftovers’”). Forty-five years later, there he is on Netflix doing more word-ditties: “As long as we know what’s what and who’s who, whatever happens happens and it is what it is.” They work too. Everything but the screech has worked for 45 years. He’s figured us out that well, and if he’s been saying we’re tired of faces and just want screens, the old man may be a prophet of the new age.