IT's Hard to Forget 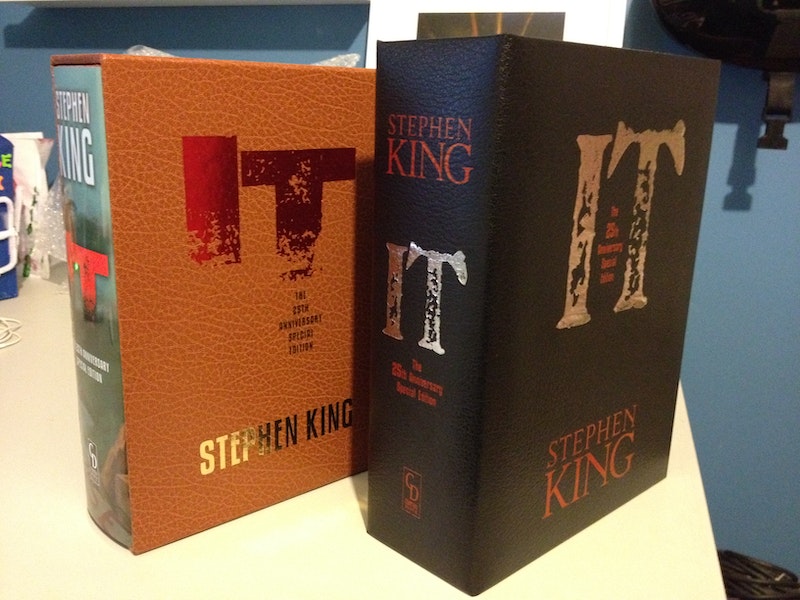 If you're a Stephen King fan, you probably recognize that line. It's from IT, King's evil clown book. The line is a parenthetical half imaginary declamation by a doctor, who’s telling Eddie Kaspbrak's mother that her son doesn’t have asthma, and that he’d be healthy and happy if she’d stop smothering him.

I'm not a Stephen King obsessive. I've read a bunch of his books over the years, and enjoyed them to varying degrees. I think I first read IT when it came out in 1986; I would’ve been in high school then. It was not a favorite. I was an asthmatic kid myself, and the illness was definitely not psychosomatic; King's psychobabble explanation is stupid and dangerous, and I resented it even at the time. Also, the evil clown is actually a giant space spider? Seriously? There were other problems too, and while I did finish it, I never reread it. There's a movie version coming in September, though, and in anticipation I picked it up again. It's been three decades, but I remembered that "let him RUN" bit almost word for word.

That line isn't the only thing that came back to me with eerie clarity. I had a vivid memory of some of the horror set pieces: the giant, black bird which opens its mouth to reveal orange clown pom poms on its tongue, or Ben Hanscom looking down from the bridge to see the clown's circus balloons floating towards him against the wind. But I also remembered small, pointless details, like the fact that Stanley Uris' wife watches Family Feud and is sexually attracted to Richard Dawson. Or snippets of prose—"Is that what they pay you to watch the lighthouse, Mike?"

I don't know why so much of the novel is lodged in my head. I still wouldn't say it's one of King's best—Salem's Lot is much superior. IT is way too long, and the clown's power is often pat and silly—werewolves and creatures from the black lagoon are even less scary in my mid-40s than they were when I was 15.

It's possible that the book's sexual content is part of why it's stayed with me so long; there are a few outright pornographic passages, including the infamous underage group sex scene towards the novel's end (which I can't imagine they're going to stage for the movie). I don't think I'd read very many explicit novels at that point in my life. It may well have focused my attention.

But I also think that King has a gift for images and even turns of phrases. The novel is about that gift in part. The plot involves seven kids who confront a monster in their hometown of Derry, Maine. Then they grow up and forget all about it, until they're called back to fight it again. One of them, though, doesn't quite forget: Bill Denbrough becomes a novelist, and spends his life writing about evil terrors menacing children.

Bill is clearly a self-insert character—there’s a whole section in which King tees off on MFA programs and how pompous and ridiculous they are and boasts about his own pulp success. You'd think that as the most famous writer in the world, he'd have made peace with his detractors. His description of one MFA story involving a cow pushing around a can in a possibly post-apocalyptic landscape is particularly vicious and amusing—and memorable. I'd thought about it, on and off, over the last 30 years, and was startled to come upon it again, almost exactly as I'd recalled it.

IT is about King's own obsession with his childhood and its varied fears and memories. Like memory itself, the novel’s kind of a mess, with extraneous details overwhelming important ones, and odd prejudices and misinformation seeping over actual events like a fog. But like memory too, the novel has a weird power and persistence, not in its overall effect as in striking moments, or words, or images. IT is not a classic in the usual sense, but reading it you can see why King is so phenomenally successful. He's got a talent for reaching down there into the buried muck, and coming up with something you can't forget.