As visible as it is, hair is also really personal. 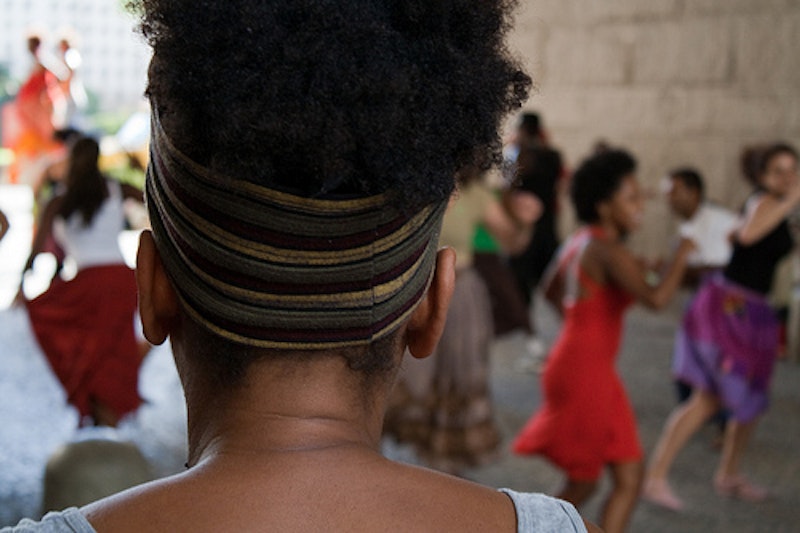 When my cousin Shonté arrived at my doorstep in New York, she had a bird’s nest on her head. It wasn’t like a couture bird’s nest—because that would have been fabulous. This was a lace front wig. I took one look at her, smacked my lips and said, “Girl take that hot mess off your head right now. And if you don’t, I’ma do it for you.”

Protest. Then, “What, you don’t like my lace front?”

“No! The shit looks fake, and I can see the net in the back. You ain’t foolin’ nobody.”

Wig’s on the floor, where it belongs.

When she took it off, I saw a beautiful head of natural, kinky hair. I said she should wear her hair just like that. Natural. I told her that without the wig, her neck was longer, her skin clearer, and I could see her whole face without being distracted by a wild bird’s nest.

She resisted: “I don’t feel glamorous without my weaves.” This comes from a young black woman who grew up in pageants, who worships Beyoncé, and who believed that unless you had long, flowing, straight hair, you were not beautiful.

It took a lot of convincing, but now my cousin is proudly weave-less. She wears her natural hair in a variety of styles, but mostly as a sassy, teased out Afro, a really popular look among black women in New York. Because the glamour wasn’t on her head anymore, she turned to huge chunky earrings for that dramatic pop. Loves it.

But why did it take so much convincing and arm-twisting to get my cousin to embrace her natural hair?

First of all, I don’t think anything is wrong with weave. I love me some weave—when it’s done right. Personally, I think we should all wear weaves and walk around with a fan blowing at our faces for extra fierceness. Has anybody ever talked about why some divas—Beyoncé especially—always have that damn fan blowing their weave when they perform?

A lot has been done, culturally, to make sure that whiteness is the standard of beauty for all. And you know what that means: light, blemish-free skin, and long, flowing, straight hair. Throughout history, women and some men have gone through a lot to get that pop of glam. Poisons and other home remedies were applied to the skin under the pretense that they would make you beautiful. Madame C.J. Walker, for instance, in addition to hair-straightening relaxers, also produced skin-lightening creams for black women. Some scholars have argued that this was a way for black women to “do” whiteness, and others have suggested that having straight hair and clear skin was less about trying to be white than about respect. In either case, till this day you can pop into Duane Reade or wherever and pick up a skin lightener.

Then, the Afro or the “natural” became the hairdo everybody recognized as the symbol of the Black Power movement. Wearing an Afro meant that you just let the hair grow free, wild, as a resistance to standard ideas of beauty. But this doesn’t make sense unless you know that prior to the Civil Rights Movement, black women almost never appeared in public with natural hair. It was always pressed or relaxed in the name of respectability. So with Black Power, the Afro became the iconic resistant black hairstyle, and having any other ‘do was like sending a signal that you didn’t really want to be black, that you preferred European-style beauty.

The funny thing, though, is that nobody wears an Afro in Africa!

From movies documenting black hair politics to all the stereotypes about “good” hair, even within the black community, everybody seems to have something to say about hair. Hair is important because it’s one of the most visible things about our bodies: it’s the first thing we lose when we get old; it turns gray when we least expect it, and if you don’t wash it, well, it smells.
As visible as it is, hair is also really personal. Weave is installed so you can’t “detect” it; people are embarrassed to have dandruff or even a bad hair day. And in one of my favorite YouTube videos, the winner of the Miss Gay Brazil drag contest gets her weave snatched right off her head. Right off her head—and on camera! Her neck rocks back—weave-lash—and she covers herself in total embarrassment.

Girl, why you embarrassed? It’s not your real hair!

You know, the thing that bothered me about my cousin’s obsession with weave wasn’t so much that she wore it, but more that she was so afraid and ashamed to wear her natural hair at all. I would never tell anybody not to wear weave, especially if it suits you. I was just shocked by her fear of letting it all out, of unveiling the illusion that all that fabulous, straight hair was her own. Such a protest says a lot about the power of beauty and race.

Just promise that when you do decide to “put a weave in it,” make sure it’s in good! I don’t want to see any tracks, or else I will sneak up behind you and snatch it right off.