I desperately want to be a hipster

"Are you being sarcastic, dude?"  "I don't even know anymore." 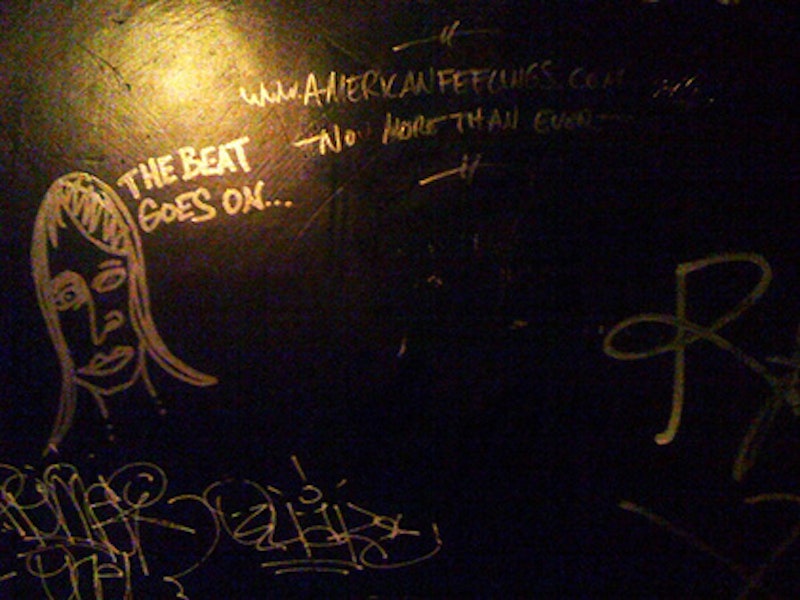 My basic impression of the American hipster:

You moved to Portland six months ago after graduating from Smith with a degree in queer studies. You haven’t found a job yet, but you’re not sweating it because volunteering at Reading Frenzy for three hours a week totally counts. Your rental is down the street from Beth Ditto but you never even bother her when you’re walking your dog Milk. I mean, fame’s just a construct, right?

You plan on using those rotten bananas in the freezer to make banana bread for the next potluck. Last year it would have been vegan, but now you’ll probably throw some bacon in. You’re on the microbrew train even though sometimes you just want a fucking Corona Light. You’ve recently switched from Camel Lights to American Spirit Yellows to Bali Shag, but you totally support smoking bans. Your boyfriend looks like Stonewall Jackson with the beard he's been working on for six months. Part of you regrets your Banksy tattoo, but it’s cool because it marks a time in your life, you know? You really, really want to be in Do & Don’ts, which is a secret, but not as bad as you want to move to Montreal, which is not a secret. SXSW was way more manageable this year since you finally got an iPhone.

As far as I can tell, the first rule of being a hipster is to never admit that you are a hipster. My ex-girlfriend used to casually refer to herself as a hipster, and, worse, as a Brooklyn hipster, even though she only lived there for six months. Self-identifying as a hipster is not just obnoxious, it automatically precludes your membership in that special, cloistered world. I think of this when reminding myself that I shouldn't really care that my ex is already dating. Her house had ants, her vagina tasted like green beans cooked in fatback, and she called herself a hipster.

Even though I want to be a real hipster and not an Urban Outfitters hipster, I am neither. I rarely listen to music, for instance, unless it's Sinead O'Connor or that Jay-Z song about New York, and that's only when the NPR pledge drive is on. And even though I'm fundamentally too lazy to keep up with what's hip and what's not, I try. My pants are so tight that my feet look like those of a Great Dane puppy, far too large for my body but not as cute. I talk about how truly functional my fanny pack is, as though I personally re-birthed 1980s fashion instead of copying the people who really did re-birth 80s fashion. I not only have tattoos of inanimate objects, I also have the word brunch tattooed on my forearm. I go to art openings, not because I like art but because I like people who like art.

I want to be one, and yet, I talk acres of shit about hipsters. I lived in Portland for a couple years and left in part because my girlfriend kicked me out and also because I was tired of feeling like I was president of the high school quiz bowl team again, ignored by everyone except those even less cool than me, most of whom had mild Asperger's. Everyone in Portland was hipper than me. I would walk into bars and immediately walk out because most of my clothing was cheerful shades of blue and my only tattoo at the time was a tramp stamp of a Christmas tree, which would have been ironic if it weren't so ugly.

The one thing that I have in common with genuine hipsters is that I've managed to stretch unemployment to impressive lengths. I shouldn't be able to pay my rent, much less buy this iPad—which, by the way, is most functional as a surface to snort coke off. Like hipsters, it's not that I can't work but that I don't think I should have to work. At the age of 27, I have never kept a job for longer than eight months and that was just because I was 16 and needed money for a fake ID. I'll take whatever handouts your taxes afford me and trade food stamps for bong hits when needed. My days consist primarily of waking up early, not knowing what to do with the morning, sleeping for three more hours, and then reading Pitchfork so I can contribute to conversations about Xiu Xiu without actually listening to the music. When everyone else is getting off work for happy hour, I'm getting dressed for happy hour.

The one saving grace on my mission to be a hipster is that I live in a small town. It's a progressive little cluster with plenty of gays and co-ops and an awesome farmer's market, but we are far from the nearest Chinatown bus. And while there is plenty wrong with living in a small town—most notably, social incest; that is, everyone bones each other—we are so far from anywhere hip that it's easy to at least play hipster. And so I fake it. I walk around town in sunglasses that make me look like a Blues Brother, tattoos showing, u-lock in my back pocket. I try to project the pheromones of the hip. Who is that? I want people to think. She walks around like she is too good for everyone. She must be.

I want this because the life of the hipster is glamorous and petty, both of which I aspire to be. I imagine that to be a hipster is, fundamentally, to be popular, to be the captain of the cheerleading squad but with a band and a coke problem. I want to be the one doing a track stand at the red light instead of the president of the quiz bowl in her mom's mini-van, looking from behind with longing and disdain, wishing not to have to fake it.