A Thank You to Frank Frazetta

The master fantasy illustrator passed away yesterday at the age of 82. 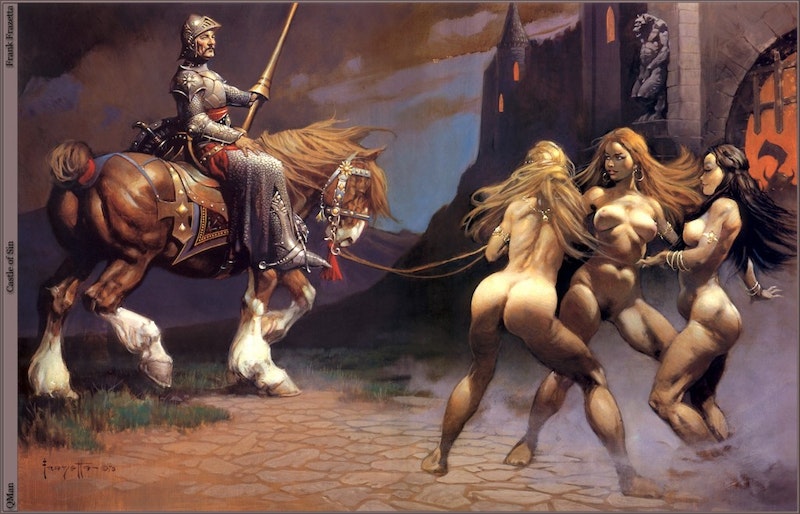 His was a world of gloriously round asses, impossibly masculine physiologies, and monsters with claws so sharp that you wouldn’t feel them pass through you. Without Frank Frazetta, we would not have a vast portion of the illustrative art that we enjoy today, but instead of listing the traditional encyclopedia of accomplishments and calculating the ripples that he sent outwards, I just want to say thanks.

By all accounts, Frazetta was the kind of artist I’ve always aspired to be: making awesome stuff with an unpretentious shrug, and then making more awesome stuff. He captured a visual intensity in augmented realism that few other artists have managed to capture, and you want to bang every woman (or man, if that’s the way you go) that he’s ever painted.

This unabashed sexuality sold countless science fiction and fantasy paperbacks, regardless of the author or the content of the books themselves. By his own account, Frazetta didn’t even read the books that he painted for -- he just assumed that there was a hot, enslaved, mostly-naked chick in there somewhere, and probably a dude inflated with muscles and a gleaming weapon, and no one ever proved him wrong.

He’s a man who completely embraced the fact that he became synonymous with the cheesy fantasy novel cover, and went back and painted even harder: more voluptuous women, bigger muscles, and freakier monsters.

Frazetta captured light like no one else, and he was bold enough to create anti-heroic figures out of negative space. He’d make animals scream with half-human, often ridiculous expressions, and he did it all with classical sensibilities. Do those warring space women need to be naked to fight? Absolutely not.

While the last couple of years have been a hurricane of legal woes and battles between various members of the Frazetta family, which included Frazetta’s son breaking into the Frazetta museum by smashing it with a backhoe, the entire family finally made peace last month in a resolution that reportedly brought contentment to everyone involved. All of this happened just in time for Frank Frazetta to witness his family at peace before he passed away after a Mother’s Day celebration at the age of 82, less than one year after the passing of his deeply beloved wife.

Thanks, Mr. Frazetta. You’ve been a deeper part of my development than I can quantify. I hope you’re painting pale chicks with big butts in heaven.