Twilight, et al, have lost the thread that made vampires so compelling in the first place. 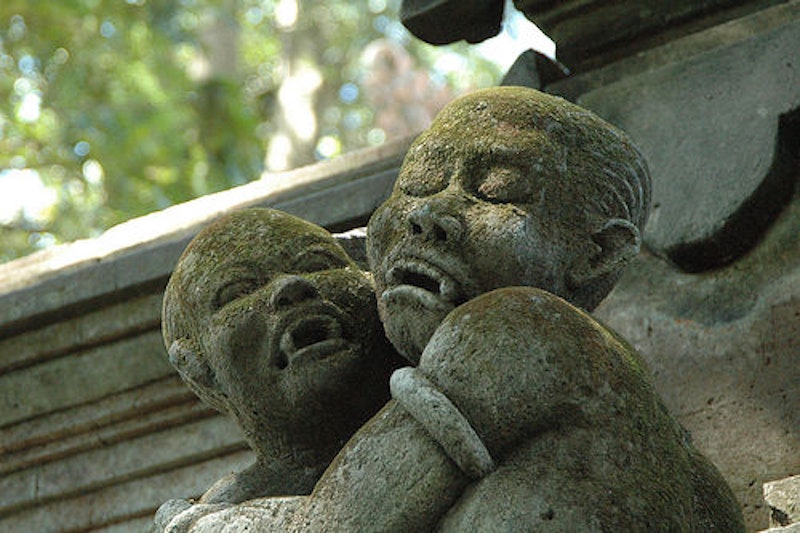 Lately, every time my teen-aged daughter and I go to the bookstore, we find the shelves stocked with a plethora of vampire books. Not the evil vampire; but the moody, broody, hotter-than-heck, "don’t want to turn the feisty heroine into the undead" kind. The fantasy sub-genre vampire romances are flying off the shelves, in both young adult and adult categories.

The vampire, a romantic hero? According to Caity, the untypical teen: not! “I don’t like them,” she said, teeth gritted, as she tossed another “promising title turning out to be about hottie vampires” reject into a growing pile.

Many adults are getting in on the act. Not only do moms devoted to Twilight abound, they have their own adult vampire romances to read, too. Fans devour Charlaine Harris’ Southern Vampire series and J. R. Ward’s Black Dagger Brotherhood books, while Sherrilyn Kenyon’s Dark Hunter novels and Christine Feehan’s The Carpathians books are very popular. The vampire as hero in today’s romance novels is here to stay.

What accounts for the genre’s astounding popularity?

Myths and legends about vampires have long existed in almost every culture. The Mesopotamians, Babylonians, Hebrews, Greeks and Romans all had tales of demons considered to be the precursors of vampires. But stories of vampires as we know them today mostly arose during the 18th century from Southeastern European cultures, when oral traditions first began to be written and reported. According to the beliefs of that time, vampires were usually revenants of evil beings, suicide victims or witches, but could also be created through possession by a demon or the bite of another vampire. Belief in vampires became so strong in these parts, it caused mass hysteria, and suspected vampires were publicly executed and corpses staked through the heart.

Vampires, as they developed in folklore, were evil creatures without souls, foul and decrepit in appearance who existed by drinking the blood of their victims. They could not see their reflections in a mirror, cross running water, or step on consecrated ground. A vampire could only enter a house if it was invited, but once in, could come and go as it pleased. Although not then considered to be vulnerable to sunlight, vampires were thought to be more active at night.

The charismatic and sophisticated vampire of fiction made its appearance in 1819 in “The Vampyre,” a short story by John Polidori, a physician and friend of Lord Byron. Polidori’s vampire, Lord Ruthven, was a handsome, enigmatic nobleman with dead gray eyes and a face of deathly hue. Despite a somewhat dangerous quality about him, Ruthven, with his winning tongue, was extremely attractive to the opposite sex, whether the women were virtuous or of ill repute. London’s high society welcomed him, for it was pleased to have in its ranks one who could hold the bored aristocracy’s attention. Ruthven’s evil nature was spelled out as the story unfolded by his destruction of several women, including his friend Aubrey’s love interest, Ianthe, and Aubrey’s sister, who Ruthven married and killed on their wedding night.

Not until Bram Stoker published Dracula in 1897, however, did the fictional vampire become entrenched in modern literature. Stoker’s Count Dracula, a centuries old former military leader who lived in a castle deep in Transylvania’s Carpathian Mountains, sent the standard for the evil aristocratic vampire. The tall, black-clad man, with receding hair line, ruddy full lips and ice cold hands, sent shivers down the spine of every Victorian reader from the moment he was created and continues to fascinate and repulse modern readers. His seduction and destruction of Lucy has been told and re-told in various guises by multiple authors.

In 1740, Samuel Richardson’s Pamela, the first romance novel, was published, unique in that it focused on a couple’s courtship as told from the female protagonist’s perspective. Jane Austen expanded the genre in the 1800s with books like Pride and Prejudice, Emma and Sense and Sensibility, whose plots revolved around courtship and marriage and strong-minded heroines; Georgette Heyer, in the 1920s, continued the genre’s development with her historical romances set in Regency England. However, modern romance novels as we know them today had their inception in 1972 with the publication of Kathleen Woodwiss’ The Flame and The Flower, a story that depicts the trials and travails of Heather and Brandon Birmingham as they travel the path to true love. Woodwiss’ book, the first to be published only in paperback, was also the first to depict sexual intimacy between its protagonists.

Since then, many forms of romance novels have been written, all following the same basic formula. In a true romance novel, the plot must revolve around the course of love between a male and female protagonist as they work through various complications and conflicts. In such novels, there must always be a happy ending, when good characters are rewarded and bad ones punished. Plotlines must be simple and straightforward, and have few, if any subplots. Ultimately, these novels must be about the celebration of love and commitment, and seek to leave the reader emotionally satisfied.

Male protagonists in romance novels have also taken various forms. Bad boys, good boys, policemen, cowboys, rock stars, actors, thieves, lawyers, scientists, all have featured as romantic heroes, and quite successfully. Romance novels are best sellers, with a huge market for woman of all educational and economic levels. Woman read romances as an antidote for stress, to escape from reality, and to learn about new places and new careers. To these women, a strong male lead is an integral part of the entire experience.

Enter the vampire. Mysterious and magical, time travelers, shape shifters and master hypnotists, these creatures of the night are depicted as strong, handsome, seductive, sexually aggressive males. They are immortal supernatural beings with a huge flaw, the lust for human blood, which must be overcome out of love for the heroine, making them hugely sympathetic to the reader. Vampires in and of themselves present the conflict so necessary to the optimistic resolution of the contemporary romance novel and in fact, are the epitome of the romantic hero. It is no wonder that these novels have a huge fan base.

Although I have enjoyed a vampire romance or two, the same cannot be said of my daughter. Caity has, she proudly says, read only one and a half of the Twilight books. Peering up at me over the edge of the book she is currently reading, Stephen King’s Salem’s Lot, she tells me the reason why. “I like my vampires evil.”