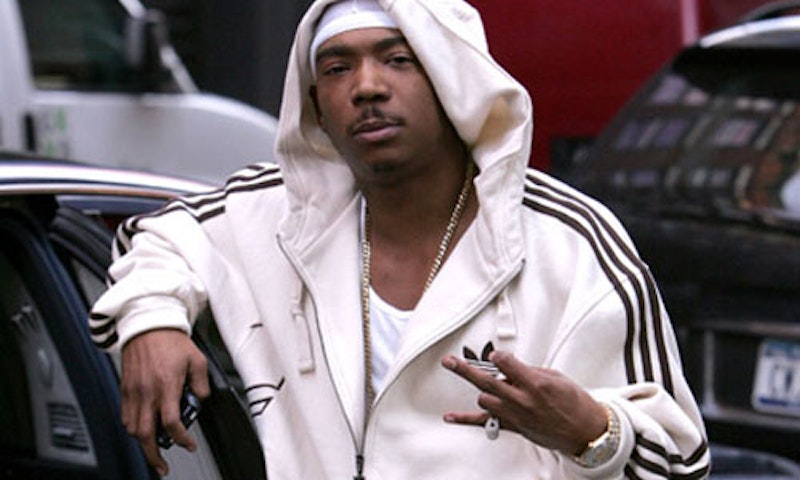 Ja Rule's bench-press game earned him five mikes in a penitentiary-themed 2012 edition of The Source.

Ja Rule has a recurring dream that is unlike anything he's experienced in his waking life. He finds himself in a lavishly appointed Buddhist temple in the Eastern Himalayas with two other men: a mellow Jamaican Rastafarian and a taciturn German national. An ornamental hookah is passed between the three, in silence. There are floor-to-ceiling windows that offer breathtaking views of mountain ranges and low hanging clouds. Incense stings everyone's eyes. In the dream, this day somehow stretches on for weeks, even months. Ja Rule finds it difficult to move, and he does not care to imagine what he would see staring back at him if those windows were mirrors. Presently, the Rastafarian turns to the others, bewildered, as if to approach speech, and Ja Rule begs and pleads with a God he knows is not listening that the first word to come out is anything other than "Jah." Anything else. Please.

In late 2006, an enterprising Senegalese wholesaler quickly sold out of a 5000-copy run of an un-labeled lathe cut which featured 45 minutes of an unbilled Ja Rule purring like a cat, while actual cats purr in the background. Though Ja Rule and his management have never confirmed, denied, or in any way acknowledged this item or the cult that has emerged to embrace it, the record has achieved fetish-item status in Cannes, Tokyo, and certain parts of Bed-Stuy, where it is revered as an aphrodisiac.

Sometimes when she can't sleep, Jennifer Lopez circles lower Manhattan in the backseat of a Lincoln Town Car, sipping champagne, listening to the "I'm Real" remix on repeat, balling her right hand into a fist so tight that her manicured fingernails draw blood from her palm.

The screw is wise. He throws Ja Rule a nod at the appointed hour. Holding his gaze, Ja Rule slips on a pair of Stunner shades, applies some activator. Then he returns the nod.