All Those Pretty, Funny Things

The celebrated comic strip "Pearls Before Swine" turned 10 last year, will it make it to 20? 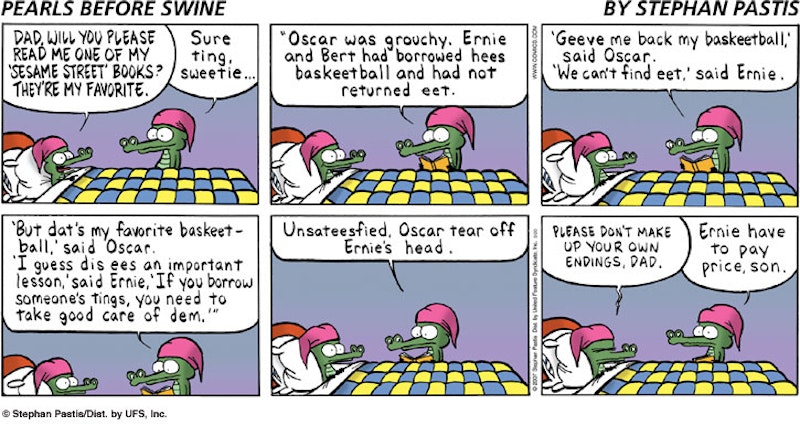 “Pearls Before Swine” is a very popular comic strip that appears in several hundred newspapers worldwide. Twice in the strip's first decade, creator Stephan Pastis won the National Cartoonists Society's Best Newspaper Comic Strip award. Publisher Andrews McMeel releases a new "treasury" biannually, collecting approximately two years of the strip. The fifth and splashiest of these, Pearls Blows Up, appeared last year to mark the comic's big one-oh. The animation company RingTales has worked with Pastis to produce dozens of animated shorts and a more extended cartoon treatment may be in the offing. “Pearls” has a plush toy line, which the strip both mocks and plugs regularly.

Even given the strip's current success, it is worth asking: Is it likely to last another 10 years? “Pearls” is a great comic strip, perhaps the best published today if we agree with the judgment of the National Cartoonists Society. (And I do.) Yet popular new comic strips often fall victim to creative burnout. “Calvin and Hobbes” creator Bill Watterson lasted all of 10 years with two long sabbaticals thrown in. “The Boondocks” creator Aaron McGruder struggled to make it that long, even with art assistance, as television projects spread his time too thin. “The Far Side” creator Gary Larson made it to 15 and then retired. Many of the comic strips appearing in newspapers today have lasted a long time. Yet often that is because they've been farmed out to other writers and artists to continue the franchise.

The more personal the strip, the less possible it becomes to farm it out or adapt to other media. Watterson was so attached to his own creation that he wouldn't allow “Calvin and Hobbes” merchandise. (The peeing Calvin that you sometimes see on decals is counterfeited.) Larsen's insights and sense of humor were so unique that it was impossible to imagine anyone else doing “The Far Side.” McGruder insisted that the art assistance didn't help him that much because he still fussed over every panel. Pastis' comic doesn’t face these obstacles exactly, but there is another problem. “Pearls” doesn't just break the fourth wall separating the fictional world of the characters and the real world of readers. It proceeds as if that barrier never existed. Thus, Pastis appears frequently as a character in his own strip. The cover of Pearls Blows Up features an explosion caused by Zebra's cute but deadly kitty Snuffles as the Guard Duck narrowly fails to stop it. The strip's main characters fly from the center of the blast. We have a wide-eyed Pig; a stunned, angry Rat; a shocked Goat; one of the Crocs; and others. Pastis—not just a cartoon rendering of him but the man himself, looking worse for the boom—is front and center, flying at us.

Pastis is regularly insulted and attacked by Rat for his bad, elaborate puns. A recent strip not collected here had Rat retaliating for a particularly bad mafia pun by fitting him with cement shoes. In "Pearls Blows Up," in what may be a first for a comic creator, Pastis dies in his own strip. He is resurrected when the president of United Feature Syndicate, his distributor, appears as a floating head in heaven and objects that this is no way to sell to newspapers. It is a way to sell this comic strip, though. Death is one of the things that distinguishes “Pearls” from most other comic strips. The Crocs frequently die through their own stupidity. Zebra's relatives meet similar fates. Zebra personally has to come up with ways to avoid countless predators, including the ferocious wives of the docile male lions next door. In one of my favorite individual strips, Zebra, napping on a deck chair, opens his eyes to see a pair of his neighbor hyenas with forks and knives. "There's a difference between asleep and dead, guys," he tells the scavengers. "Sorry," says one hyena. "Tough to tell sometimes," mutters the other.

Some of the highlights collected in Pearls Blows Up are the sad escape of Andy the still-impossibly chained dog's girlfriend Olive; the pro-terrorist geopolitical shenanigans of Snuffles that land Zebra in jail; Pig's turn as a goth who listens to Hannah Montana; Rat's high "Chair O' Great Authority," from which he chuck bricks at people who annoy him; Guard Duck's forced apology to Hugo Chavez for declaring war on Venezuela; and the same duck's heartbreak when his girlfriend Maura dumps him to pursue a career advertising car insurance. About the duck breakup, Pastis comments, "If I can say this without seeming like an enormous ass, I'm very proud of the writing in this strip." Past treasuries have featured comments by him but in Pearls Blows Up, he really takes to it. His comments are a mix of a Statler and Waldorf routine, a struggling stylist taking notes for the future, and a grizzled comics veteran telling us old stories.

The other thing that is better in this volume than in previous collections is the full color, full-page Sunday strips. Some comic strip veterans focus more energy on the Sunday strips as the strip ages. Bill Watterson's focus on Sunday helped “Calvin and Hobbes” to last 10 years. On days of rest, Pastis has wisely chosen to tell Danny Donkey stories more often. Danny Donkey stories are children's stories written by Rat whose messages are deemed unsuitable for minors. "You are not putting that in a kids' book, Rat!" an annoyed Goat nearly always objects. Well, no, but Pastis is putting it within easy reach of the children on the funnies page. Half the fun of “Pearls” is seeing all that the artist manages to get away with in what is still a highly censored medium. We cannot know for sure that “Pearls” will make it to the 20 year mark, but Pastis shows no signs of flagging.