The end of spontaneity on TV. 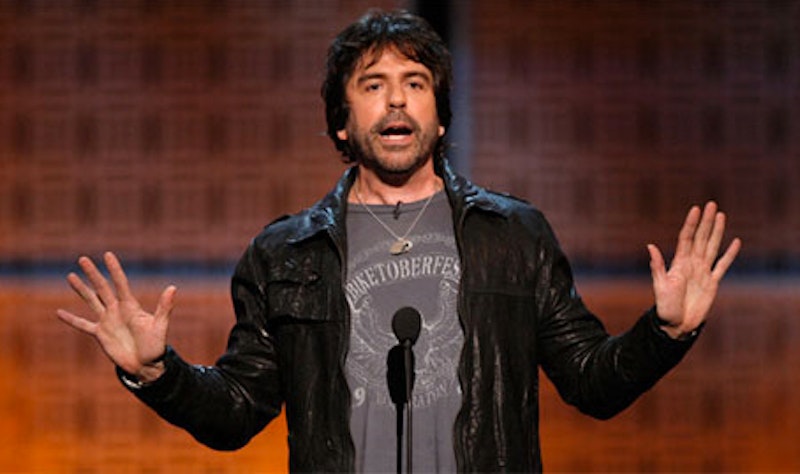 One of television's greatest qualities used to be its spontaneity. If you go back to the era of The Dick Cavett Show, you'll find a treasure trove of riveting impromptu moments. Cavett would put a disparate group of talent like Raquel Welch, Douglas Fairbanks Jr., Chet Huntley and Janis Joplin together on the set and just let them talk. On one memorable show Cavett put literary archrivals Gore Vidal and Norman Mailer on together and, predictably, sparks did fly. Mailer, who had stoked himself on booze before the show, set the tone early by head-butting Vidal in the green room. Gore had recently compared him to Charlie Manson and Mailer, who had previously stabbed his wife, wasn't digging that one bit.

In front of the live audience, events proceeded as one would expect. The two went at each other's throats and when Cavett got involved, Mailer turned on him as well. Near the conclusion of the dust-up, Cavett asked Mailer to clarify a point, and the combative author responded dismissively, "Why don't you look at your question sheet and ask your question?" Cavett was momentarily stunned, but came back quickly with, "Why don't you fold it five ways and put it where the moon don't shine?" It was a mic drop moment, and Mailer—the pugilist—knew he'd taken a hard right to the chin. The audience affirmed this by erupting in enthusiastic, extended applause. The fight was over.

Literary feuds are fun to follow. Two comedians squaring off against each other can also be highly entertaining, as humor—a talent Mailer did not possess—can cut like a knife, just as Cavett demonstrated. I’d imagine that the place to witness such comic altercations is in the later hours at comedy clubs, after a few drinks have been knocked back and old grudges or rivalries get addressed. Sadly, we generally don't get to view them on TV because comedians are rarely paired in a televised situation where they can just be themselves. By my reckoning, you'd have to go back to 2003 for the last great TV comic street fight, when the late, great comedian Greg Giraldo gave to his comic colleague Denis Leary what Norman Mailer got on the Dick Cavett set in 1971.

The venue for this smackdown was the TV program Tough Crowd, which was a kind of Crossfire for comedians. Colin Quinn served as a roundtable host for a discussion of current topics to a core panel of comedians (there was some variation in the lineup) appearing regularly on the show. This was comedy in its most raw and unfiltered form, and at its best it walked the fine line of controlled chaos, much like an improv jazz quartet pushing the harmonic envelope.

Denis Leary was pretty much a household name at that point, but Giraldo—who died in 2010 at 44 from an accidental drug overdose—never really got above B-list status, although not for lack of talent. The moniker of "comedian's comedian" was bestowed on Giraldo, a nod to the fact that his commercial success never quite matched the reverence in which he was held in comic circles. Leary, on his fateful day, was spoiling for a fight, and his sneering wiseass comic persona was on full display. Giraldo, a Harvard-trained lawyer with a nearly perfect LSAT score, started to tell a joke about North Korea's bellicose military stance against the US. Here's the exchange:

Leary: There’s a non-violent way to solve the problem with a country that we hate, that hates us, that’s got weapons pointed at us? I don’t think so.

Giraldo: No, you’re right, like Russia, for example. That big Russian war.

Ouch, no comeback. Giraldo's effortless retort had to hurt, and it showed on Leary's face. The Boston comic was probably feeling like Sonny Liston after the young Cassius Clay connected with that first hard left-right combo in the first round of their initial fight in 1964. Leary regrouped and attacked:

Leary: This guy writes so many jokes before the show, it’s not even funny. It’s unbelievable. He’s got a pocketful of them.

Quinn: They’re good ones, though.

Giraldo: That’s kind of what we do here, Denis. I’m a comedy writer.

Leary: You’re the guy in school that did all the homework and then asked if there was any more that needed to be done.

Giraldo: That’s a good point. And if you had tried a little comedy writing, maybe your show would still be on the air.

Giraldo was beating Leary like a rented mule now, and then the coup de grace:

The fight was over and Leary knew it. Quinn, acting as the referee, put his leg up on the table separating them, as it appeared that the two combatants might use their fists next. Leary made a token effort to continue but Quinn put him out of his misery by mercifully ending the show. Like Sonny Liston, who also got knocked out against the future Mohammad Ali, he had not trained sufficiently for this fight.

Only on TV can—or more accurately, could—you witness such pyrotechnics. Quinn just stood aside and let them throw their punches, which you'll never see anywhere else on TV. This was great, spontaneous television and I watch the clip all the time. It's a relic of the past though, as network execs all have the MBA mentality now. They say they want "edgy," but it's lip service because they’re scared to death of making people uncomfortable. Jon Stewart is edgy to the new breed of network honcho, but he stays inside the politically correct lines and doesn't offend his audience. Stewart is "safe edgy" because he's considered trustworthy, but Colin Quinn wouldn't play the game. Network producers want certain topics—race, in particular, scares them—to be out of bounds, but the Tough Crowd bunch couldn't be reined in because they knew comedy is about the freedom to say what you want. Let people get offended if they choose to. Their brand of raw comedy was cathartic and it produced real, unexamined laughs as well as brilliant moments. Comedy Central killed it though. They never promoted the show, and pulled the plug as soon as they could. Tough Crowd can now only be found on YouTube. It's in the rearview mirror, just like all the other good stuff.