Give Me Something to Burn

Woodstock '99 organizers Michael Lang and John Scher did themselves no favors by appearing in Trainwreck, a new documentary about the disastrous festival. 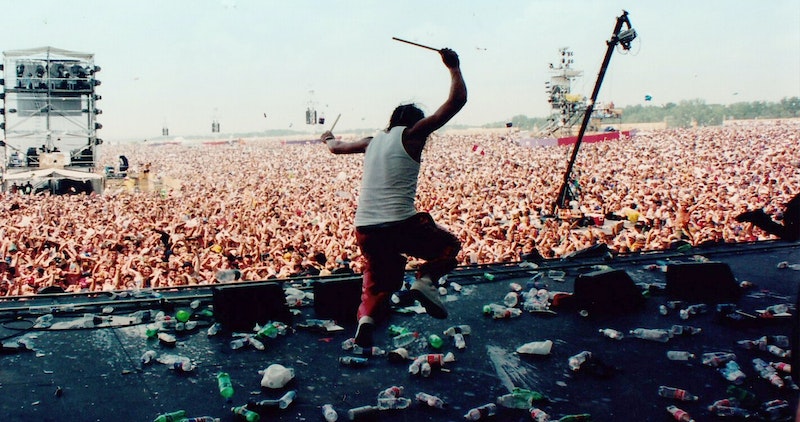 The new Netflix documentary series/disaster film, Trainwreck: Woodstock '99, benefits from the participation of the two principal organizers of that ill-fated music festival that was supposed to be three days of fun, drugs, and unity. Michael Lang and John Scher did themselves no favors by appearing in the film, as snippets from their interviews are interspersed between scenes and accounts of violence, sexual assault, crippling summer heat, overflowing toilets, looting, and arson.

The promoters try to put a positive spin on their many failures. A Scher quote sums up their gaslighting approach: "We were having fun. We had worked a year to plan this, and it was working. Yes, issues existed, but they were isolated. Nobody came thinking they were going to stay at the Ritz Carlton." He's trying to suggest that the main problem was that the festivalgoers had less than luxurious accommodations, but this film belies that disingenuous assertion in almost every frame. By Sunday, public health inspector Joe Patterson said all the drinking water samples were contaminated.

Lang and Scher probably agreed to participate in this three-part series hoping they could salvage their reputations, but all roads lead back to that duo in the post-mortem investigation of the disaster that took place at the decommissioned Griffiss Air Force Base in Rome, New York—about 100 miles away from the original site on Max Yeager's farm—with 400,000 people in attendance. Griffiss had none of the green, rolling hills of the original Woodstock. Nothing about it was suggestive of it being a great venue for a music festival. Instead of grassy fields, it had tarmac roads and asphalt which exacerbated the heat wave in upstate New York. And festivalgoers had to walk over a mile on those roads to go from one major stage to the other. There was so little grass on the base that many ended up camping on asphalt.

Early on, this film gives viewers a taste of how poorly the event was organized with archival footage of security people taking away all food and drink—even bottled water—from those entering the grounds. Bottled water was going for $4 a pop on the first day, up to $8 by the end. As a result, more than 700 people were treated for heat exhaustion and dehydration over the weekend, with a total of over 1200 onsite medical admissions. Eight-dollar water produces high profit margins, but Lang and Scher neglected to account for the anger level that three days in 100° heat can produce. The tap water they'd made available had a brackish color, and there were reports of people contracting trench mouth.

Director Jamie Crawford begins with footage filmed from a car driving around what appears to be a war zone on the day after the festival ended. "What is this, fucking Bosnia," says the driver, a journalist who covered the event. There's refuse covering the ground, smoldering fires, and incinerated vehicles, including eight trailers. It looked like the beginning of a post-apocalypse film rather than the scene of a music festival associated with positive vibrations. The gentle, peace-and-love hippie spirit was lost somewhere along the way. It was lost by the time some guys stole a van and drove it through the crowd during Fatboy Slim's set, causing him to get on his bus and flee the festival. Trainwreck reports that when the van was stopped, there was a young teenage girl passed out in the front seat with her pants down and a guy in the back struggling to get his pants on quickly.

Listing all of the factors that led up to the riot on the final night is a time-consuming task. As Jamie Crawford put it: "There was just such a wealth of story and material. It's not a simple narrative. There is no one single version of this story. It's like one of those giant medieval paintings where they are in their sort of myriad of vignettes that are happening at the same time and you need to try and tie all those together into something that represents the whole."

However you tie it all together, it looks ugly. Following the money is the best approach to pinpointing the origins of Woodstock 1999's many failures. Money is why the organizers chose that awful military location, because they wanted to make sure that the kids couldn't break the fences down and get in free like they did at the 1969 music festival. Ironically, the kids would eventually break those fences in Rome down from the inside so they could escape the mayhem within. The organizers could’ve spent more on toilets so they wouldn't overflow and mix with the mud that people rolled around in. They could’ve shelled out for professional security instead of the ragtag "Peace Patrol" they hired. They could’ve paid to provide fresh, unpolluted drinking water, but they didn't. It's galling that Lang and Scher don’t own up to any of this in the film. Lang, who died just months after Trainwreck was completed, had one final chance for atonement, but he passed.

Idiot frat-boy types at Woodstock '99 were yelling at Sheryl Crow, "Show us your tits." Crowd-surfing women were groped. Trailers full of merchandise and equipment were burglarized, and abandoned vendor booths were turned over and set on fire. ATMs were smashed apart and looted. MTV host Kurt Loder, who witnessed the chaos in person said, "It was dangerous to be around. The whole scene was scary. There were just waves of hatred bouncing around the place." Eyewitnesses reported one crowd-surfing woman pulled down into the crowd and gang-raped in the mosh pit during Limp Bizkit's set. A volunteer also reported seeing a gang-rape during the Korn performance. At least five rapes and numerous other sexual assaults and harassment were reported to authorities. Three people died.

Jamie Crawford presents Woodstock '99 as the product of greed, naivete, ego, and poor judgment. On the final evening, when the tension and coiled-aggression was building towards a crescendo, the organizers passed 10,000 candles out for a candlelight vigil against gun violence. When the Red Hot Chili Peppers' lead singer Anthony Kiedis noticed the fires that started in the audience, he remarked on their beauty, as if he were watching a movie. For their encore performance, the band covered Jimi Hendrix's "Fire" as more fires emerged in the crowd.

Perhaps the festival organizers should’ve invited fewer angry-white-boy bands to perform, as the love vibe of the 1960s had been replaced by something much less peaceful by the end of the 1990s. Before performing "Break Stuff" on the final evening, at a time when things needed to cool down, Limp Bizkit frontman Fred Durst encouraged the crowd to do exactly that, and that's what they did. Unsurprisingly, it led to the NY State Police being called in in riot gear to disperse the unruly, dangerous crowd.

John Scher and Michael Lang never accepted any responsibility for the failures of the festival over the years, and they continue that denial throughout this film. While what Kiedis and Durst did was reprehensible, it was the promoters who'd set the stage for all the mayhem. Trainwreck documents their irresponsible management of the long weekend every step of the way. That duo has ensured that there will never be another Woodstock.