Is Irish Spring Even Irish?

United Press International reported in June of 1987 that certain sectors of Ireland’s population were “irked” by the fact that Irish Spring was imported to Ireland. 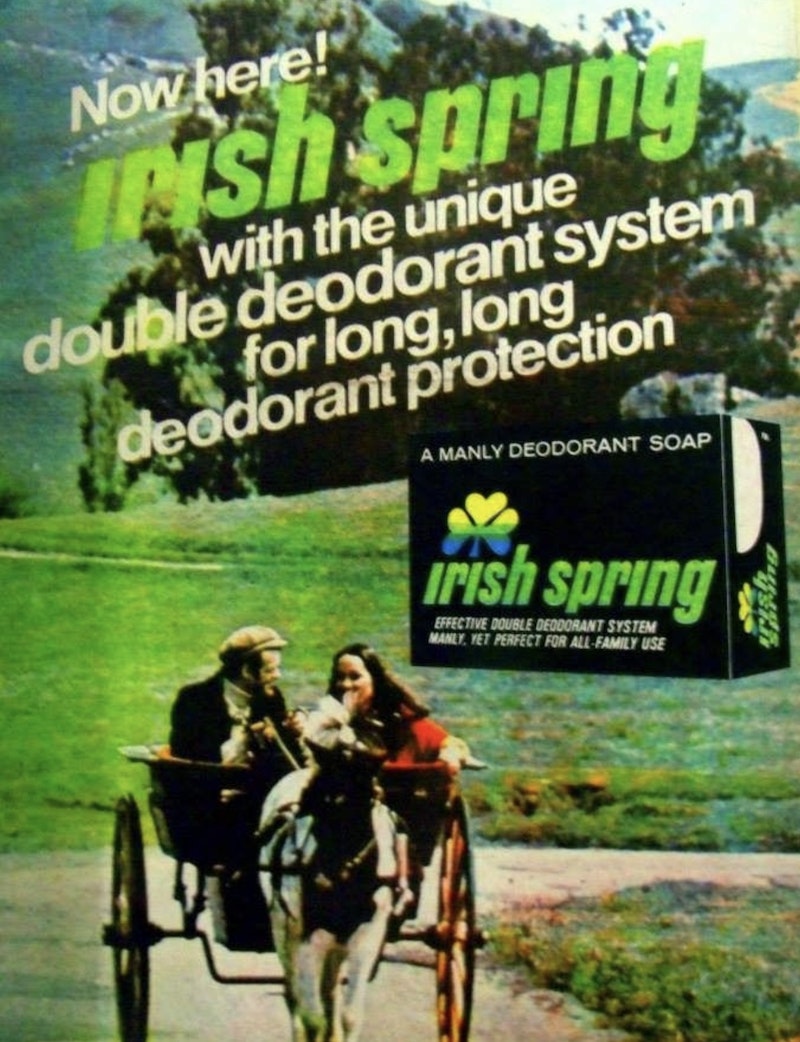 When Irish Spring soap made its debut in the early-1970s, it was unmistakably marketed as a deodorant soap for men. Even while making use of the catchphrase “A manly deodorant soap,” this market newcomer was simultaneously advertised as possessing a fragrance that even the women of the household wouldn’t mind emanating from their bodies. The Colgate-Palmolive brand quickly swung for the fences by shipping out 20 million sample bars, and spending an estimated $10 million on advertising, which was at least double what most of the established brands in the soap industry were spending at that time. All of this was in the hopes of capturing market share from the dominant giants of the soap industry: Ivory, Dial, Zest and Safeguard.

An advertorial from December of 1971 listed the six reasons why consumers should give the new Irish Spring soap bar a chance:

1. Irish Spring is the first deodorant soap to boast “a double deodorant system.”

2. Irish Spring has a fragrance that’s “as fresh as a spring day in Ireland.”

4. Irish Spring is the first bar to show off green and white stripes that showcase its “double deodorant system.”

6. Irish Spring advertising “captures all the charm of Ireland.”

What was so Irish and charming about the advertising? It featured handsome, clean-shaven men either performing strenuous manual labor against the backdrop of a green countryside, or engaged in assorted sports that may or may not have involved farm animals. From there, a thickly-accented gentleman attired in a turtleneck, sport coat and tamoshanter would approach them, produce a pocket knife, and whittle away at a bar of Irish Spring to reveal the dual striping of its double deodorant system.

The always hairy-chested men would then lather themselves up in a brightly-lit shower while gushing about the soap’s unique form of freshness before an equally Irish woman emerged to insist that she enjoyed the soap and its scent as well.

And what exactly did this soap that captured the essence of Ireland smell like? In multiple publications, including the first George Lazarus report from The Chicago Tribune that remarked on the rousing first-year success of Irish Spring in September of 1972, Irish Spring was described as possessing a “pine fragrance.” Subsequent reports would suggest that the soap’s unique scent most closely resembled that of a Fraser fir, a tree native to very specific parts of the Great Smoky Mountains of the Appalachian region of the United States. Moreover, that particular tree was named after Scottish botanist John Fraser.

As far as the success of the brand, Lazarus reported that Irish Spring had rapidly risen to capture five percent of the soap industry’s market share in its first five months in the marketplace. “The folks and Procter & Gamble are a little bit nervous,” an unnamed industry executive remarked to Lazarus. “They’re not used to Colgate coming into the soap trade with such impact for a new brand.” While Irish Spring was still positioned well behind Ivory, Dial and Zest, which collectively owned 47 percent of the soap market, Irish Spring’s tactful snatching of 1/20th of the soap market in such a short time frame was jarring.

What exactly made Irish Spring so Irish? You saw all of the allusions to the freshness of a spring day in Ireland? They must have been using “fresh” as shorthand for “cold and rainy”; most regions of Ireland average 200 days of rainfall each year, and the temperature usually remains between 45 and 55°F. The green of Irish Spring is an obvious appeal to Irish culture, as are the clovers used in much of the soap’s branding. That’s essentially as Irish as this cultural appropriator of a soap brand gets.

Irish Spring’s claim to Irish authenticity is about as legitimate as the thick Irish accent used by Martin Kove—recognized by most film fans as evil sensei John Kreese of Karate Kid and Cobra Kai fame—during his feature appearance in an Irish Spring commercial from the 1970s. I reckon you’ll be sweepin’ the leg, aye laddie?

The marketing experts of Colgate-Palmolive may have identified that roughly one in five American claimed Irish ancestry in the 1970s—a figure that has now fallen to one in 10—and appealing to that demographic might be a swift way to appeal to a sizable consumer segment. However, there was never anything inherently Irish about Irish Spring. Hilariously, United Press International reported in June of 1987 that certain sectors of Ireland’s population were “irked” by the fact that Irish Spring was imported to Ireland—alongside 2000 tons of other soap products—but was not manufactured there. In response, Peggy Connolly of Cork gained government backing from the Irish government’s Women in Business Enterprise Program and declared her intent to manufacture and sell “Irish Breeze” in both Ireland and the United States in order to compete with Irish Spring. Unfortunately for Connolly, that was the first and last time anyone stateside ever heard of Irish Breeze.

Ultimately, Irish Spring did climb to capture as much as 15 percent of the soap market, proving that sometimes the luck of the Irish is kind enough to follow anyone who claims it, just as long as your soap is the appropriate shade of green, and your brogue is as thick as your soap’s pine-scented lather.