Huge in France isn’t the showcase for Gad Elmaleh. 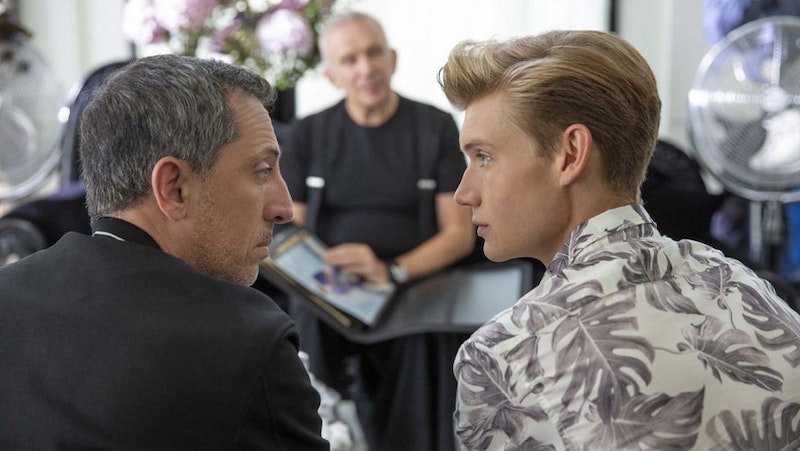 “Look,” a man says to a boy. There follows a sputtering, gulping sound as the man furiously runs mouth and tongue over a lump of clear plastic. “Motorboat,” the man says. The lump is there because it’s going to go in the boy’s arm. The kid wants to model, so he’s getting a pec implant. That’s what the man put his mouth on.

The scene’s from Huge in France, a Netflix comedy about L.A. and show biz. Gad Elmaleh, a comedian who’s indeed huge in France, has come to America, where he’s nobody. The series follows him as he scuffles about the gray streets of an overcast California, and Elmaleh is gray and overcast too. Cut off from his language and his fame, looking like meat that’s been under the heat lamp, he’s a narrow strip of an aging man. This is pretty much how the show wants us to see him. The TV show’s Gad has hit a dead end in life; his spirit has shut down. He figures he’ll snap out of it if he finds the son he ditched so many years ago, the child he had with a blonde American woman.

This child is the boy (Jordan Ver Hoeve) contemplating the pec implant. Half the money for the implant is supposed to come from the motorboating man (Matthew Del Negro), who’s the boyfriend of the boy’s mother. Gad’s self-assigned mission is to get between, so to speak, the boy and the man. Gad wants to be the father, and he wants it even if the other man has put in the time. This situation gives Huge a case of tied shoelaces. To take a rooting interest in the show’s characters, one must pass up the star. The other fellow has his self-respect at stake. The poor sap has no money and no career and lives off the kid’s mother. If he isn’t the boy’s idol and role model, he’s nothing. Or, to be more precise, he’s something like a house pet.

No wonder we see him scrambling for that kid’s pec money. We see him make the hard choices (what he puts up with at the sperm bank), and we see him strive to get something going, by which I mean that dumb kid’s modeling career and the chance that the two can love each other (chastely, as father and son). Meanwhile, Gad floats about, getting in the way. He’s the guy who screws up the protagonist’s plans. He doesn’t even mean to do it. He stumbles into doing so—forgetting the email about the mousse! He’s human clutter, and that’s the foreground of Huge in France.

For a man playing a plot back hole and doing so in a foreign language, Gad Elmaleh is very adequate. Matthew Del Negro is fine as the trapped hunk of manness orbiting Gad’s ex; so is Erinn Hayes as the ex, a much narrower part. The beautiful Jordan Ver Hoeve gets by as the kid. Scott Keiji Takeda does very nice work as Gad’s numbnuts assistant; his quiet, adroit performance undergirds many minutes of footage centered on a performer coping with English as a second language.

In the meantime, mom’s boyfriend motorboats the sleek plastic lump that’s going in the beautiful boy’s arm. Masculinity gets some assiduous undermining in Huge. Gad or his collaborators, the producer team of Andrew Mogel and Jarrad Paul, may feel that masculinity has been broken down and sold for parts in America. The same for family and, let’s get big, identity. The components are piled up and kicked around on shows like Huge and the reviewers don’t even notice. Parts on the floor is what America’s all about these days. Huge in France does provide a decent black comedy about a desperate man in L.A. and what he must do to feel like he has a family and a role. But you have to look past the French guy ambling about with his malaise.