You can be vegan and wear Doc Martens, even if you hate cows (like me). 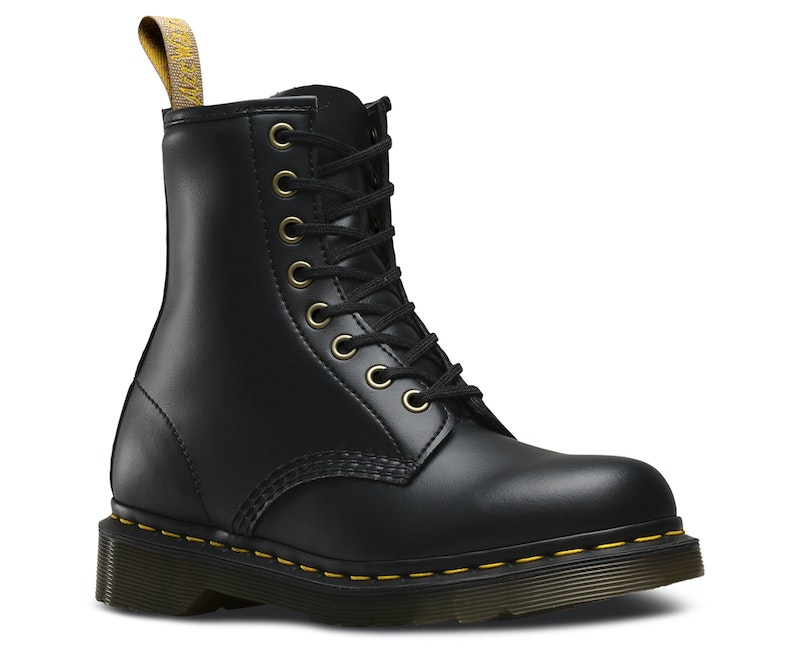 The other day I thought I should fuck around and get some vegan boots, or at least spurs. I wanna be the cowboy, like Mitski. Her music is good, but there isn’t very much shooting or chewing tobacco to be found in it. So, false advertising much? I suppose nothing is sacred in today’s America… Potbelly is woke, Denny’s is depressed, and Chipotle can’t catch a break.

All the brands are falling—except Doc Martens. Ah, Doc Martens. A fantastic company, the greatest: they make shoes. Of course, as a bird of flightless persuasion, I require footwear for long walks and sojourns. Being a marginalized and endangered species, I must support only the most ethical companies. By most ethical, I mean they fuck up lots of cows. I like that. For one, I’m not a cow, so the issue doesn’t affect me. Two, I’m a child of the 1990s (at least in spirit), and always like clothing that makes me appear taller and more majestic. Three, I like to kick (in the general and the specific). This company helps me achieve these goals.

I used to be in a band. Yeah, no big deal… we were pretty popular though. We were on Sub Pop for a hot second, but then they went “bankrupt” and dropped us right before our 7” was supposed to come out. We were called the Bootstraps and we were a Republican hardcore band. This is the late 1980s, pre-Nevermind, but even then all their attention went to that fucking blond Muppet’s band. God, Nirvana was so terrible. Talk about the opposite of poetry. I’d rather read Rupi Kaur for the rest of my life than ever hear another song by Kurt “my tummy hurts” Cobain. What a little bitch. No wonder a strong, confident, powerful woman like Courtney Love was able to manipulate and control him to her liking. No, I don’t believe in the murder theory, but I do know that she has terrible taste in men. Billy Corgan? More like fat bald asshole... heh.

But they’re all dead now so I can talk. I like my boots hard and stiff, much like my hackle. Maybe one day I’ll be inducted into the Rock ‘n’ Roll Hall of Fame. I guess I have to suck off Jann again, oh well… not the worst price to pay for eternal glory and free tickets to Cleveland (very cool city). But I want to be remembered as a solo artist, not as anyone’s partner or second banana. Feel like maybe I should ditch my cousin and his whore wife, but I’m dependent on them in virtually every way. Do you know that I have to get permission to write for this website? It’s true… one day I’ll start my own. I think I’ll call it Cock-dot-com… heh. It’s funny. Just know this: you can be vegan and hate cows. You can even be vegan and hate “chickens,” but I don’t recommend it… you’ll have to look over your shoulder for the rest of your life. I’ll come for you, and I’ll take your scalp as a souvenir. Maybe they’ll be displayed in a museum alongside my skeleton. I will NEVER be taxidermied… if that happens, please cause chaos on my behalf. Thank you, brothers and sisters. Time to go buy some leather.