One day a year dedicated to the Earth isn't nearly enough, especially when magazines like Vanity Fair continue their glaring eco-hypocrisy. 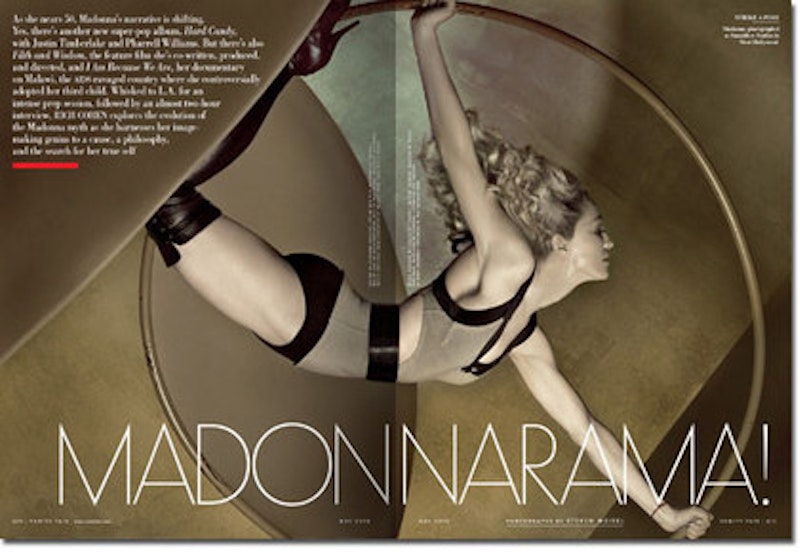 The "green" issue of Vanity Fair, above, coincided with Earth day, and their cover interview with Madonna contained no references to the environment.

Another Earth Day has come and gone and I hardly even noticed. It was nice outside, sunny and warm and that seemed fitting, but other than that I just sat in my office going about the daily routine. It's not that I don't care about the environment. I always recycle whenever possible and encourage others to do the same. My lunch is packed in resuable containers. I make good use of public transportation or walk nearly everywhere I go. The environment is one of those hot-button issues for me come election time, right up there with abortion and gay rights. But I still essentially ignored Earth Day, and I still never remember to turn off the faucet while I'm brushing my teeth or cut back on my shower time to conserve water.

The truth is Earth Day perfectly epitomizes everything that is wrong with the American approach to environmental issues. Not to suggest that it is in any way negative or pointless. When it began in 1970, Earth Day was instrumental in bringing environmentalism to the attention of the American media. It helped significantly raise awareness about the American environmental movement and brought national focus to issues of pollution reduction and energy conservation. In the 1990s, Earth Day helped promote nationwide recycling efforts. But this is not 1970, when the average American was in the dark about these concerns. Global warming and deforestation are common knowledge. Concerns about pollution are as pervasive as the smog that hangs over Los Angeles and Houston. Americans shouldn't need a designated day to remind us that we need to be more socially conscious, a day in which we feel compelled to do something good for the environment.

Earth Day is like a quick fix, a minimalist approach to environmental activism. Yay! We spent a whole day celebrating the Earth! Now let's pat ourselves on the back and close the book on that task for the year. Certainly there are people-millions even, if you look at the day's event attendance-who put significant time and effort into making the most of Earth Day. But in doing so, they're letting the rest of us off the hook, content to know that something has been done without having to do it ourselves. Improving the environment is not a one-day task, though. It requires the type of attention and focus that Americans are not willing to give or think they're responsible for. We applaud ourselves for tossing plastic water bottles in a recycling bin instead of a trash can, but really it's the very least we can do. And we say that we care about reducing emissions, but we still each prefer to drive a car everywhere we go, rather than stand around and wait for a bus. We like to tell ourselves that we're doing all we can, but our actions are nowhere near as loud as our words.

Take for instance, the newest issue of Vanity Fair. The cover of its third annual "green" issue shows Madonna grasping a giant globe like a sexy version of Atlas and touts environmentally focused articles like "China's Plan to Control the Weather" and "Selling Out Polar Bears." While it's certainly admirable of the magazine to promote environmental awareness with well-written, thought-provoking critiques (and I'm even willing to ignore the fact that the Madonna interview had no mention of the environment at all), Vanity Fair has yet again failed to put its money where its mouth is by neglecting to print the "green" issue on recycled paper. It's not enough to simply tell readers that they should be more conscious of the environment; Vanity Fair should lead by example. With the increasingly reasonable cost of bulk-recycled paper, there is no excuse for a "green" issue to be printed on anything else. And for that matter, I see no convincing argument for why this and other magazines cannot print every issue on recycled paper. Condé Nast reports Vanity Fair's 2007 average paid circulation as 1,153,517-that's a lot of trees that could have easily been saved.

The problem is that indignation is an accepted replacement for real action. If Vanity Fair appears outraged enough at others for doing nothing to help the environment, it somehow gives them a free pass for not doing anything either. The best example of this can be seen in the reception of An Inconvenient Truth, the documentary detailing Al Gore's campaign for global warming awareness. Despite premiering in an extremely limited capacity, the film went on to gross nearly $50 million at the box office and is the fourth-highest-grossing documentary to date. The popular film became a mouthpiece for every mildly environmentally minded college student in America. I remember walking to class one day with a friend after he'd seen the movie. He was so outraged, so incredibly moved. The film had really opened his eyes, he claimed ecstatically. Then he unwrapped a piece of gum, stuck it in his mouth, and dropped the wrapper on the ground. Maybe he was just a jerk, but none of the people I knew who loved that film suddenly decided to pursue an Environmental Studies major, or just couldn't resist the urge to go outside and plant a tree.

Major events and organizations that raise money and awareness for environmental issues are undeniably integral to improving the condition of our world. That's why Earth Day, despite lasting a mere 24 hours, remains a worthwhile endeavor after all these years. But in reality, helping the environment is really about all the little things; the small changes that are made on an individual level and cost you nothing but a couple extra minutes. Putting out your recycling on the designated pick-up day is great, but we should be working every day to decrease the amount of waste we produce. And using a refillable water bottle is a great way to cut down on plastics, but we also need to think about water in terms of how much is wasted down the drain while we are brushing our teeth or soaking in a full bathtub. When we add all the small things together, make three or four simple improvements rather than take pride in doing just one, it really can make a big difference. We shouldn't need a special day to remind us to take responsibility for caring for the Earth. By now, it should just be second nature.