Why do we drink? To be the stars of our own stories. 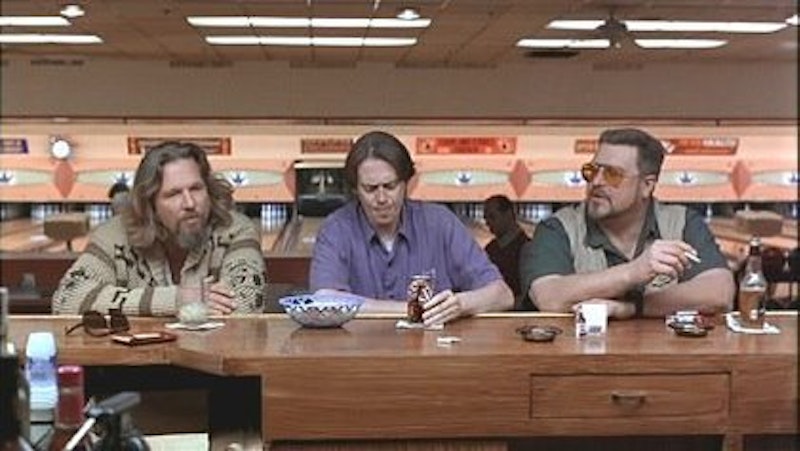 Two nights ago, I drank enough booze to kill a small pony. My liver was doused with the standard accoutrements of the universal collegiate bash: poorly made gin and tonics, vodka of questionable quality, margaritas that smelled like tequila mixed with tequila, and of red solo cup after red solo cup of Natty Light.

I may be a degenerate, but I'm not a run-of-the-mill alcoholic... yet. As a college senior graduating in two days, I have no more classes and no future; two of the most socially acceptable reasons to get blackout drunk. And blackout drunk I got: I have the mystery bruise on my arm to prove it.

Alcohol is an odd substance. Forgetting an entire evening because you ingested a large-but not deadly-amount of a drug isn't really normal. Sure, weed might screw with your short term memory, but you don't forget being high. You don't forget tripping balls on LSD, otherwise annoying hippies wouldn't have anything to talk about. Coke, heroin, ecstasy, nicotine, meth: none of these black out your memory. Hell, even licking poison dart frogs doesn't force forgetfulness.

This makes sense. If you're going to do damage to your body or psyche, you might as well make some memories out of it. When you drink, you do irreparable harm to your brain and liver, you wake up with an awful headache, and you don't even get to remember why. There are some benefits to this potential blackout: justification for sleeping with that girl/guy/house pet and guaranteed forgiveness for anything said or done. That's pretty much it, though.

But people love drinking. Shit, I love drinking. It's the American drug of choice, and I'm an American through and through. Sure, other countries love drinking, too, but they have a different relationship. Children in foreign lands are brought up to consume considerable quantities of alcohol without reaching the blackout breaking point. When we Americans drink, we drink at one speed: fast forward. As in, fast forward to the morning because that's the next thing we remember.

There are possible whys for the phenomenon: draconian drinking ages, historical workman-like Protestant ethic, or the 40-hour work week. Yet none of these explain why we drink this way. Something about being an American-especially an American aged 14 to 22-leads to binge drinking.

Despite the annual Newsweek special report blaming School for the phenomenon, this certainly is not the case. People aren't crushing Natty Light because they're stressed out about class 24/7. Maybe a couple people are, but most blackout drinkers I know aren't exactly school-obsessed. Most usually have very little responsibilities-all the more time for "drankin."

Petty alarmist reports of various quality/believability-"It's the decline of morality in America!"-ring hollow. We're not getting drunk because we take the lord's name in vain and covet our neighbors. I may have the tendency to get drunk and begin worshipping false idols, but I'm pretty sure it's an uncommon practice. Look, we get drunk because that's what we do. Binge drinking today is the same as it's been since the 1960s. For the last 40 or so years, high school and college-aged kids have been drinking massive amounts of booze with the purpose of forgetting their evening. My kids will drink stupidly just like I did/do.

What's striking about this isn't just its permanence but the timing. Drinking habits for America's lost/troubled/wicked youth were different 50 years ago. The Baby Boomers decrying underage drinking now were the founders of the practice. College campuses became drink-to-get-drunk havens in the 1960s and have been ever since.

After wading through a series of potential WHYs, I figured it out and know who is to blame. In fact, the answer was so obvious I can't believe that I hadn't stumbled across it before. The drinking problem in our fair nation has no solution, but it does have a cause: HOLLYWOOD.

The same people that brought us 27 Dresses brought upon us a tendency to drink a ton. Now, this isn't some morality "learned behavior" mumbo jumbo. Watching James Bond drink martinis doesn't put a martini in every kid's mouth. I didn't purchase a forty immediately after watching Can't Hardly Wait. I refuse to believe that a film featuring Melissa Joan Hart could really shape a malleable American mindset. People can make up their own minds.

And that's part of the problem. Kids finally grew up with Hollywood in the 1950s. Films and movie stars became ubiquitous. What, inherently, is a film? It's a glorification of individuality and storytelling. The emphasis is on specific characters and their story. The Sergei Eisenstein individual-less Soviet style died. We watch people make up their own minds on screen and we make up our own minds about them in the real world. Television does the same thing, so you better blame that, too.

What does any of that have to do with drinking? Easy, we all want to be stars. We can't help it. That shy kid in your physics class? That anti-social weirdo who always hangs out in front of the Starbucks? They want to be stars just like everyone else. We grow up watching an idealized version of reality for which we strive. We sit-disassociated and captivated-and we watch stories play out. We want to be a part of those stories, but we're stuck outside of them. It's just like being drunk. Alcohol is a dissociative drug, and you feel like you lose control of yourself. You're watching yourself do things you wouldn't normally do or maybe things you would normally do. You're the audience for your own film.

Then you forget. The first thing that everyone does the morning after blacking out is ask their friends/lovers/family/hospital attendant/co-workers, "Ugh, what did I do last night?" This is not a rhetorical question. People really want to know. It's the one odd social situation where someone narrates your life to you, mundane details and all. Basically, after you black out, you get to sit and listen to people tell stories about you to you. You become the main character in a story that doesn't fit in with the rest of your life.

When you can put yourself in a story because you remember it, it instantly loses that disassociated feeling. It's a memory. But to become the main character in a story that you don't know is sublime. You were watched like TV. You even got to watch yourself for a little bit. Someone else, maybe the drunk version of you, played you for an evening. You got the night off. Nothing else can bring this odd sensation.

The individualist nature of the American spirit separates us from other places where TV and movies dominate youth culture. We value our independence and the ideal of our rags-to-riches mobility. We think we can do whatever we want. We want to be stars, and deep down, we believe we can be stars. Sly and the Family Stone have a song titled "Everybody Is a Star." It's part of our cultural stamp.

So we try. Thursday, Friday, Saturday, Tuesday... and sometimes Wednesday nights, we try. Then we grow up. We have to face the music. We have to get a real job and we realize that we're not going to be stars. We become hardened. I guess binge drinking is sort of a youthful idealism. It's our chance to be the main character in a film or-if you're a frequent drinker-TV series during a time when we really think we can do anything.

And that time ends for me in two days.