In which our esteemed columnist reminds readers that television and the internet are different things. 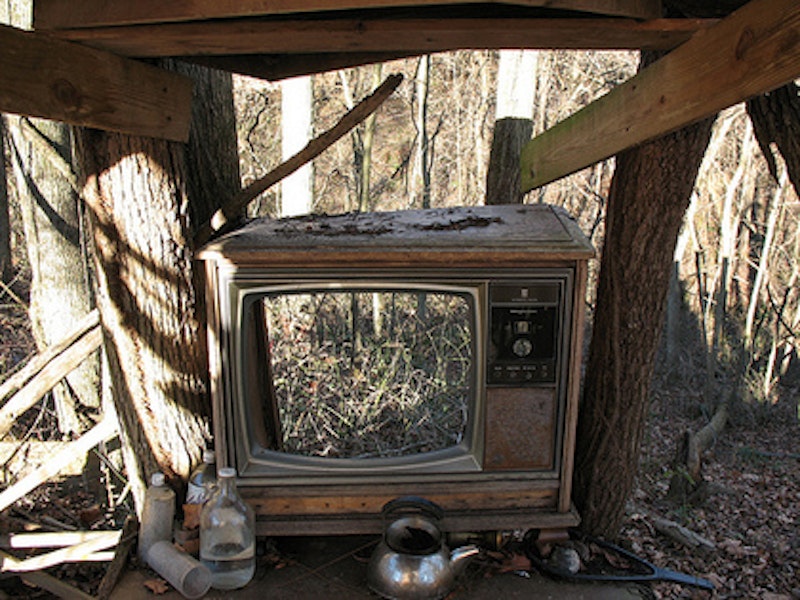 Have you seen that, the teevee on the Internet? Man, I love teevee, even when it's on the Internet, like, I look at this Hulu thing every once in a while, and I'd totally watch all of it, except maybe for that Dude, Where's My Car? movie, and I also dig this "TV Classics" deal on the CBS dot-com, but I think all that stuff is designed for people to watch while they are at work goofing the fuck off. When I wanna watch teevee, some Serious Television, I pretty much just want to plotz my ass on a comfy sofa and watch me some Television on the teevee, as Intelligent Design intended.

But I gotta tell you, I'm Worried about My Televison. And look, I ain't gonna provide Documentation supporting my previous claims of Black Belt of Television status, because a True Master of Television moves in silence and is not boastful about being quick with the remote, even in matters of business or with some reasonable complaint.

Right now I have my big teevee-watching Robe on, and I have the hood pulled over my head so that my face is in Shadow and you can only see the blue light of my Toshiba 26DF56 Widescreen SDTV reflected between the red lines in my eyeballs. I have an important Television message for whomever the shot-caller is at that fucking Saturday Night Live show that's on Saturday nights, and is Live, sometimes. First of all, there was a big writers strike, right? I ain't gonna lie, I can tell you now that Television As We Know It was on the verge of Extinction or getting Scabbed over or something.

But everything ended up OK, the money got spread around, and that's OK by me, I totally support Anarco-Syndicalism or whatever gets those writers back down there deep in the Writers Mine to go dig me up my Entertainments, which I pay for in at least two ways ways; my monthly offering of Tribute to the host of gods constituting Cable Television, and through advertising markup on some of my favorite Name Brand foodstuffs and snacks. And I move a lot of fucking groceries, man. Especially in the area of Prepared Name-Brand Foods That Are Colored Orange And Have the Word "Cheese" or Cheez" In The Name. And I keep my remote clean, man; you don't think it's not a bitch to get that Orange Dust off my remote? Hah?
Anyway, even for Broadcast Television, I am a Paying Customer, and all ironical-like, I am (thanks to the Splice Today and the Internet) standing right at the front of the line here at the Complaints Desk, pointing the invisible teevee-controlling light toward the Truth.

Saturday Night Live, yes? Live? Look, I know I'm late to the party getting bent and/or twisted about this, but I kinda thought it would stop by now, except there was that writers strike and everybody felt Sad about Television. I know I did. So look, like, am I out of my mind or when the strike was over, wasn't there this big "oh boy the writer's strike is over and now we're gonna get to work" thing, and then the Saturday Night Live was on for a couple-three weeks and then took a couple weeks off? Wha? How does that work? Shouldn't there be like this big buildup of comedy from the strike? I don't want reruns of live teevee three weeks in to what's left of the season! Gimme!

Internet + Everything in The Whole Wide World = the Sewer

The faucet dumps into the sewer.

Saturday Night Live, why are you copying the Internet? Go make the Internet on the Internet, for fuck's sake, go ahead and make some YouTube-looking shit on a teevee-show budget on the fucking Internet, not on my teevee. I want teevee on my Television and while you are at it, put some fucking Television on my goddamn motherfucking teevee. God damn it. Saturday Night Live is supposed to be about well-seasoned comedy writers and inventive and entertaining Improvisational Performers whose antics are carefully crafted and vigorously executed to Make Me Laugh until I fall asleep during the second musical number or drift away and go out for another pizza only to come back to that boring-ass Poker After Dark show.

And another thing: look at this.

It looks like everybody is looking at cue cards. Now I can understand how whoever the guest host is might have to be looking at cue cards, but for fuck's sake, why can't the people who have been performing on this fucking show for years either get their lines down or at least look at the goddamn cue cards without looking like they are looking at the goddamn cue cards? Can't you at least look someplace other than directly at the effing cue cards for even two seconds? It's totally fucking distracting! I watch these people and they make me mad because they don't look like they are working hard for my amusement! I want to see effort while I am home in my underpants watching my Toshiba! And make the fucking news segment longer