Lessons from a life among the boys. 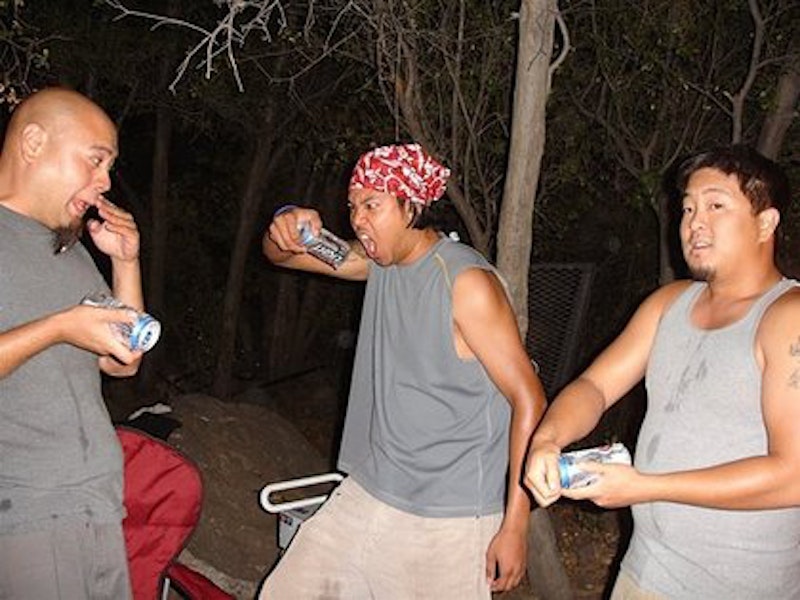 At 12 years old, I was the only girl on an all-boys soccer team. I had to learn how to switch jerseys without ever being topless, moving from white to red by double-layering, shimmying out of one and pulling it up through the neck of the other.  During penalty kicks, I crossed my arms over my chest, while the guys cautiously cupped their junk. Opposing players slammed into me, knocked me down, tried to cop a feel while I wrestled the ball from their feet.

In high school, I was the wrestling team manager, spending afternoons down in The Pit where the air was moist and heavy and the mats dripped with sweat. On Saturdays we’d travel in tightly packed vans to all-day tournaments where I’d fall asleep on the bleachers between matches and wake up to find some wrestler’s rank smelling warm-ups flung across my face.

For two years of college, I lived with six guys. They stunk up the bathroom and never cleaned the kitchen and insisted on holding vapid, obnoxious conversations from separate rooms, each of them shouting louder and louder across the hall as they watched the same sports game on their own respective TVs. And while I loved them each individually, they were collectively one giant pain in my ass.  They fought idiotically about whether the Washington Wizards’ uniforms were teal or blue. They whooped and hollered and jumped up and down as time and again a Super Mario Kart race came down to a neck and neck finish. “Finish strong!” they would yell.  “Yeah suck it!” every time a winner was declared. They burped and farted and sat on the living room couch, hands down their pants while other people were eating dinner. They ate off each other’s plates when one of them would leave the room. They threw their garbage on the floor and used dirty paper towels found lying around instead of getting up to grab a clean one. They were really gross and completely ridiculous and acted like a bunch of macho idiots 99 percent of the time.

But they were also giddily excited when my fiancé and I announced our engagement. And when they thought no one was around, they giggled with their girlfriends and called them pet names. They drove out to Build-A-Bear for girlfriends’ birthdays, sealed their cuddly gifts with a kiss. When I was upset, having a bad day, they didn’t puff out their chests and ask whose ass they should kick, but pulled me close and hugged me and made sure I’d be all right.

I’ve been friends with a lot of guys in my short lifetime and while I’m by no means an expert on men, I do know a thing or two. Despite being gross and stinky and altogether way too competitive about really pointless things, men aren’t nearly as macho and Neanderthal as you might think, or as they might make themselves out to be. There is a very stark dichotomy in the way men behave with other men and the way they behave with women. It isn’t about sex. It has nothing to do with somebody trying to get laid. I was never attracted to any of my guy friends and they were never attracted to me. But all the same, they all acted one way when we were in a group, and an entirely different way when they were with me one-on-one. There wasn’t the same sense of competition; the same need to have the last word or prove a point. And it wasn’t forced reservation. They came by it naturally, honestly. They were kind and sensitive and suddenly funny in a way that had nothing to do with cutting someone else down. I’m not saying they were more real with me, more true to themselves. They were just different.

Since graduating from college, I’ve come to realize that I’m the same way. All of my friendships operate now by phone and email, or online during the day when I should be working, at night when I’d be better off going to bed. The detachment has given me some perspective on who I am and how I operate with my friends. I chat with my guy friends online about how much Jason Grilli sucks and how it feels like the Tigers will lose every game this season. I seek out these conversations; start them myself. I crave the opportunity to talk about sports and how, even in the off-season, Jim Tressel manages to act like a douchebag.

Then I leave work and call one of my girlfriends and go on and on about centerpieces, how I can’t wait to wear capris, how I need to get a new pair. Conversations focus on cramps and heels and boy troubles. All things typical girl. It feels like I’m overcompensating for being too masculine earlier in the day. But really I think it is all about searching for some kind of natural balance. Trying to create some kind of harmony between the part of us that screams fuck at the TV when the opposing team throws a long pass for a touchdown and the part that doesn’t regret kissing a little heart and sealing it up inside of some cutesy teddy bear, no matter how much crap we may have gotten from our friends.

I like watching football and drinking lousy beer. I like wearing sweatpants and no makeup and not showering when I’m totally hungover even though I definitely stink.  But I also like shopping for lingerie and cute summer dresses. I like filing my nails into nice round tips and wearing high heels even though they make my feet blister and ache. There’s still so much emphasis placed on defining people as men or women. Guy’s-guys vs. girlie-girls. The reality is, men aren’t hailing from Mars while women are heating it up on Venus. People just are who they are in a way that’s not so easy to compartmentalize. Maybe that seems really obvious, like I’m telling you something you already know, but it is also easily forgotten.

I grew up as one of those girls who was always just one of the guys and while I was maybe a little more emotional and always had the longest hair, I never felt like an outsider, was never really all that different. Ultimately, my guy friends and I are really all just alike: we all love Saturdays devoted to football and we all get at least a little bit excited about the idea of me shopping for lingerie.