Is a mild case of paranoia destructive or harmless? Sometimes focusing on unlikely disasters distracts you from the mundane worries of life. 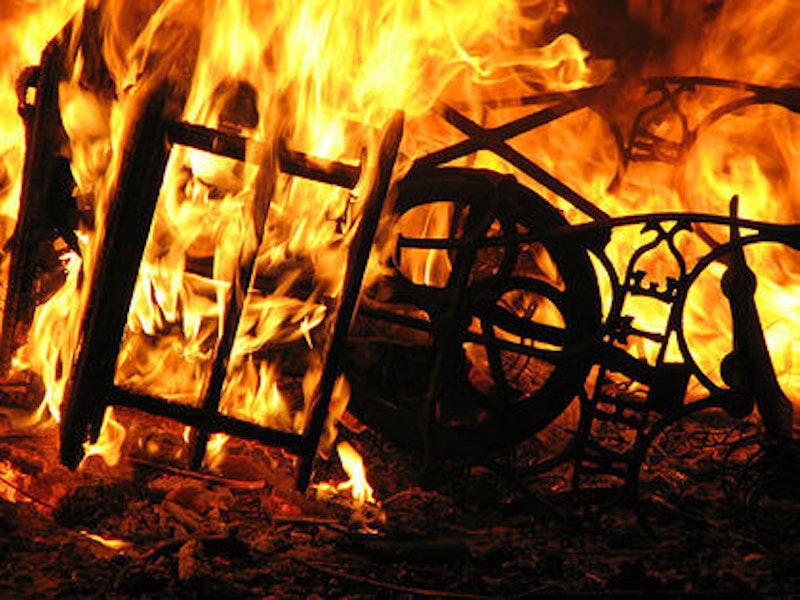 I’m a pretty big scaredy-cat. Maybe it’s my overactive imagination—great for short story writing, not so good for maintaining sanity. The problem is that I build things up in my mind and turn unlikely disasters and traumas into surefire occurrences. They might not have happened yet, but I’m positive that in time they will. And the fear can at times take over, not in a crippling, paralyzing way like a true phobia, but enough to make me wonder if I’m crazy.

Fire is the worst. I am terrified of fires. The more appliances that we have running in the apartment, the more positive I am that the whole place is about to burst into a ball of flames. It’s hot in Baltimore, now that summer has arrived, and our apartment becomes a sickening heat bath without fans and our two window air conditioners running. But I can’t stand to have them all going at once. I’m convinced that the fans and air conditioners are fighting for the same energy supply, a back and forth struggle of superior cooling that will only end in a split wire, a spark somewhere deep in the ceiling where I can’t notice it until it is too late and the living room will become engulfed in flames, burning my husband and me alive, as we sit on the couch watching The Office.

I check the oven every night before going to sleep. Sometimes twice, or even three times. I’ll ask my husband if he checked it too, as we lay beside each other in bed, the sheets kicked onto the floor because the room is sweltering from my insistence that we run only the fan at night. “Yes. It’s off,” he assures me, but I ask again five minutes later. And 10 minutes after that. It shouldn’t matter anyway because I don’t envision some small kitchen fire that slowly spreads its way through the apartment, leaving us with enough time to grab our few meaningful possession, tuck the cat under one arm and escape from our burning home. In my mind, it’s always the kind of fire that no human being could survive: an unexpected, sudden explosion of flames. A fire that you only see in spy movies or one starring a Harrison Ford type who’s really much too old to be leaping from burning windows or hanging off the side of a plane.

And don’t get me started on planes. My fear of those is second only to fire. Takeoff is always worse than landing. That is, until landing comes, which feels a million times more terrifying than takeoff ever did. I shut my eyes, tightly grip the armrest until my fingers turn from pink, to red, to a ghostly shade of white and think to myself, I’ve got to stop watching Lost. You’re more likely to die on your way to the airport than you are to die in a plane crash—you hear this time and again. But that makes no impression on me. Besides, I’m terrified of car crashes too, so I don’t need any further convincing of my imminent death every time I close the door and buckle up. It’s not the vehicle that matters, the mode of transportation. Planes, trains, automobiles, they all conjure the same imagine in my mind: my limp, lifeless body lying alongside searing wreckage, possibly dismembered, definitely bleeding, undeniably dead.

I gravitate toward anything that can assuage my fears and prepare me for the terrible disasters that are certain to come. So when I stumbled across an interview with Amanda Ripley, author of The Unthinkable: Who Survives When Disaster Strikes—and Why, and sat in Barnes & Noble on Tuesday to read the first 20 pages or so, I felt fairly empowered by her words. She emphasizes the dread equation—which sounds more like the title of some B-Horror movie or an early 90s computer game than an analysis of fear—as an explanation for why we are afraid of things that are so unlikely. Dread, she says, equals uncontrollability+ unfamiliarity+ imaginability+ suffering+ scale of destruction+ unfairness. It’s a little convoluted, but it makes sense and really does explain why I’m more afraid to die in a fiery plane crash than of a slow battle against cancer, even though the latter is far more likely.

Ripley goes on to explain that fear is compounded by ignorance and a lack of information on what will keep you safe (and alive!) when disaster actually strikes. Rather than simply taking away our shampoo and tweezers and making us walk barefoot through security, she explains, airlines would be better served by educating passengers about what they should do in a terrorist emergency. But instead, Ripley says, we are all too often simply told not to panic should disaster strike, which, if you ask me, only heightens the fear.

It was reassuring to read that over the course of her research in speaking with survivors of plane crashes, hurricanes, earthquakes, and even tsunamis, Ripley found that most people reported feeling calm and collected at the exact moment when they should have feared most for their lives. The brain takes over and turns its focus to surviving, ignoring the fear and working out a plan to save your life.

The emphasis, and purpose of her book seems to be that knowledge is more powerful than fear. By learning how and when disasters are most likely to occur, the true likelihood of surviving them, and how best to increase your chances of survival, Ripley claims that you can greatly decrease your anxiety about disasters. Statistically, she explains, people can survive most serious plane crashes. Even nuclear attacks aren’t as devastating as we may believe them to be.

It’s doubtful I’ll ever reach the point when I’m not tempted to check the oven before going to bed. I’ll probably always tense up when a plane engine first cranks into action, or the wheels hit the tarmac with a hard thud when we land. But the little bit of knowledge I’ve gained from reading this interview, and the very beginning of the book, makes me feel more secure that each new minute of my life will not be my last. Odds are I’ll one day get struck down by lightening, or ravaged by a shark while cooling off in the ocean during a family vacation. But maybe that’s just fine. Both those fates seem more desirable than slowly wasting away in some mental institution because I drove myself crazy with fear. Now that would be terrible. I don’t even want to think about it.