Our pundit-in-training uses steely cold logic to explain why Hillary Clinton would make the perfect Veep for Prez Obama: protection. 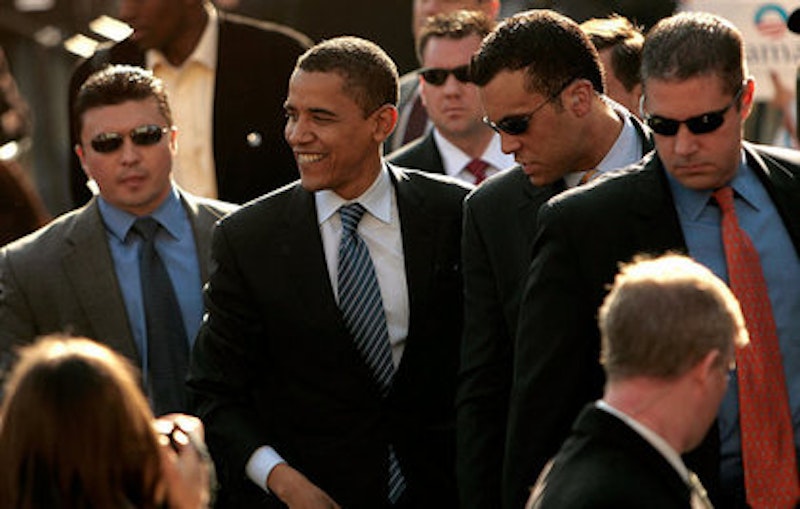 First of all I would like to get away from my usual Important Topics such as Snack Food and Teevee and I Hate Pennies and get into the Election Politics with Obama and Presidents and all that crap for a minute, so I can to remind errbody I Was Right, and I was Right in a totally Country-When-Country-Wasn't-Cool way long ago.

See, I put that shit out there in January of the Year of Our Lord Two Thousand Zero-Zero Seven, man, and while I totally fumbled on the Super Bowl prediction, I called the Politics, and I'm not switching up my Vote. I was totally expecting some Pundit work on one of those shows where people wear nice clothes and ties (I'd have to get an advance on the appearance fee to get that going) and agree or disagree or agree to disagree with each other, but I guess my Readership ain't quite what I thought it was, even here on the Web that is World-Wide.
So I would like to take this opportunity to remind anybody who'll listen or read or whatever, I am available for jobs on all those Pundit shows where people talk forever about this shit all the time. I could totally do that and Get Paid.
Hillary Clinton got beat exactly for the reason I said she would, which is she's a stiff, man. Totally awkward and uncomfortable-making. I don't care how much she's got it together in her Real Life, she jumped into the Politics, and when you do that, you gotta bring some personality-plus, man. So anyway, with that outta the way, I'm thinking she's the best move for the Vice-Obama President and for once, I got some cold hard Logic behind this, and Logic is Not Pretty.
Hillary Clinton got harshed on because she kept saying stuff that was: Just. This. Close. To saying Obama was gonna get assassinated in the manner of Robert F. Kennedy, who was super-young, super-charismatic, and super-gonna plow over the whole field and get voted POTUS. It was not the smartest shit in the world to be talking when you are running for the same job, so she got called for it, and that's totally fair, and that's some Real Politics, but what's also Real is you gotta be kidding me, you don't think somebody is gonna take a shot at Obama? Look, man, the famous Comedian Chris Rock made a joke about how if there was ever an African-American Vice-President, then he would be in line to shoot the Prez and get treated like Royalty in jail:

Dennis Miller: More on this from SNL news correspondent, Chris Rock!
Chris Rock: Thank you, Dennis. Now as you know, there's been a lot of talk about a black vice president. And I just wanna tell the world that it'll never happen. As long as you live you will never see a black vice president, you know why? Because some black guy would just kill the president. I'd do it. If Colin Powell were vice president, I'd kill the president and tell his mother about it. What would happen to me? What would they do? Put me in jail with a bunch of black guys that would treat me like a king for the rest of my life? I would be the biggest star in jail, all right, people would be coming up to me and I'd be signing autographs: "97-KY, here you go." Guys would be going: "You're the brother that shot Bush. And you told his mother about it huh? I hope my children turn out to be just like you, Man, you know I was getting ready to rape you until I realized who you were. And even if they had a death penalty, what would happen? I'd just be pardoned by the black president. So you see, Dennis, it would not be in George Bush's best interests to place Colin Powell on the ticket.

And here's the link to the quote I scooped off'n the IMDb.com. See? That's some cold-blooded Logic, man, sit down and work that one out on paper if you can't see it all the way through. It is also inappropriate and humorous, and see you in Hell, and I did not hear anybody holler about how anybody who is not African-American in that joke should be pissed and take Umbrage or whatever. That shit makes perfect sense. Show me how it doesn't.

Somebody is totally gonna try to kill this guy! He's in Robert F. Kennedy-Malcolm X-Martin Luther King-territory now! He's talking about Uniting and Not Dividing for reals! I previously suggested he find the tallest, fattest person available for the Vice, but I got it all figured out: Hillary Clinton!

It's a logic trap! If they (and you know who They are) try and waste Obama, then Hillary Clinton gets Presidential! Rock/Hard Place! Lady/Tiger! Choose 'em up, Hobson! And yeah, yeah, the quick Negativity answer is knock 'em both off, but that of course, would mean GORE.