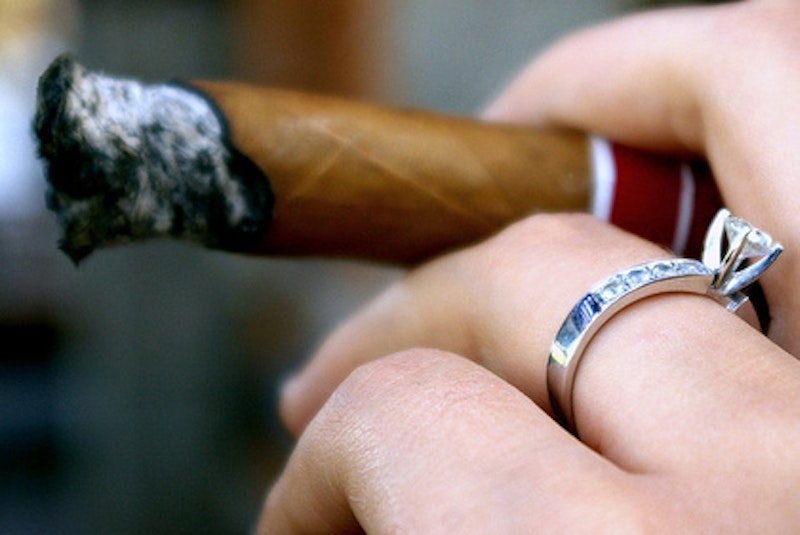 There is a billboard on I-83 South in Baltimore that I see whenever my husband picks me up from work. It’s an advertisement for Smyth Jewelers with an enormous diamond engagement ring plastered in the middle. Across the top in big black letters, designed so that it looks like the ring is actually speaking these words, it reads: “This may be the last decision you get to make.”

Get it? Because you’re a guy and you’re getting engaged, and then married and because women are evil, controlling shrews who like to tie your nuts in a knot and never again let you do, think or feel anything on your own! Perhaps I’m a bit too sensitive, having just gotten married, but I hate this billboard. It’s incredibly offensive, not to mention wholly idiotic—if you’re trying to encourage men to spend money on engagement rings, wouldn’t it be more advantageous to make marriage sound appealing?

It is really a perfect example of the subtle sexism (as subtle as a towering advertisement can be) that remains all too pervasive in American culture. It’s meant to be taken as a joke; the kind of thing that a stable married couple heading into Baltimore to catch an evening baseball game could see and, with a knowing glance and casual chuckle, shrug off as just plain silly, because really marriage is all about compromise, joint decision making, a shared life based on mutual respect and participation. In a sense it’s a harmless advertisement: it’s really only meant for people who have marriage in their futures, who don’t believe that getting married is little more than a socially-accepted version of male castration and are therefore, unlikely to take the joke to heart. On a micro level, it’s nothing more than a stupid billboard that may or may not be funny based on your personal sense of humor. But as one example in what feels like an endless sea of subtle attacks against women, it helps further perpetuate outdated and completely unsubstantiated gender stereotypes. It cuts women down to size, makes us the butt of the joke and raises men up. Women are ridiculous and domineering—good for you fellas for having enough courage and open-mindedness to marry us anyway.

I don’t generally let things like this bother me. I’m usually more than capable of allowing casual sexism to just roll off my back—if you want to be sexist, that’s your problem. I’m not going to let your idiocy ruin my life. But lately, grappling with my own issues about getting married young and what that means for me as a woman, I’m finding it harder and harder to just smile and shrug it off, to accept it as just a little joke.

Take for instance the Time Out New York magazine cover that hit newsstands before the premiere of Sex and the City that featured the film’s four leading actresses with duct tape photo-shopped over their mouths. “Enough already,” the cover exclaimed. “We love ‘em, but it’s just too much.” I understand the sentiment. The press for this film has been absolutely insane. But putting duct tape over a woman’s mouth, for any reason, is never an acceptable practice. For starters, it immediately conjures images of sexual abuse and violence and sends a very clear message: we’ve heard enough from you ladies, time to shut the hell up. But it’s not as if these four women are doing anything different from every other actor or actress who goes on a press junket. The promotion overload comes less from the film’s stars and more from the women who are interested in the movie. By duct taping the mouths of Sex and the City’s main characters, Time Out New York is really telling all women to shut up—those who wrote about the film in excited anticipation, those who picked it apart for its excessive consumerism, the shallowness of the lives it depicts. To all the women who cared about this movie for any number of reasons and were the driving force behind the flood of press, Time Out New York wants you to shut your mouths. Stop talking about the things that interest you. Maybe just stop talking all together.

Again, it’s really just a joke. I’m sure the editors at Time Out New York don’t actually believe it’s appropriate to duct tape a woman’s mouth shut. And if I had to put my money on it, I’d guess they’re not really all that sexist either, no more than the average 21st century person at least. But all the joking helps create a culture in which men think it’s okay to lean out of their cars windows and whistle or holler at women on the street. A culture where, at my own wedding, someone seriously asked me if I now planned to quit my job. Or worse yet, one where yesterday some guy thought it was okay to pull up beside me as I waited to cross the street and offer to give me a ride home, if I had sex with him first. That’s hardly a fair trade.

Do we live in a sexist culture because our advertising promotes these beliefs, or is our advertising sexist because it merely reflects our cultural climate? I don’t really have an answer, but I know one thing for sure: a giant billboard that jokingly calls attention to one of the oldest and least humorous stereotypes about women and marriage isn’t helping anyone.