Gas and food are expensive, sure, but let’s talk about the real price crunch: cigarettes. Advice on how to pinch pennies while maintaining your unhealthy habit. 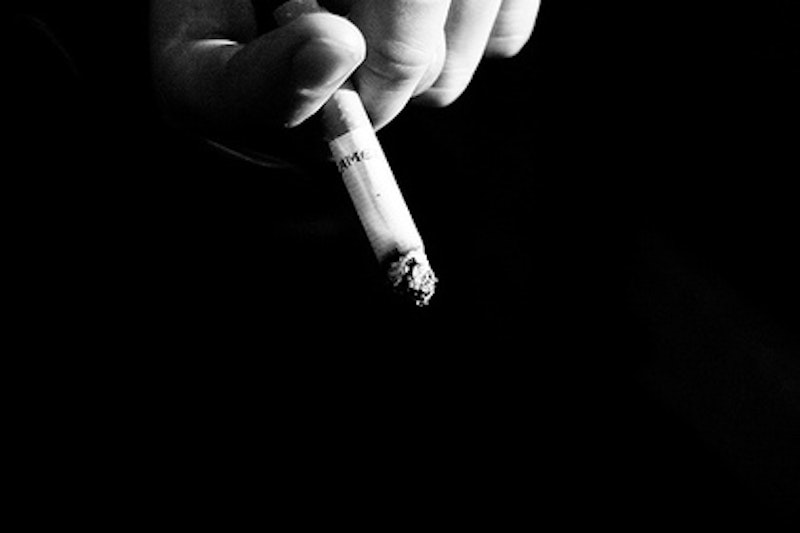 This month marks my five-year anniversary as a smoker. Over the past five years, I've spent thousands of dollars on cigarettes, smoking anywhere from half a pack to two or more packs a day. I've maxed out a credit card just on bar tabs and cigarette cartons. I'm a recent college graduate, I'm unemployed, and I just spent my last $5 on a pack of Pall Mall regulars. Financially smart? No. But I refuse to quit. I love cigarettes. I love everything about them: the taste, the smell, how they make you look (you know they're cool), how well they go with a cup of coffee or a beer, how easy they make it to start a conversation, especially with hot girls.

Yeah, yeah, I know, they're bad for you. Lung cancer, heart disease, emphysema, birth defects, whatever. Fuck the Surgeon General. I'm taxed $2 or more per pack in Maryland and now I can't even smoke in bars. It's ridiculous. I already have to put up with enough shit from non-smokers—the looks they give you, the fake-cough when they pass you on the street, the "you should really quit" talk they insist on giving you. I don't tell you not to order your steak rare. Don't tell me not to go out for a cigarette.

Anyway, look, with gas now $4 a gallon, and the price of, well, pretty much everything going up, I thought I'd offer some practical advice for all the poor smokers out there. Sure, you could quit. Save your money. But we all know you're not going to do that, and smoking Jacks is not the way to go. Try to keep your dignity. So here're five options for you:


1. Roll your own: This is of course the proven way to cut back on cigarette costs. The standard small rolling tobacco pouch and rolling papers (usually making 50 cigarettes) will cost about $6. It takes some practice, but once you get it down, well, remember that scene in Pulp Fiction where John Travolta rolls his own cigarette and Uma Thurman gets all turned on? Yeah. 'Nuff said.


2. Online cartons: By now, I think it's pretty well known that you can buy just about anything cheaper online. And that goes for cigarettes too. A quick Google search of "Cigarette cartons online" will come up with no end of discounted offers. And though they have Marlboro and Camel and all the other American brands, it's also fun to try out foreign brands. I don't know where the hell ABBA cigarettes come from, but for $8.99 a carton, I don't really care.


3. Small filtered cigars: Okay, so you're not really supposed to inhale cigarillos (what with their having three times the amount of tar as a cigarette and all that), but whatever. I've done it. And they're cheap. In fact, they're very cheap. Of course, some brands are better for this then others: Hats Off, which set me back about $1.25 the last time I bought them (for a pack of 20), aren't really much different than regular cigarettes; Winchester's, however, may leave you coughing up blood.


4. Bumming: We've all done it. Let's be honest, smokers are damn generous. Most of us will offer a cigarette if asked. And if you're an infrequent smoker, you can pretty much get away with only bumming cigarettes. I went months successfully bumming half a dozen cigarettes or more a day. No, I'm not proud of it. And yeah, I had the reputation as "that guy." But it worked. And here's a suggestion: if it's someone you don't know, offer to pay him or her. "Hey, any chance I can get a cigarette off you? I'll pay you a quarter for it." Almost no one will actually take your money (even though at $5 a pack, a quarter is about what one cigarette costs) and it'll make you feel like less of an ass.


5. Half-Smoked Cigarettes: It sometimes happens that a person will smoke only half their cigarette before throwing it out, especially smokers on a quick break at work. If you're really desperate, you can re-light it and finish it off. Just make absolutely sure no one sees you do this, or you'll never live it down. It'll be like that episode of Seinfeld when George gets caught eating the eclair he found in the trashcan.


Just remember, everyone who was ever cool smoked: Humphrey Bogart, John Cassavetes, James Dean, John Lennon, Frank Zappa. The list goes on and on. Even Barack Obama used to smoke, or maybe still does, as some of those Conservative blogs claim. In fact, Fox News recently spent at least half an hour on the question: "Would you vote for a smoker?" Would I ever. It sure helped FDR get shit done. And maybe if Obama gets elected we'll get some relief on those taxes. That way, I'll never again have to decide whether to buy groceries or cigarettes. Ah, who am I kidding, like I would ever buy groceries over cigarettes.