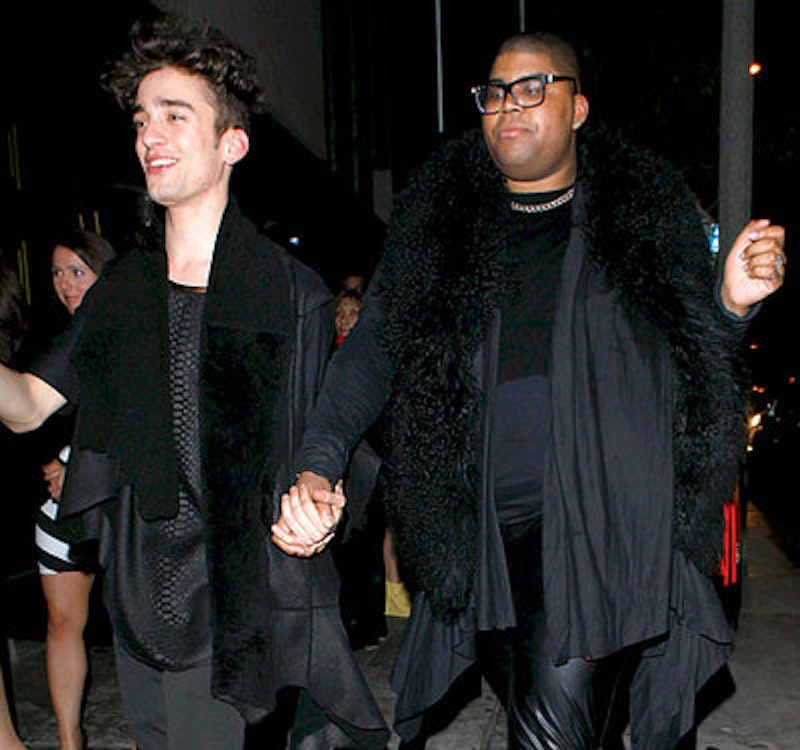 Magic Johnson’s gay son E.J. Johnson III is giving me what I need! E.J. made a splash all over the Internet this week when he stepped out in Hollywood holding some really hot guy’s hand causing my Facebook News Feed to blow up. Look at the photos—the as-yet unidentified guy is REALLY freaking hot. It’s a little ridiculous. Most blogs and news sites positioned this as a clear example of E.J. boldly coming out as gay. But I think it’s more specific than that.

If you haven’t seen the photo it’s amazing—just two interracial gay boys having a gleeful time. But the caption under the Us Weekly article is what really got me excited: “Magic Johnson's son, E.J., wears a black boa, a Chanel purse, and bedazzled pink shoes as he steps out in Hollywood with a male companion on April 1, 2013." Come on! E.J. isn’t letting you know he’s gay as much as he is coming out as FABULOUS. And you know what? He better do the damn thing.

Later on I posted a few Google image links to my Facebook of E.J. working some serious looks and one of my friends commented: “There is just so much ‘yas’ to this photo!” That’s because the power of black gay identity is the power of being fabulous.

Not only is the mysterious boyfriend like so hot, like out of this world hot, and not only is E.J. so fabulous that he is just snatching wigs left and right, but here are two cool, unapologetically non-normative queer fashion divas and I’d like the privilege to walk behind them at a comfortable distance and simply breathe the leftover air they chose not to take in. Somebody give them a reality show right now.

Euphemisms aside, this story is awesome because it’s very much about the difficulty of being a black gay man or, even more radically, a queer black faggot. In a world where white gay men routinely claim to be disinterested in people who are not white, here are a couple of attractive interracial people who buck that trend. In a world where most gay men are sizeist and say they only date people of a certain size, here is proof that people of different sizes can be together. And in a world where effeminacy or not being “masc” means you will be sexless forever—well, you get where I’m going. It’s one thing to be gay. It’s another to be queer. And it’s still another to be a fucking faggot who is coming for weaves and wearing Chanel purses better than anybody in the room and making everyone feel awful about the color of lipstick they chose to wear today.

You’ve heard all this before: the gay agenda is all about normativity now. We want marriage, we want to fit in, we want to be just like straight people. This is all fine—I’d like to get married too one day. But you don’t have to look far from outside of the gay world, and even within it frankly, to see how afraid people are of things that are a little bit or even a lotta bit non-normative, beyond the status quo. Everyone is quick to dismiss what they don’t understand.

I remember being a black gay boy E.J.'s age and feeling like the only way to be gay was to do exactly what my gay peers did. I bleached my hair blond because at the time the majority of my gay friends were white and they all had blond hair (not all of them naturally so). I wore Abercrombie because all the kids at my high school wore it and I wanted so desperately to fit in. It wasn’t until I got to college when I really started experimenting and doing things my way. This is the story of a lot of gay youth, no matter their upbringing or where they come from. The pressure to fit in and just be freaking normal is as intoxicating as it is suffocating.

People want to be liked, but at what cost? When E.J. came out of the closet this week he didn’t release a sex tape or kiss a boy or mime a sex act. He just held a guy’s hand and performed fabulousness as a double coming out: coming out as gay and telling you that, child please, you are not about to snatch this wig. Not this one.

So far, Magic Johnson and his wife Cookie have been really supportive of E.J., and most of us only wish we had parents who were that supportive. If I knew my parents were going to support me I would have started wearing high heels and glitter shoes much, much sooner! Anyway, they’ve even gone to the media about how proud they are of their son, revealing that they’ve known he was gay since he was 12 or 13. Well I guess so! At any rate, I hope E.J.'s brave act of coming out and being fabulous and not hiding who he is—sexually or stylistically—is a lesson for other gay youth out there as well as for other people who are hiding who they really are to just do you.