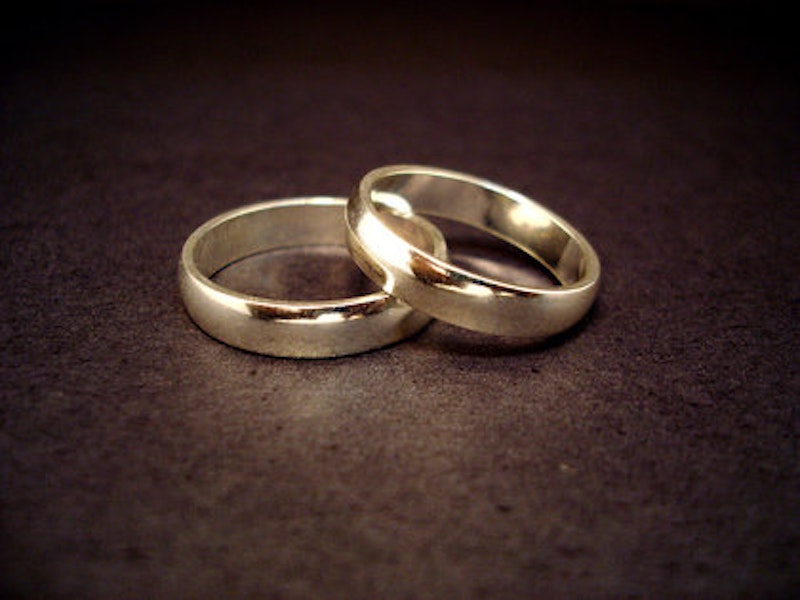 What is marriage? The answer is that it depends on who you are and where. Ancient patriarchal polygamists, for example, no doubt had a different conception of the institution than same-sex female couples in Victorian England (of whom there were not a few).

More specifically, then, the question is, what does marriage depend on for us—what do we think of it as, and is that thinking changing? Many people argue that marriage used to be focused on children and procreation, and that it’s now (and especially with the advent of gay marriage) moving towards a focus on companionship and love. Conor Friedersdorf, on the other hand, in a piece last week argued that love and companionship have been at the center of marriage for generations.

My idea of marriage has been powerfully shaped by my traditional grandparents, my parents, and even old novels like Pride and Prejudice, Anna Karenina, and Trinity. True, when it comes to women's equality and same sex marriage, I hold the liberal views of my generation. But marrying a romantic love is much older than my generation. So is marrying a best friend. So it doesn't feel like the institution I joined in October is different, at its core, from the one that my grandparents and parents joined.

I have no doubt that Friedersdorf is right about his parents and his grandparents—he knows them better than I do, after all. And, for that matter, the love-and-companionship view of marriage is certainly the one that obtained for my own parents and grandparents. My mom, especially, was never shy about informing her two sons that her main goal as a parent, from very early on, was not to build her marriage upon us, but rather to get us off to college and permanently out of the house—or out! out!, as she would say. My grandparents, too, like Friedersdorfs, spent the bulk of their lives together after their children had grown up and moved on. At my mom's father's funeral, I vividly remember my grandmother hurrying to the coffin when it was wheeled out, crying "my baby!  my baby!" It was one of the most heartbreaking things I've ever seen in my life. I don't think there's any doubt that their marriage was based on love.

But while companionate marriage was definitely the norm in my family, and apparently in Friedersdorf's, that doesn't necessarily mean that that is the only norm. My wife's father's mother, for example, was born up in the Appalachian hills of Kentucky. She married when she was 15. She had nine children, the last when she was almost 40. Her marriage was largely devoted to caring for them—and to cleaning, tending to the chickens, and pigs, helping on the farm, cooking, washing the clothes out in the stream till her hands were raw. She never left the area, and most of her kids stayed nearby as well. She spent her life surrounded by them, and died in the house where she'd spent most of her life.

I've been told that my wife's grandmother and grandfather got along very well when he wasn't drinking. But it's pretty clear that their love, and their companionship, operated in a fairly different context than the one familiar to Friedersdorf's or to mine. Her marriage may have been an emotional partnership, but it was also very much an economic partnership, based on shared labor. Part of that economic partnership was predicated on children, who were raised in part to help on the farm, and who then became a community that would last throughout her life. My wife's grandmother's marriage, in other words, was much closer to the kind of traditional, procreative marriage that anti-gay-marriage proponents advocate.

I don't know how Friedersdorf's parents and grandparents made their living. But it seems at least possible that the fact that Friedersdorf's family has long had a vision of companionate marriage may have something to do with the fact that his family—like most families—has occupied its class position for a long time (as, for that matter, has mine.) The shift to a companionate marriage in our culture, then, might mean, not that the 1960s transformed everything through the culture war, but that the long move away from a rural economy has made traditional marriage practices more and more obsolete.

There has not, then, been a transformation of marriage for everyone, but rather as a slow, long-term encroachment of one vision of marriage over its competitors. That version of marriage is companionate in ideology, and broadly middle-class in origin. The outlines of that view were surely clear as far back as Jane Austen. Darcy and Elizabeth don't get married because they want kids to work on the farm, but because they're friends and want to spend their lives being friends. But there were also competing memes. Upper-class marriages (such as the one that Darcy's aunt wished him to enter upon) could be seen as focusing more on children as heirs. Rural lower-class ones, with their overtones of labor, could be seen as focusing more on children as potential workers.

Marriage equality certainly builds on ideas of companionate marriage, and perhaps strengthens them (which is all to the good, in my view.) But even though those companionate ideas have been around for a long time, it doesn't necessarily follow that they've been predominant for everyone. Marriage depends, after all, not just on when you are, but on where you are, both physically and in the class structure. Part of the great power of companionate marriage, and perhaps one of its weaknesses as well, is that it encourages us to forget that.