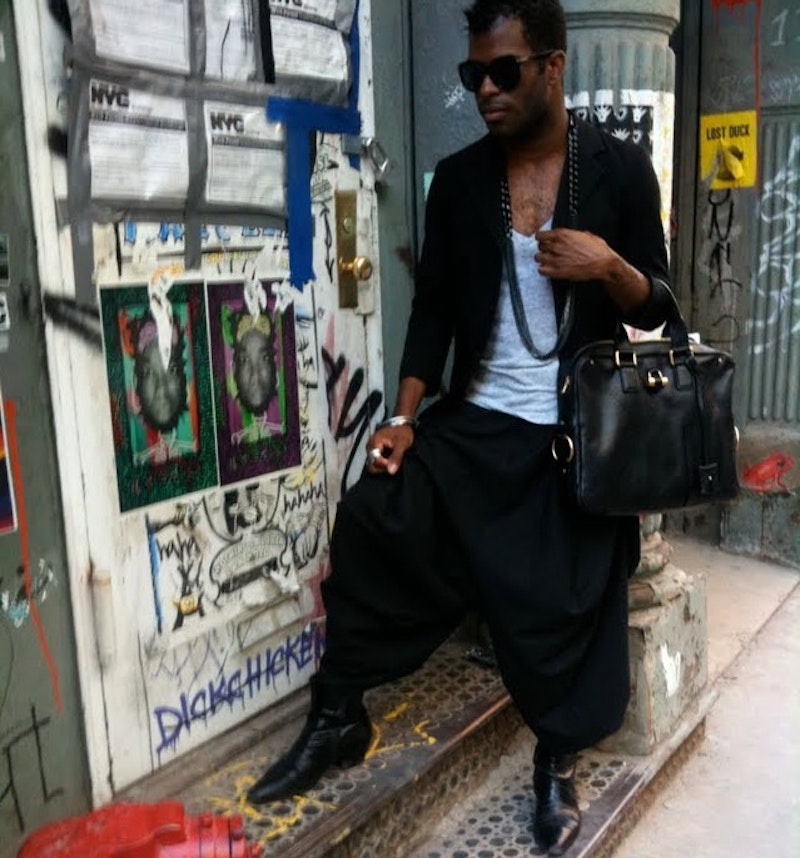 Okay, I admit it: for the past few days I’ve been dying for my very own pair of drop crotch pants. They’re the hippest pants in the world, so I obviously need a pair. It’s basically a pant with skinny legs and a really low crotch—As If You Have Enormous Cojones Low.

I used to loathe the drop crotch. From Ann Demeulemeester and Rick Owens to Kris Van Assche for Dior Homme, the drop crotch has worked the catwalk at a number of menswear fashion shows. “What a dumbass shape,” I used to think. Skinny legs and a saggy middle? Who’s gonna wear that? When I showed one of my non-fashion friends pictures of drop crotches she said, “I mean, they look like a freaking diaper. They’re poo-poo pants!”

“But it’s fashion, so it’s fabulous,” I roared back.

Then last week I strolled into this hipster boutique (great prices) in Greenpoint, Brooklyn, and tried on my first pair of drop crotch. Mostly for Shits and Giggles. But ugh oh. From then on I’ve been a changed gay. So changed that the very next day I swooped into OAK, a hip boutique that’s like a tiny slice of heaven for people who can only see themselves in voluminous black clothes (me).

I get to OAK, am instantly ignored by the carefully hip, short, Maybe Lesbian with the asymmetrical white hair and pale blue lipstick. Look at all the clothes (black this, black that, black, black, black), then the Maybe Lesbian tells me they’re all sold out of the exact drop crotch I’m looking for. Of course the day I decide I want drop crotch pants, we’re all sold out. Okay, so now I’m really determined to leave this fucking store with a pair of kooky pants. I’m stomping down the stairs to the basement and finally I run into the perfect pants. Harem pants!

Tried them on. Fell in love. Walked around with them on. Studied self in the mirror. Thought about how to wear them. Wondered if I would wear them. Asked for opinions. Took pants off. Buy.

That’s right—I bought Harem pants. They’re black, obviously, and fall about a foot above my ankle (I’m short). The best part about them, though, is that they billow and fan out when I walk. It’s like having a personal fan blow under your legs. Think MC Hammer—without the gold lame. I’m like a freakin’ parachute ovahea.

It’s weird for me to be so into Harem pants because over the years my pants have actually gotten skinner and skinner. Who needs balls when you can wear skinny jeans? If I created some kind of Madison Moore Skinny-Jeans-O-Gram, you’d see that from about eighth grade to now I‘ve morphed from wide legs to boot cut until I finally discovered The Skinny (college).

My first pair of skinnies was the Levi’s brand “skinny,” size 29 x 30 in indigo blue. Love at first sight. I’d pop on a white v-neck, those jeans and a great pair of boots and feel super. It’s a classic, timeless outfit. So I strolled around all of New York thinking I was hip, hip, hip in my “skinny” jeans. But the thing is, I kept seeing dudes in jeans that were skinnier than mine, and that really started to piss me off. I don’t like to be outdone, so I set out to find jeans so tight they’d cut off the circulation in my man parts. Leggings, basically, which I’m cool with.

What I love about skinnies is the elegant silhouette: skinny pants elongate the legs, especially when you wear a Cuban heel or a Chelsea boot. And if you use that as the base of your outfit, it almost doesn’t matter what you put on top. The simplest, sexiest outfit for a guy or a girl is nothing more than a pair of skinny pants, a boot and a white v-neck or tank top.

Harem pants are a departure from my usual look, but they are so hot I couldn’t really pass them up. You know I’m one for drama, and these pants definitely pack a ton of that. I wore them to Condé Nast today, and it felt so funny to walk with all the Midtown Business Casual People and me in parachute pants, 67 rings, 113 necklaces, a v-neck, and a kid’s blazer. I felt just like Lady Gaga.