Some horrific, depressing and downright awful iterations of our favorite crime fighters. 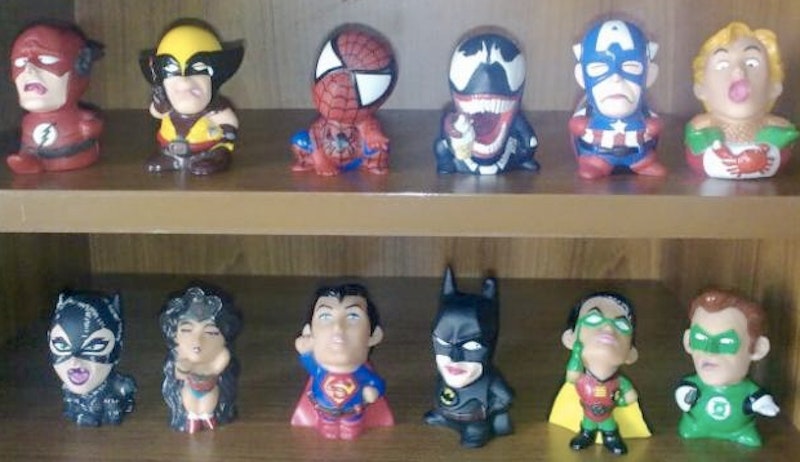 Grant Morrison kicks this off with Bruce’s mother lying on the ground dead, Bruce beside her, and Thomas Wayne standing over them muttering triumphantly. And if you need a scorecard to tell you who the characters are and what’s wrong with this picture, you’ve wandered into the wrong primal scene, jack. This is for people in the know, returning to their childhood toys as the super-patriarchs they used to pantomime, ritually defiling their dreams in the name of celebratory nostalgia and a simulacrum of naïve wonder gushing decadence and cyberpunk. Thomas Wayne is the evil daddy, the Joker is the evil daddy, and a guy with a pig face is an evil daddy. Gordon’s the good daddy and the old Robin’s the new Batman trying to take the place of a daddy for the new Robin who has issues. Frazer Irving’s stiff figures, waxy flesh tones and over-saturated colors give the whole thing the air of plastic surrealism; a perfect self-referential Freudian fugue with action figures taking the place of fathers. It’s not Thomas Wayne who’s your papa, Bruce, but the toy you got in your Happy Meal. Play with it till you get old and bored, cut off its head, and then declare loudly that it’s more profoundly entertaining than ever when it self-referentially sits there.

Marvel has ret-conned and alt-universed Spider-Man so many times it’s a wonder poor Peter Parker has enough brain cells left to pull his red tights out of the way when his nether web spinner incontinently dribbles. In theory this story is about an exact duplicate who’s replaced our favorite web-slinger, but I prefer to think that it’s just the same old Peter bashed one time too many in the head by the latest creative team and trying desperately to recover. There’s some strong evidence for my position—for example, “false” Peter references lines from old, old 1960s scripts (“Face it tiger, you’ve hit the jackpot”) which he could only know if the scripts were still shuttling about painfully through the hollowed-out shell of his continuity-addled cortex. Because writing a teen adventure melodrama with somnolent shout-outs to the wannabe-hip patois of 45 years ago—that would just be stupid, right? No, it’s much more likely that Stan Lee is actually a sentient self-replicating tapeworm that Bendis ingested with his morning Starbucks, and the Man has slowly been replacing his host’s tissues with slithering segments of hype and misattributions of co-authorship. Eventually the worm will grow so enormous that its tail will come thrashing bloodily out of Bendis’ forehead in a giant fountain of brain bits and achingly slow dialogue.

J. Michael Straczynski’s power fantasies are of the second kind. His Superman isn’t a hero; he’s an insufferably smug guidance counselor/guru, getting in touch with the real America by serving it a steady diet of flatulent koans and end-of-episode heartwarming morals. Don’t you wish you could dispense flatulent koans? Don’t you wish you could win arguments with a quiet wisdom indistinguishable from contempt? Don’t you wish you could walk on and on until you “run out of road”? If you do, could you please go off and write a self-help book or join the Peace Corps or go to the far north to join your fortunes with the wild lonely musk ox? Just don’t write comic books, okay? Because they will suck.