First they came for Pepe the Frog, now for Pepe Le Pew. 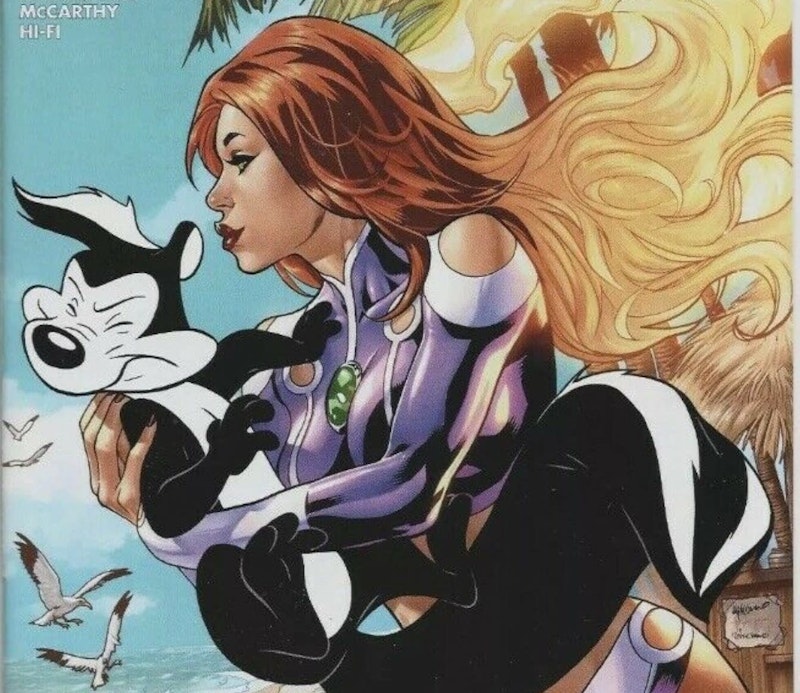 How embarrassing it must now be to be one of those smug liberal morons whose response for the past few years to all complaints about censorship or cancel culture was to say something sarcastic like, “I’m sorry you find tolerance so unpleasant” or “I really don’t think you’ll miss one or two racist cartoon characters.”

Since the current purge began sometime around 2013 (accelerating ever since), we’ve reached the point where the center-left/liberal establishment so rigidly polices which ethnic groups can interact with which at which times and in what manner that we ought to refer to such scolds unironically as “left-segregationists” (and so I shall from now on).

Catalan and Dutch translators, for instance, have just been rejected for the job of translating a black female’s poetry because they would purportedly be colonizing her culture (by making it accessible to new audiences).

By contrast, people like me—ostensibly the kind of evil white male capitalist all these woke efforts are supposed to be “educating”—are delighted by cultural cross-pollination and the chance it affords for people of all stripes to find new ways to make themselves and others happy. That was considered a legitimate goal not too long ago.

I hope those rumors about half-black American turned Brit turned American Meghan Markle planning to run for president as a Democrat are true, for instance. Even though I don’t vote and probably disagree with most of her political stances, it’d be great in a postmodernist way to see something akin to a fusion of the U.S. political system and the British monarchy achieved by way of international celebrity culture and a descendant of slaves, a couple of centuries after all of those things tended to intersect only in ways that led to bloodshed.

As a longtime fan of (and occasional participant in) comics and cartooning, too, I’m pained to see that while Dr. Seuss suddenly has detractors and defenders, few springing to his defense these days dare to make the broader argument in favor of all cartooning—and absolutely all art: namely, that exaggeration, personal impressions, subjective cultural filters, and occasional mockery are all part and parcel of art and shouldn’t just be assumed to be evil, dangerous, or even unfit for the eyes of children. Humanity can take it, unless we train ourselves to be cowards.

When people who are somewhat dissimilar meet for the first time, stupid as you may claim to find it, they often spend a little time saying things like, “Your hair is so red!” and “You are so tall!” This is not obviously immoral. I strongly suspect that most of humanity’s ancient lore about “tiny people” and “giants” simply sprang from taller tribes and shorter tribes meeting each other. Maybe this need not be an ethical big deal. Better if Atlas shrugs apathetically than if we try to erase his role in mythology out of anxiety over whether he will make people self-conscious about their stature.

The moral panic over stereotypical imagery in a few Seuss books—a panic that we were assured would lead only to the removal of a tiny handful of his works from future sales plans—has now reached the point that kids’ events built around his works are being canceled and Dynamite Comics is yanking covers they happened to have already had planned that parody Seuss. You can’t even do cartoons about cartoons about life now without some feeling it cuts too close to the bone and is all too, too real.

Meanwhile, if you’re a Disney+ subscriber—possibly one who hoped cancel culture at that company would claim no more victims than fired conservative actress Gina Carano—it’s time now to bid farewell to Dumbo, the Aristocats, and Peter Pan, each with its own dash of disrespectful imagery. It’s only a matter of time before some Gen Z political genius recommends pulling the whole original Star Wars trilogy from distribution because the rising generation understands, in a way that benighted Gen X and Boomers never can, that choking people to death with telekinesis is wrong.

This is the road some of us could plainly see the culture was headed down a few years ago while the left disingenuously claimed it just wanted to prevent Nazi imagery and pro-slavery statues from spreading. Back then, most people probably avoided commenting because the initial targets of left-wing ire were slavemasters or obscure, cryptic, possibly double-meaning-filled symbols such as the far-right-beloved cartoon character Pepe the Frog.

But now, over at Disney rival Warner Bros., another Pepe, Pepe Le Pew, is being cut from the imminent Space Jam sequel because feminists purportedly just noticed the skunk is a serial sexual harasser. That is and has been his whole schtick since he was introduced decades ago, always depicted as a menacing laughingstock—but to be safe, perhaps we should now assume it’s dangerous for kids to see male and female characters allowed to mingle in any gendered fashion. Don’t fool yourself that that solution would be deemed too drastic nowadays.

In their mania to fight what they construe as a new version of the Axis powers, constantly imagining they’re punching Nazis, today’s left-segregationists may end up, perhaps fittingly, having to complete the work their Democrat forebears FDR and Truman began—by renewing the effort to destroy Japan. After all, if impressionable young manga fans like the American woman in this video are allowed to see and enthuse about Japanese comics about breasts, it could lead to America exploiting Japan—no, wait, Japan exploiting America. No, wait, I mean, men exploiting—or in this case a woman reading about a woman… desiring women—but not quite for sexual purposes—or. Wait. What. How. So that means. Uh.

When in doubt about where your outrage should fall and who you’re heroically defending from whom, maybe just shut up and let people read and watch what they like and then sort it all out without your help. If you really want to police something, start by putting a wall between yourself and all of us who are sick of listening to your censorious, joy-killing, know-it-all bullshit.