Comic books linger in the imagination. 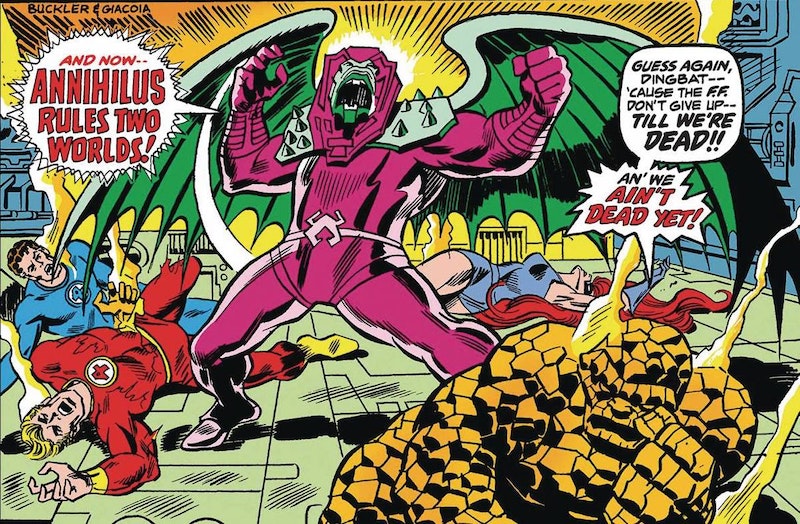 I hold in my hand Fantastic Four Annual #6—first appearance of Annihilus, and of Franklin Richards, son of Mr. Fantastic and the Invisible Woman. One extremely close to mint condition could command over $19,000; my copy, worn on the spine, looks to be in the low hundreds.

WandaVision inspired a look through my comic book collection, a few hundred plastic-bagged issues dating from the 1960s and 70s. I collected them, new or second-hand, over several years, stopping my Marvel acquisitions in the autumn of 1977 as I started seventh grade. In 1978, I moved on to Heavy Metal, “the adult illustrated fantasy magazine,” which had on a typical cover a laser-rifle-toting nude woman flying atop a gigantic bird.

Asked in elementary school to recite words I’d recently learned, I offered up “hex,” after some reading involving the Scarlet Witch, along with “hurl” and others gleaned from comic books. When a classmate pointed out where I’d gotten these, I affirmed it with aplomb. In junior high, my musical tastes intersected with my comic book interests for a time, as when Paul McCartney sang “Magneto and Titanium Man.” I bought Marvel Comics Super Special #1, in which Kiss confronts Doctor Doom. My copy’s cover has become detached, depressing the value. It says, “Printed in real KISS blood,” as some was claimed to have been mixed into the ink.

Certain images and characters from long-ago comic books stick in the mind, long after the surrounding narratives have become hazy. “ANNIHILUS RULES TWO WORLDS!” blared the supervillain as he battered the heroes on the cover of Fantastic Four #140. Annihilus was a humanoid of insect-like origins, winged, armored and bearing a powerful Cosmic Control Rod. He hailed from the Negative Zone, a bleak universe with antimatter and psychedelia, the latter reflecting audience interests in the 1960s when Stan Lee and Jack Kirby created the zone.

Annihilus repeatedly invaded the universe where the Fantastic Four and other heroes resided; what the readers might’ve loosely thought of as “our” universe, or the prime universe where the heroes resided, which Marvel eventually labeled Earth-616. The sometime-ruler of the Negative Zone wasn’t among the most powerful supervillains but was always striving to reach that top tier. “Here I am merely a giant, greater than most but not all. But soon the supreme power shall be mine,” Annihilus mulled during one incursion into Earth-616.

Comic books can resonate with one’s personal history in surprising ways. Ang Lee’s 1997 movie The Ice Storm featured some vignettes of Annihilus that connected to a story of family and relationship trouble in 1970s Connecticut. I watched it with a girlfriend with whom things soon went south, taking down our prior friendship and sending ripples of bad feelings into our interactions as co-workers many years afterward. A Negative Zone I did much to create.

In the 1990s, Marvel was a troubled company, strained by a long conflict between its shareholders and bondholders. That the firm had cultural capital of which better use could be made was clear, but this potential was uncharted. By the late-2000s, the company was developing the Marvel Cinematic Universe, or Earth-19999 as it’s called in the multiverse whereby the writers keep their stories straight; and Marvel’s 2009 acquisition by Disney enabled the MCU’s films and related properties to become vastly lucrative and high-profile.

Even so, since film rights to some characters have been held outside Disney, negotiations among companies have shaped which superheroes and villains can appear in the MCU and when. The Fantastic Four, the Silver Surfer and the X-Men are among those who may become part of the Earth-19999 continuity. WandaVision’s identification of Wanda Maximoff as the Scarlet Witch, with both new and classic costumes, was a similar result of corporate bargaining.

While the MCU draws on comic book storylines, its offerings are distinctive. WandaVision’s Agatha Harkness was notably younger-looking and nastier than the sorceress I remember from my old Fantastic Four comics, who served as protective governess of Franklin Richards and as an advisor once the child’s cosmic powers began to manifest. Among other valued deeds, the 1970s Harkness telepathically informed President Nixon that the threat from Galactus was over.

Perhaps the WandaVision Agatha will in time show similar usefulness, a possibility raised by her warning to Wanda, “You don’t know what you’ve unleashed,” a reference that some thought was to Mephisto, a devil I remember well from my childhood readings, but which perhaps more plausibly pointed to Chthon, the demonic Elder God creator of the Darkhold book of magic, which Wanda was reading through astral projection at series’ end when she heard the sound of her departed children calling for help from some unknown dimension.