Brick Houses in the Hollywood Hills

Dissonance with Parasite’s Oscars success and its anti-capitalist themes isn’t hard to resolve. 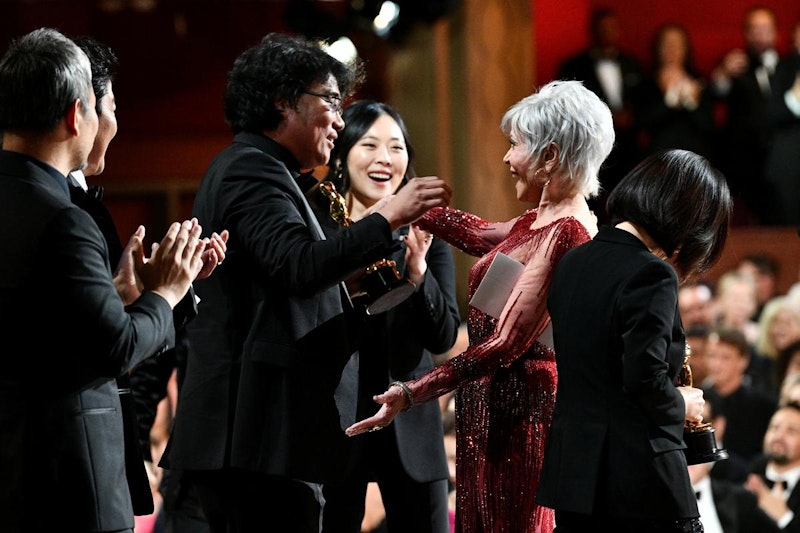 Bong Joon-ho’s Parasite is the first Best Picture winner at the Academy Awards in a language other than English. I bet against it, and its writer/director, because I didn’t think Hollywood would award a movie it had absolutely nothing to do with. The Artist, 2011’s winner, was a largely silent movie produced in France, but distributed and pushed hard in America by The Weinstein Company. Similarly, last year’s Roma had a decent shot at Best Picture and did win several awards, but this was easier to see: Alfonso Cuarón has been familiar to Hollywood for nearly two decades, and while there’s some Netflix resentment remains, it’s still an American company. A Hollywood company.

What was so mystifying about Parasite’s success at the Oscars was how obviously beloved it was by the crowd. How can the irony of that be lost by anyone who actually saw it? In an opening bit by Steve Martin and Chris Rock, they chided Jeff Bezos, in attendance and beaming, about his obscene wealth and messy divorce. But no one stuck the knife in: the hardest anyone hit Bezos was a weak jab by Rock: “This guy got divorced and he’s STILL the richest person in the world!” The writers’ room must’ve been seething. Josh Gad, introducing a performance by Idina Menzel, said that Canada is just like us, “but with healthcare.”

Brad Pitt was the first winner of the night, and even he succumbed to the limpest of protest: “I know I only have 45 seconds up here, but that’s more time than the Senate gave John Bolton this week.” Cue an applause break for John Bolton. Is it still surprising that this crowd was able to enjoy Parasite without seeing or understanding what it was about?

Maybe because the critique is in plain sight and the movie doesn’t dwell on it: it’s easy to see how those who didn’t come from money, and even those who did, could relate to the poor family in Parasite. It’s a very familiar underdog story, so Hollywood celebrating it despite its obvious anti-capitalist message isn’t as strange as it may seem. I mean, these are the same people that think feminism means embroidering the names of every female director who wasn’t nominated this year into a Dior dress. Natalie Portman did just that, and man, what a beautiful expression of solidarity. I’m sure Joanna Hogg and Greta Gerwig were thrilled.

“I don’t get why this crowd cheers so hard for Parasite, do they think it’s not about them?” Probably not. A cartoon by Jeff Stahler had an elderly couple leaving a theater showing Parasite, with the man saying: “A family of con artists lie their way into the house pretending to be something they’re not... sound familiar?” I didn’t think Parasite was open to interpretation, it’s pretty cut and dry, but this is unbelievable. It’s a testament to how many Americans are blind to class politics, so much so that they can't even recognize them when they appear. Joker had a much messier take on the same issue (rich vs. poor), but it was never going to win any major award other than Best Actor because in Hollywood, the alt-right associations with Joker make it haram, even if the film itself has none of the incel/mass shooter inspiration that the media tried very hard to force onto it. Parasite was a much easier film to swallow, despite also being intensely violent and ruthless in its critique of capital. I thought it was impossible to miss.

American Factory, produced by Barack and Michelle Obama, won Best Documentary. Director Julia Reichert implored, “Workers of the world, unite” in her speech: cue prefab Fox News freakouts and alarm from victims of the USSR. No need to worry: the Obamas would never endorse, much less produce, something left-wing. Reichert quoting Marx and Engels at the Oscars does nothing for leftism. Joe Rogan endorsing Bernie Sanders did more for progressive and leftist politics in America than any statement at the Oscars or on Saturday Night Live, where Larry David still plays Sanders in broad caricature as the cranky and stubborn Jew. (I can’t say David has been reduced to this, he doesn’t strike me as someone who’d ever participate in something that went against his beliefs. But does he have an alternative?)

Elton John reacted to his award like Rush Limbaugh did to his Medal of Freedom last week: mouth agape with faux surprise. John performed at Limbaugh’s wedding, as if there were any doubt about their shared affinity: money. Homophobia vanishes in the hills of Malibu at sunset, with an infinite spread, unlimited bar, and everything the rich family in Parasite represented: the height of visible humanity.

Obama had two jobs: being the President, and being the first black President. He could’ve de-escalated our wars in the Middle East, prevented tanks from descending on Ferguson and Baltimore, made much more hay about the Panama Papers, and he could’ve told that cop from the “Beer Summit” to fuck off. But he didn’t, because he couldn’t. He had to be the first black President, and he did a great job. Zero scandals, charismatic, inspiring, and the new ideal of the President as performance, replacing Ronald Reagan, who was preceded by JFK, and so on. It also shouldn't be understated that Elton John was the first openly gay popstar in America, and since getting sober in 1990, he's followed a similarly safe and measured path as a public figure: this is a man that wants to be a role model, but only in the most literal sense.

Parasite is not a cinematic Molotov cocktail, even if its ideology is obvious. Rich, out of touch Hollywood liberals and conservatives can connect with a familiar form (David & Goliath, rich & poor), and recognize that this is a movie of the moment without picking up on the big picture diagnosis. Parasite is full of uniquely late-2010s imagery and situations: searching for Wi-Fi, severe wealth inequality, obscene luxury so over the top it’s self-parody, precarity workers, the gig economy, and fussy parents looking for just the right tutor to make sure their kids are the best ever in everything. A multimillionaire like Obama can list Bong Joon-ho’s anti-capitalist indictment as one of his favorite movies of 2019 because it makes its case politely. Joker, Uncut Gems, and The Irishman were also about capitalism and the absence of a powerful labor movement in America, but they made their case in messy, aggressive, challenging ways: these are bombs. Parasite is a very good film, but not revolutionary. Hollywood’s tokenized embrace of the film isn’t that hard to square.