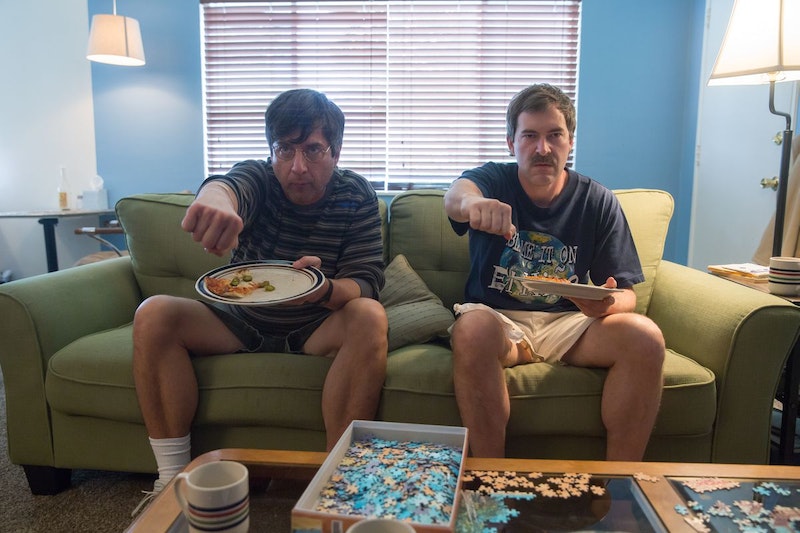 “So it’s, it’s, it’s… it’s that,” says Michael (Andy Duplass). “The dying part is… eh. It’s eh. Hospital, the tubes, and bloating and that, that… I don’t want any part of that.” He has stomach cancer and he figures he’ll check out. Before things turn ugly he’ll take the pamphlet the doctors gave him, go to the pharmacist for the pills, and lie down on his bed and die. His buddy feels otherwise. “Do, I mean, do what… yu- yu- you can’t give up,” Andy (Roy Romano) says. The two of them talk like dead socks and they live in a bleak armpit of Santa Barbara where California keeps its empty parking lots and middle-aged bachelors. When they were at the doctor’s office, getting their first installment of the bad news, the doctor wanted to know what connection Andy had with the patient. “We’re neighbors,” Andy said helplessly. “I live on top of him.” They know each other because of housing arrangements.

They have nobody else and they love each other. Not in a gay way, of course. The director (Mark Lehmann) and screenwriters (Lehmann and Duplass) have something trickier in mind. Paddleton may be the first art film made by Netflix, and certainly the first starring Roy Romano and the guy from The League. Some art films have a message, others are studies. Paddleton is a study of love finding a way. Reduce human life to the nub; its elements will still be there. Art films from hard-up nations may show the human spark surviving despite hunger or filth. This movie shows us life savagely stripped in another way. Remove everything that raises life above the level of sweat pants and some tilted book cases with DVDs. What do you have? Two souls who find something in each other that they care about. Now one of them is going to die, and his friend has to help him do so.

Andy flails and Michael girds himself. If they were indeed a couple, it would have to be noted that Andy, who lives on top, would be the flummoxed, raging husband, and Michael the wanly serene wife on a deathbed. As it is, they’re two schlubs encountering mortality. Paddleton is too long and it doesn’t take a lot of chances beyond the premise—of course, the buddies share a pop culture enthusiasm (in this case Fist of Death) that helps the script display their bond. Remarkably, the film even gives Andy a gorgeous love interest; this is at the end, when a single mom moves into Michael’s old place. She’s played by Marguerite Moreau, who’s 20 years younger than Romano. Even so the movie sets out to do something small and difficult, something delicate, and the attempt succeeds. A long list of things go right. Acting, settings and decor, dialogue, direction, costumes, and score all hit their targets.

Paddleton is named for a game that the fellows made up. With their tennis rackets but no court, they improvised something from a barrel and the back of a corroded drive-in theater. Some of us think life is kind of like that, and Paddleton suits us.