Dan Gilroy has created a strange masterpiece with Velvet Buzzsaw. 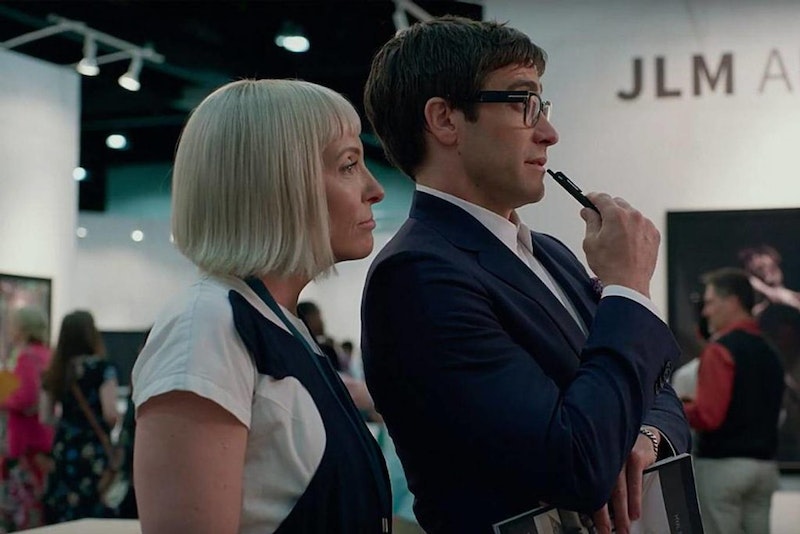 Who determines what is or isn't art? Who determines what should be good or bad art? In some ways, every artist (no matter what the form) hates the critic. Some don't even read the reviews of their work but a bad review can destroy an artist.

There have been many explorations of this strange relationship between the artist and the critic but a new film on Netflix, Velvet Buzzsaw, takes an entirely different and surprising approach to it. Written and directed by Dan Gilroy, Velvet Buzzsaw centers on the world of high-class art critics and gallery owners. Jake Gyllenhaal plays Morf Vanderwalt, a snobby art critic who has no qualms destroying the career of an artist by calling his work that nastiest of words: derivative.

Gyllenhaal portrays Morf as an over-the-top critic, possibly gay, possibly bisexual. He's a bit confused but hey, all’s fluid in the art world, including sexuality. He has all the accoutrements of an art critic: black, thick eyeglass frames, creased pants, perfectly coiffed hair.

Joining Gyllenhaal in this art menagerie is Rhodora Haze, played by Rene Russo. Haze is a former punk chick who was a member of a band called Velvet Buzzsaw but she’s an older woman now and has abandoned her punk roots and become a gallery owner interested in making a lot of money by representing certain artists. Whether Haze has any love for art is never made clear but it doesn't present an impediment to either understanding her character or her place in the story.

All is well in this superficial world of Los Angeles art until Josephina (Zawe Ashton), Rhodora's associate, discovers an apartment full of (mostly) finished paintings. A deceased man named Ventril Dease created the neglected and unknown art. Josephina is taken by his paintings but not for reasons of beauty but for the possibility of becoming famous for representing a dead artist. With fame, naturally, comes money.

The problem is that Dease happens to be a lunatic who murdered his own father and wanted his paintings destroyed after his death. The plot is fairly simple: Dease's paintings are haunted and because Morf, Rhodora, Josephina, and another associate, Gretchen (Toni Collette) want a piece of the canvas pie, they unleash the wrath of Dease's haunted spirit. There’s no exit out of these nightmarish images of eyeless children and screaming faces and the only certainty is death.

Gilroy has created a strange masterpiece. The names of the characters (and their affected behavior) are enough to make one laugh at the ridiculousness and uselessness of snobby art critics. But once the viewer gets comfortable in the satire as well as the uncovering of the mysterious life of Ventril Dease, Gilroy breaks the mold and brings in another color palette entirely. He sprays the screen with forms and motifs only found in cheesy slasher B-movies and this is what makes this film funny and brilliant.

Arms get chopped off, robots kill, tattoos come alive, and there’s plenty of blood splattered all over the clean white space of the art gallery that the patrons ignore because they think it's part of an exhibit. Gilroy brings out the supernatural and the corny to kill the critics and cheap inauthentic purveyors of art. There’s something hilarious and satisfying in watching the alleged high art of snobs destroyed by the low-art expression only found in a B-movie. I cheered at the annihilation of fakeness. But despite the seemingly unserious treatment of the art world, the cast still brings a sense of character depth. There are occasional glimpses that there might be something more in the souls of these inauthentic phonies. I was particularly impressed by Russo's performance, in which she brings out pains, pleasures, and perhaps even regrets only a former punk goddess can feel.

This is a film made by someone who knows art and isn’t dismissive of it. Dease's paintings (which are, I assume, made by a variety of artists as end credits indicate) are not simplistic. They evoke works of Lucian Freud, Francis Bacon, and contain elements of Daumier and Goya. The disorder and chaos of the mind is visible and it's treated with the respect it deserves.

In the sea of plastic smiles and air kisses, perhaps the only authentically honest character is Piers, an artist who’s lost his inspiration to paint especially since he quit drinking. He’s played brilliantly by John Malkovich. In one instant, Malkovich pokes fun at his character (even himself, a la Being John Malkovich). In another moment, he takes it all very seriously, and the viewer’s convinced.

Gilroy's aim isn’t to destroy art itself. Rather, it’s to destroy the categories through which we view art. Is there any power in the critique itself and does it matter what the critic thinks? Whatever the final word on the nature of critique may be, I thoroughly enjoyed Gilroy’s film.