No Shame in the 21st Century

A look at Big Mouth. 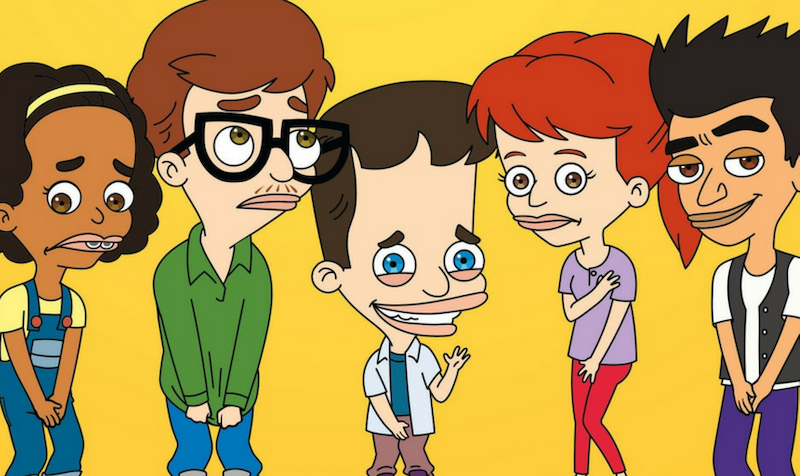 Why is it called Big Mouth? Hard to say. The characters’ mouths are drawn large, especially the kids’, and various people get in trouble here and there for yapping out secrets. But the characters on the Netflix sitcom get in trouble for all sorts of things. For instance, Missy (voiced by Jenny Slate) humiliates herself by sleepily humping her favorite snuggle toy while on a field trip. Andrew (voiced by John Mulaney) goes through an emotional odyssey because his dick gets hard during a trailer for Dwayne “The Rock” Johnson. Nick (voiced by Nick Kroll) finds that he and his pal Jessi (voiced by Jessi Klein) don’t want to be a couple, but they do take some edibles for the first time, after which Nick’s big brother has to get him home from the emergency room. In other words, the problems that hit the characters tend to involve being 12 or 13 and getting rolled by life and its oncoming new phase. “Big Changes” would have been a good title; the show’s song is even called “Changes.” But no. Big Mouth.

Now preparing its third season, Big Mouth is comedy animation done by showbiz people who think they’re smart. It’s the kind of show where a credit says “Scallops (voice)… Jon Hamm.” Voice cameos are all over the place, and often enough they belong to a talking bathmat or somebody’s pit bull. Everything speaks up at one point or another, except possibly the tables. (All right, this can be a reason for why it’s called Big Mouth, but I bet they didn’t think of that.) The humans are surrounded. Allegories are always popping up around them, and enactments of wet dreams and states of mind. This playground is governed by an esprit ludique that darts between the given and the unreal, dodging physical limits to hoot out its commentary on the human plight. All right, that’s how it is with cartoons, but here it’s more so. Kristen Wiig is the voice of Jessi’s vagina.

Very often the show’s funny, and the stories work too. The characters are well-written and well-voiced. Nick Kroll, one of the show’s four creators and its star, is droll as a smooth little charmer who’s learning not to be a shit. John Mulaney as Andrew, the star’s pal, captures the sense of helpless, knock-kneed rampaging the poor dork projects. The voice is built on a sort of gulp or swallow, one that creates a lower resonance Maloney doesn’t use in his act. The downside of the technique is that sometimes the character sounds like Phil Silvers in a jam. The upside is that Andrew has a certain body to his voice even while he wobbles all over the place.

Maya Rudolph, one of many medium or big names popping up here, has the show’s standout performance as the Hormone Monstress. Every line is an aria of honey-pie inflections; the voice thickens into a purr, climbs into a roar. It’s bravura work and done with skill. I found it a bit much, after a while. The Hormone Monstress, face and voice, demands a response and she’s there a lot. Missy Forman-Greenwald, voiced by Jenny Slate, is a gentler experience. This giddy, candid soul talks in a way that makes you want to find something and pat its head. The little guy’s happy to be alive, and she’s a nerd who loves science and humping her snuggle toy.

Missy learns to accept herself and her urges, since a show with a talking vagina—that is, a friendly talking vagina—will lean in that direction. In fact, everybody on the show learns. On the same field trip where Missy’s embarrassed, she and everyone else free themselves by banishing the spirit of shame, who’s called the Shame Wizard (David Thewlis, with some very nice turns). They hoot him out of the place and everybody capers about in a jamboree of let-down hair. Mass events of this sort dot the series. Consider the body-acceptance musical number: ranks of unclad women, all different shapes and sizes, sing their self-acceptance together. Or Jessi’s bas mitzvah, where everybody, young and old, joins in a number called “Life Is a Fucked-Up Mess” while shouting out formerly private reasons for thinking so.

Sitcoms used to practice learning and hugging, but Big Mouth is on to a new phase: learning accomplished by means of a mass splooge in which everybody gets their psyches right. The lady at Vulture says the show ought to get a Peabody Award. Maybe the scallops can tell us.