Biggest lesson learned from traveling: Europe’s problems are equivalent to America’s, and we should stop trying to be something we’re not. 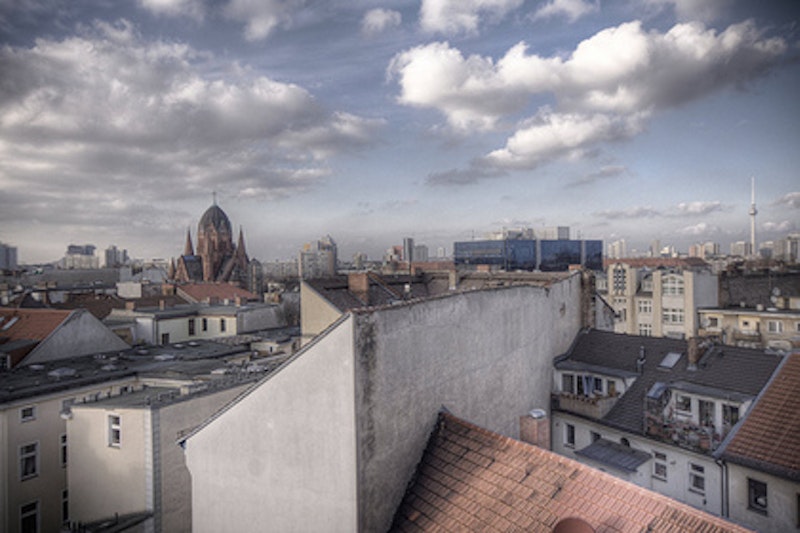 "Berlin Over the Top" photograph by extranoise

PRAGUE - Germans are fucking huge. It's really quite jarring. As Americans, we are a slightly above average people when it comes to height and general size. I am almost perfectly average sized: 5'10", 170 pounds, pretty average shoulders. In most countries I've been to, this puts me on the upper end of the average spectrum. German people look like normal people that were enlarged with some sort of ray gun.

I wear a size-nine shoe, admittedly on the smaller side of average for Americans. But while searching for a new pair of sandals in Berlin, I had to endure the moderate humiliation of the saleswoman grabbing my shoe size from the women's rack.

What's particularly creepy about the imposing size of the German people—seriously, it's like being Gulliver in Brobdingnag—is the fact that they are some of the gentlest people on earth. Berlin was jam-packed with weird hippies and annoying pacifist protesters. Germany just feels like a place where people love recycling—and they do cherish their recycling, there are recycling bins everywhere. No argument from this quarter about protecting the environment, but their projected image of gung-ho worldliness betrays a country that is terrified of forming a strong national identity or being controversial. Honestly, this is probably the right way for them to be going about it.

In Israel, it was strange to see random bits of destruction in a first world nation. Every so often there were places where you'd see destroyed buildings or bombed-out cars or burned military equipment. This reminds you of the perpetual war. Berlin reminds you of its violent past in an unsettling way. You can still see the bullet holes on the Victory Column in Berlin and a few random buildings throughout the city, but the destruction appears gone. The whole city was destroyed. The whole city has been rebuilt. Everything in the city is only 50 years old.

The lasting effect of war in Berlin is not visual; it's more intangible. Massive futuristic-looking TV towers are permanent reminders of the communist pasts in Berlin and Prague, but the Nazi past is different, embedded in the people rather than the landscape. The city feels awkwardly new. The people, united only 18 years ago, seem completely unsure of what it means to be a Berliner and how much of their German heritage they're allowed to embrace. Being in Prague, a city virtually unperturbed by World War II, provides the feel of mythical Old Europe, a place that has been around for centuries. Berlin looks old in some places, but it isn't, and you can tell that isn't. I've been to malls that feel more vintage than Berlin.

Sometimes we forget how monumental Europe’s 20th-century troubles really were. If I had grown up in the Berlin neighborhood my hostel was in or here in Prague, I would have lived under communist rule. There possibly would have been a secret police file on me from my preschool. There definitely would have been files about my parents. My grandparents would have lived through concentration camps or hiding during Nazi rule.

Today, people view Europe as the center of cosmopolitan thought and culture for the world. Its cities are revered and toured by the entire world. It feels like there are more Japanese tourists in Prague, Florence and Berlin than in their American counterparts—and America is closer to Japan. We've won the low culture battle, easily. Our fast food and pop music are ubiquitous. Hearing Beyoncé blasting from a snack stand in the middle of a park in Prague would probably feel weirder if the same song hadn't blasted in Tel Aviv, Athens, and Berlin. Throwing a rock from this Internet cafe would hit not one, but two McDonald's. Indiana Jones posters are everywhere.

But what about the other stuff like literature, political theory, theater, journalism, or international relations models? America excels at these things—with the possible exception of international relations right now—but they're sort of absent here. I can't figure out why everyone loves our Coca-Cola but claims we have no culture. It seems like people aren't aware of high-minded America and want to focus only on the cheap shit.

Some people you talk to are pretty excited to meet an American, especially in Prague where we're a little bit more exotic. At a club last night, a Czech student was so energized about talking with my friends and me that he stole my seat at the table as soon as I stood up. The worst response you get is usually indifference. That is, until you meet the societal elites.

Vacationing Dutch teenagers, souvenir shop owners looking to rip you off, kids out partying: these are the people that have no problem with or even enjoy Americans. These are the people that fill the McDonald's—which are always packed no matter the time of day—and buy the new 50 Cent album. Then there are people like the Israeli-German biologist I spoke with on the train ride to Prague. His insults to America seemed ripped from the pages of newspapers publishing stories about how much everyone else hates us.

This pretentious fellow tried to explain why English English was a better language than American English (apparently, they're different languages now). He referred to America as "The Bad Guys." He blamed America for global warming. He had seen how poor America's transit system was during his business trips to those bastions of urban development Phoenix and Minneapolis. But he also said something that kind of creeped me out: he said he liked almost all of the Americans he'd met.

Now, Americans he'd met fell into two categories: fellow biologists and travelers like me. He may have treated me with an air of condescending disdain, but that's just who he was. I think he liked me. This is what makes me uncomfortable.

We spoke about the "Two Americas," that dreaded beast lurking since our country's inception, made real by the Civil War, brought to the front pages during Vietnam, preyed upon by people like Nixon and George W. Bush, and now an annoying repetitive buzzword in political coverage. I hate the idea of Two Americas almost as much as being put into one of them. And this weird dude who I just met instantly put me into one of the Americas.

I'm traveling abroad. I'm Jewish. I didn't vote for George W. Bush. I think we should do something about the environment and mass transit. I'm from the East Coast. To him, these things were all immediate indicators that I'm part of what he would probably call "Good America." And he expected me to play the part. He talked about the Midwest—where I went to school and a part of the country I love—and all people who voted for Bush as if they were devils. He talked about a mass of uncultured, fundamentalist, untraveled, stupid people that in his opinion were hijacking the world with their votes for Bush. And he talked about is if he assumed I would agree with him. He assumed this because all the other Americans he had met did agree with him.

What's wrong with us? I hate both Americas because I love America. There is only one, people! When you see something like the bullet holes in Berlin, it reminds you that Europe—the same place that is now seen as the benchmark for human decency and worldly thought—plunged itself into the most destructive war ever a mere 70 years ago. Our American generation, this generation, needs to realize this. Our scars, while sometimes deep, are not as cruel and painful as the scars here in Europe, so stop putting Europe up on a pedestal. I don't care if England's gun ban worked magic; England is not America. We need to come to grips with this and find American solutions to American problems.

We can do it. The first step to overcoming the divide is easy: realize that it doesn't exist. This is obviously really difficult. Sometimes the Northeastern sense of superiority annoys me. Sometimes Midwestern isolation annoys me. Sometimes excessive Southern pride annoys me. Sometimes West Coast nonchalance annoys me. The thing is, I've been to all these places. Go to them yourself. You'll realize that people are really a lot like you. People in New York need to stop pretending that the rest of the country doesn't exist and it's nothing like them. People in the middle of Michigan need to stop pretending that New York is another country and the people there are nothing like them. Go see it. And if you've never been to New York, shame on you, it's one of the best—if not the best—city in the world. That's coming from someone who secretly resents this fact and hates the Yankees.

There are no steps after step one. It's fine to think that people in one region of the country are annoying. The problems arise when we start thinking of them is living in a different country. No, we are not exactly the same. But we are Americans. Whether you're from Georgia or California, your passport says U.S.A. When you go abroad, you will be an American. If someone asks where you're from, you will say "The States" not "The South." If we can just get over this pigeonholing stereotype, then we can actually start talking about productive things.

Then, maybe with a little time, people will realize that all Americans are sweet because we are. We have more fun than any other people I've met—save Australians, but they destroy stuff and are really disrespectful. My friends and I were playing Rock, Paper, Scissors on a metro train in Athens, and the whole car was staring at us and laughing. They thought we were neat. We are neat. We just need to remember that together from time to time.