In which our revered columnist hypothesizes that a government conspiracy lurks behind our country's incremental stamp price increase. 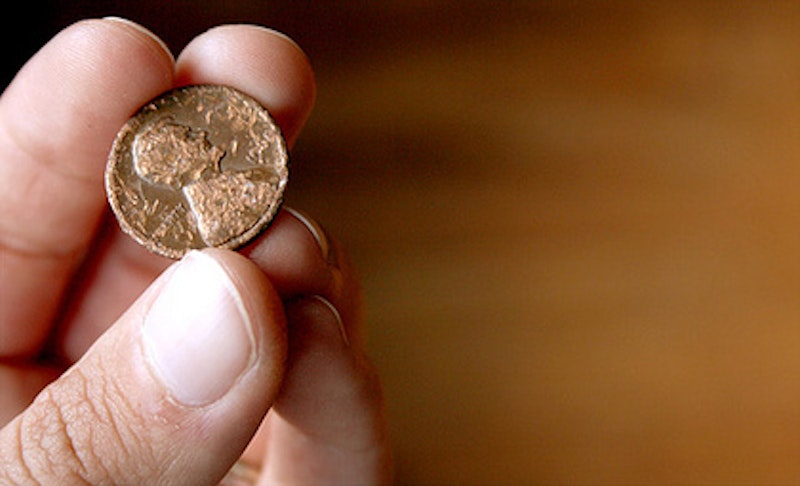 "Penny From Heaven (Day 11)" by Caitlinator

I heard they (and you know who They are) were talking about getting rid of pennies, the one-cents, the one-hundreths of a dollar. Personally, I am all for this, because all I do with pennies is put 'em in a big plastic pretzel jar and then when the pretzel jar is all full and too heavy to carry, I carry it to the supermarket and dump all the pennies into one of those Coinstar® machines, and the fucking robot charges me like, eight cents on the dollar and gives me a piece of paper I use to go and make groceries. I suppose I could go and try to pay for my groceries with all the pennies, but who wants to be in that line behind me, eh? "Two-hundred-thirty-six, two-hundred thir--I'm hurrying! Quit telling me to go faster or you'll make me lose count! No, you go to hell, this is legal U.S. Government Money and I can spend it any way I want! Fuck! See what you did? OK, one, two. . . "

So like, I'm looking at my penny-storage and labor costs and transportation to the Coinstar® and shit, and I'm getting robbed, Return-On-Investmentwise, so fuck yeah, let's get rid of the penny, and while we're at it, the nickel and maybe even the dime, too, man.

Or let's at least make the nickel smaller than the dime, you know? How did we end up with the cheaper coin being bigger? The fucking dime is also smaller than the penny, right? This is the kind of stuff that bothers me. Also, the penny gets dirtier than any of the other coins, and if you have a big pile of them, like possibly in a big plastic pretzel jar, just saying, don't ever go, like, just out of curiosity, stick your face inside the jar and sniff the pennies, because the smell is kind of unpleasant, like an old wet basement full of dirty hands and rusty metallic pocket-lint. Also: Pennies don't taste good.

Anyway, what got me thinking about all the dirty-smelly pennies out there (and in my plastic pretzel jar and in a nasty-scuzzy coffee mug on my desk) was when I heard about how they (same people) just jacked up the price of a Postage Stamp. Guess how much? Yes, one cent. Fucking conspiracy. One lousy teensy cent. Now it's like 42 cents to mail a letter. What the fuck? What kind of small thinking is this? Let's just get out ahead of this shit and round it up to an even half dollar, so we're not always changing the stamps, huh? But no, they gotta raise it one cent, and then they're like, "hey, don't get mad about the stamps going up, check out these new 'Forever stamps' which will always be good to mail a letter." Right, so now instead of people hoarding a penny at a time of a piece of metal that's worth more than a penny, you're gonna try and trick us into hoarding pieces of worthless paper at 42 cents a pop?

I think what they oughta do is just take a l'il break, you know? Stop making more pennies for a few years, and then like, if pennies are so great and need to be all in the money, then the losers who squirrel 'em away and never cash 'em in might be forced to release them back into their native environment, via peer pressure or something. Of course, not making more pennies will probably encourage boneheads to start hoarding them even harder, but either way, eventually the penny will be extinct. Mwahahaa! Fuck the penny, man, seriously. I heard some guy was melting tons of 'em because it is worth more than one cent, intrinsically or whatever, so you could melt a bunch of pennies and sell the metal and earn a living, I guess. But you can't anymore, melt the pennies, or the nickels, even.

The thing is, that's probably why we'll never get rid of the pennies, because the Government makes 'em and then people either stash 'em or vacuum 'em up outta their cars after the fucking things fall out onto the floorboards and they never get cashed in for goods & services so that's like lending the government money a penny at a time for hundreds of years! I think.

I have never killed a penny by vacuuming it out of my car, even though I am skeeved out by what happens to the pennies that get stuck under my seat with like, a random fragment of french fry or beef jerky product along with some sticky soft-drink pre-slime from the latest misalignment between my cup holder and the stupid 20-ounce bottle of Coca-Cola or the incorrect "Gulp" size of cup from the 7-Eleven that doesn't quite fit right or is too tall so now I'm holding the Double Gulp® between my legs and when I take a corner I get the cola-juice all seeping into the seat and carpeted floormats of my Honda Civic and then there's always like, a few escaped pennies that fall outta my pants-pocket and are all up in between the rubber part on the back of the floormat and what's left of the rug on the floorboards and they get marinated in cola-spooge for a few months until I go to the car wash to vaccuum up all the toothpicks and fortune-cookie fortunes outta my car and there's these crusted-over one centses and I wanna throw 'em away, but it's like real money, you know? I gotta go wash some pennies.