Splice's new column debuts with a meditation on disappointment. 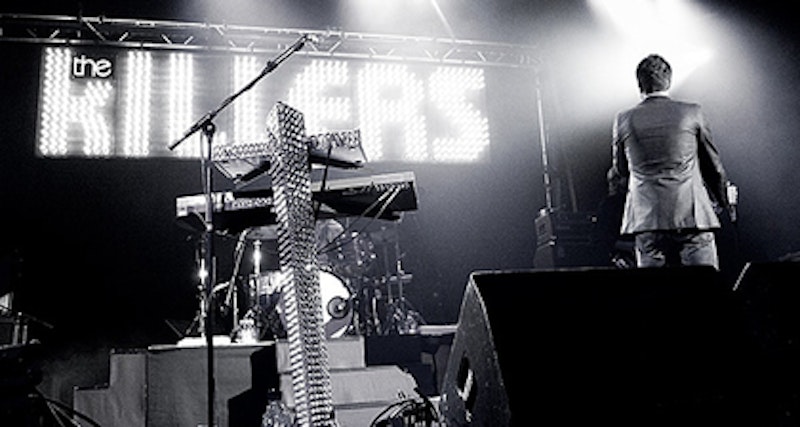 The Killers’ second album, Sam’s Town, is my least favorite of all time. In fact, it could be my least favorite piece of art—including books, paintings, films and David Crosby’s mustache—though I would have to re-watch American Pie: The Naked Mile to be 100 percent sure.

I have a confession: I’m one of those annoying people who listen to the same music as you, but I’m most likely listening to it about five months before you are. I bought Hot Fuss, The Killers’ debut, in its first week—before anyone had ever heard them outside of Elton John. When one of these acts that I’ve “discovered” takes off, I am naturally thrilled. I feel a special attachment to the band that can only come to someone whose ego sometimes thrives vicariously through the success of strangers.

Yet, The Killers were a special case. Aside from propping up my fragile ego, they had something else, something that I find myself constantly measuring and searching for: potential. I thought that The Killers had a sound and an attitude that would allow them to release a true masterpiece in the future.

Upon buying Sam’s Town—the first day it came out, naturally—I popped it into my car’s CD player and prepared for a lovely afternoon excursion. I drove around for the 44 minutes and 14 seconds it took to listen to the whole thing. When I pulled into my driveway, I took the CD out of the player, put it back in its case, put the case in the pocket behind my chair and refused to listen to The Killers for over a year. I didn’t even put the CD on my iTunes. It was awful. It was a step in the wrong direction. It was a crappy Bruce Springsteen rip-off.

Disappointment is one of the most jarring emotions in the spectrum of human existence. Disappointment is why—aside from Kevin Costner and the rhyming—Shoeless Joe Jackson and the phrase “Say it ain’t so, Joe,” still conjure up such powerful images. We hurt for that adorable, disillusioned child looking at his cheating idol in the eyes.

But what a strange hurt it is. Disappointment isn’t destruction or even a pure form of failure. It is simply when your expectations aren’t met. It could even be construed as miscommunication. The cookies aren’t as tasty as they looked. Your evening plans didn’t work out. These aren’t bad things that happened. These are good things that didn’t happen as planned.

I hated watching Michael Vick go to jail. I am both a dog owner and dog lover. I am not really a fan of Vick or the Atlanta Falcons. But the fan in me—not just the football fan, but also the fan of potential greatness—felt betrayed. When Vick stepped behind bars, he robbed from all of us a legitimate chance to view something special, something to tell the grandkids about.

My nostalgic pain for lost opportunity isn’t simply tied to the what-ifs surrounding athletes or musicians I don’t know personally. Oddly, while reflecting on such disappointment, a quote that I couldn’t place—I eventually looked it up, and it’s from the film Adaptation—kept surfacing in my thoughts: “You are what you love, not what loves you.” I couldn’t help but ask the gatekeeper of my thoughts if he had started drinking on the job.

Disappointment may be an odd bird in the emotion world, but—like any hurt—you begin to search for ways to protect yourself from it. You figure out prevention methods. My method has become simply pessimism. If my method had a seventh grade health class equivalent, it would be abstinence. I’ve found that the safest way to prevent disappointment is by avoiding any hint of positive thought or expectations. At least that’s the lie I like to tell myself.

See, within each pessimist lurks something much more unsettling: a fatalistic dreamer. The combination of submission to doom and undeterred hope shakes my soul. I fear success but pray for it. It’s a very American paranoia. In a society that glorifies victory through unfettered competition, you must be the best. That may sound like an indictment, but it’s not, I subscribe to the same set of morals. I hold myself to a higher standard than I may ever be able to achieve. I revel in the American-ness of this self-fulfilling prophecy. It drives me to be something special. This isn’t normal. Most nations don’t want you to be special, but in America, we crave it. I’m no different.

My ego, massive as I like to pretend it is, yields to the power of self-doubt when it comes to success. I know I have greatness in me. Right? I have to have greatness. I have to be special. I’ve always done well, haven’t I? But what if I don’t? Maybe I’ll sabotage myself a little bit. If I haven’t put forth my fullest effort, then I’ll know that I have the ace up my sleeve. If I don’t succeed it isn’t because I’m not capable, it’s because I didn’t try hard enough, and that’s eminently fixable.

Fuck that. The virus of slight underachieving is my greatest enemy. You aren’t what you love. You are what you fear. Familiarity doesn’t breed contempt, it breeds unease. What haunts me most in others haunts me most in myself. My only relief is that when I see The Killers or Michael Vick, I don’t see myself. I only see one path that I could go down. Fear of being like them, being something I couldn’t live with, is the one thing that keeps me working toward fulfilling my own potential, whatever the hell that may be. And you know what? Sam’s Town isn’t even that bad. I’ll never forgive the band and still hate the album, but at least I’ve come to terms with it.