Prince's re-photographs present American consumerism and celebrity culture as both a topic and a technique. From The Minnesota Daily. 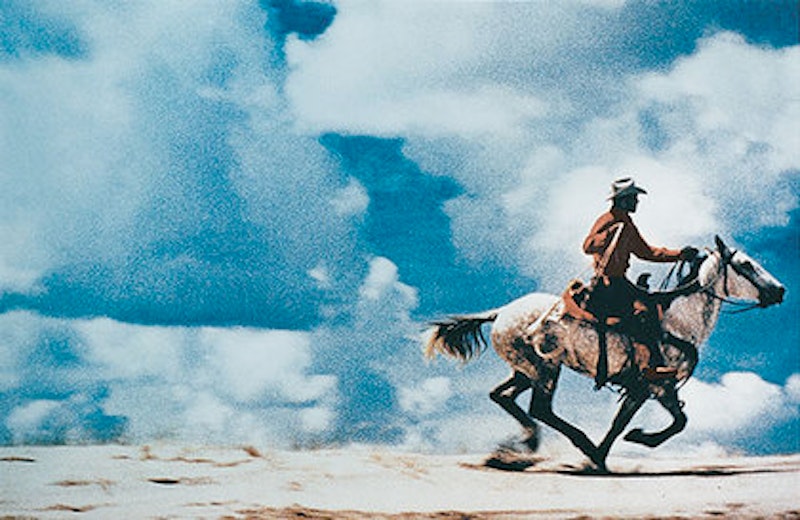 For a long time, Richard Prince was hidden in the artist's world as an ironic ode to creation. Only recently, through the celebrity portraits that he autographs to himself and collaboration with Louis Vuitton luxury handbags, Prince has become an ironically public character, though virtually nothing is known about him.

"Richard Prince: Spiritual America," the Walker Arts Center's newest exhibition, is a chronological compilation of Prince's photography, sketches, paintings and sculptures. The exhibition hails one of the Prince's most infamous works "Spiritual America," a nude re-photograph of actress Brooke Shields, at age 10.

Prince, constantly sliding his toes across the line between imitation and plagiarism, works mostly with pieces referred to by Philippe Vergne, curator of the Walker Art Center, as "re-photographs." In these works, Prince takes shots of existing photography, from primped models and motorcycle girlfriends, to rugged Marlboro cowboys and big-haired metal bands, and erases the text to examine the intention behind the original composition of the photograph.

The result? Prince relays the formulaic way American culture assigns specific, significant meanings to its icons. Then he juxtaposes several re-photographs to question the validity of the icon's contrived implication.

The most obvious example is the fashion models representing class, beauty and eating disorders. He juxtaposes several re-photographs to question the validity of the icon's contrived significance.

Prince's most famous deconstruction of iconography is the appropriation of the Marlboro Man cowboy ads, icons representing hyper-masculine freedom and power. All named "Untitled (cowboy)," these photos are, in and of themselves, beautifully composed. However, even without the brand name, tobacco or the surgeon general's warning, we immediately recognize the pieces as cigarette ads.

Because of the social meanings already assigned to cowboys, the portraits lend themselves to two polarized images of the modern man. First, we examine the hyper-masculinized Marlboro Man, free to roam wherever he pleases, stronger than cancer. The other image is the insinuated homoeroticism of cowboys in modern popular culture. The union of both themes questions the validity of prefab masculine identity.

By juxtaposing several similar re-photographs, as he does in "Untitled (three women looking in the same direction)," a work depicting ironically similar fashion models advertising for separate products, we experience an interesting form of déjà vu. The audience can identify that iconography in the United States, a country supposedly that prides itself on its individualism, is ridiculously formulaic and contrived.

Taking cue from the 8-track tapes that played a continuous loop of similar music in the 1970s, Prince's re-presentation of similar photographs came to be known as "8-track photography." One example is "Bitches and Bastards," a series of re-photographs featuring badass rockers from '80s hair bands. Often indulged as departures from societal norms, the 12 photographs of people dressed the same, posed in similar fashions, with identical facial expressions, asserts that the free-roaming rocker is a product as manufactured as the high-fashion models.

As the exhibition continues, we see Prince begin to dabble in the more traditional medium of painting, as he did in the late 1980s, though the subjects of his work are not altogether serious. The common pieces in this portion are large, solid-colored canvases with self-deprecating jokes, most lifted from other publications, stenciled in bright hues.

These paintings of jokes also become jokes of paintings. An important portion of this work, Vergne says, is that "you don't joke about things that you don't care about." As an embodiment of American self-deprecation, the joke paintings point out America's realization of its own flaws and its reluctance to seriously address social issues.

While the work may be a phony Nicole Kidman autograph, repainted pulp fiction covers of over-sexualized, victimized nurses or sculptures of basketball hoops, Prince claims that U.S. iconography can be deconstructed like a muscle car, and examined piece by piece as another form of mass production.