Kitsch at the End of the World 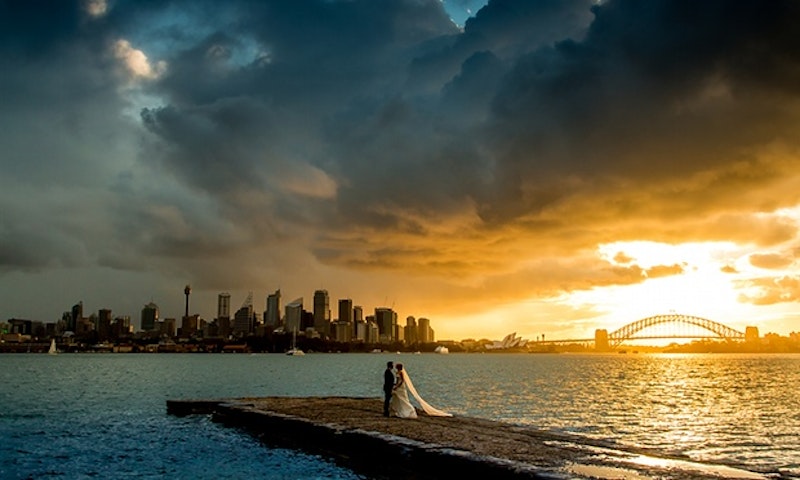 The apocalypse is kitsch. Nightmare images of zombies eating us all, the rapture descending, and/or the oceans rising and swamping the coasts are so popular because they trigger big, easy emotional responses—a delightful frisson of terror, melancholy, and self-righteous I-told-you-so's. End-of-the-world narratives are the flip side of Hallmark cards. Terminator is just Cinderella, with dead bodies in place of the final kiss. Either way, melodrama is so much fun, as that kitsch-master Billy Joel declaimed.

Cinderella and Terminator come together in a recent viral wedding photograph taken by Sam Yeldham in Sydney. The image shows a couple framed against a dynamic sky, the clouds parting to reveal an ominous red sky, the futuristic Sydney Opera House just visible on the horizon. Love stands perkily against the sweep of an ominous, indifferent nature—which makes both the love and the nature cooler and more awesomely kitschy by contrast. People have called the photograph "beautiful" and "dazzling."

But Jonathan Jones, the contractually dyspeptic art critic for the Guardian, is having none of it. The image, he declares, is trite, and worse than trite. The enthusiasm for Yeldham's photo, he says, is "The latest chapter in this decline of pictorial civilization." He adds bitterly, "A generation that has absolutely no aesthetic ballast…reacts, as if jerked by an emotional cattle prod, to a cheap bit of pimped-up nature as if it were real art.”

I don't like the photograph either. Among other things, if there's a wedding photograph, I want to see the principals. Turning the couple into every couple, and blowing their relationship up into something that shakes the stars, loses the individuality and specificity of romance. Who are these people? What does it look like when they smile at each other? You lose that here in the crash of cymbals and the roar of the greasepaint. Big can be fun, but if love is the subject, I'd prefer a good romance novel, where you actually get to appreciate Elizabeth's humor and Darcy's stiffness. The bombastic treatment loudly drowns personality in the atmosphere.

Jones, though, doesn't exactly call for more smallness. Instead, and with breathtaking cluelessness, he picks up the apocalypse and runs with it. The wedding picture here is not simply a kitschy throwaway, of the sort that's long been popular in popular culture. No, for Jones, it's the sign of civilization's irreparable brokenness and the end of all things. "All the glory of the world is being reduced, second by second, snap by snap, to instant, mechanical tropes of the picturesque. Amazing. Spectacular. Dazzling. Dead."

The apocalyptic image is, in fact, apocalyptic. Jones gazes upon that dramatic sky, and his heart responds hyperbolically to the drama. Kitsch speaks to him, and he solemnly emits kitsch. The world is ending, after all; against the Wagnerian thunder of Ragnarok, there is only Jonathan Jones.

Jones thinks he's contrasting himself, the sophisticated aesthete, with the apocalypse kitsch content providers. But the more amusing truth is that he's spouting the very same memes, and kitsching the same kitsch. Yeldham provides an image of gooey end times for easy catharsis—and Jones responds by providing an image of gooey end times for easy catharsis. The old guy sitting on the porch shouting, "get off my lawn!”—that's a photograph which could fit in Yeldham's portfolio right next to the dramatic sky and the robot invasion.

If kitsch is a genre, then the strident denunciation of kitsch is part of the genre—popular, easy, clickworthy in its cramped bombast. Jonathan Jones' shtick is every bit as polished as Yeldham's.