Conans Over the Cosmos

On Marvel's What If? series and its bizarre temporal rearrangement of one of its most enduring characters, Conan the Barbarian. 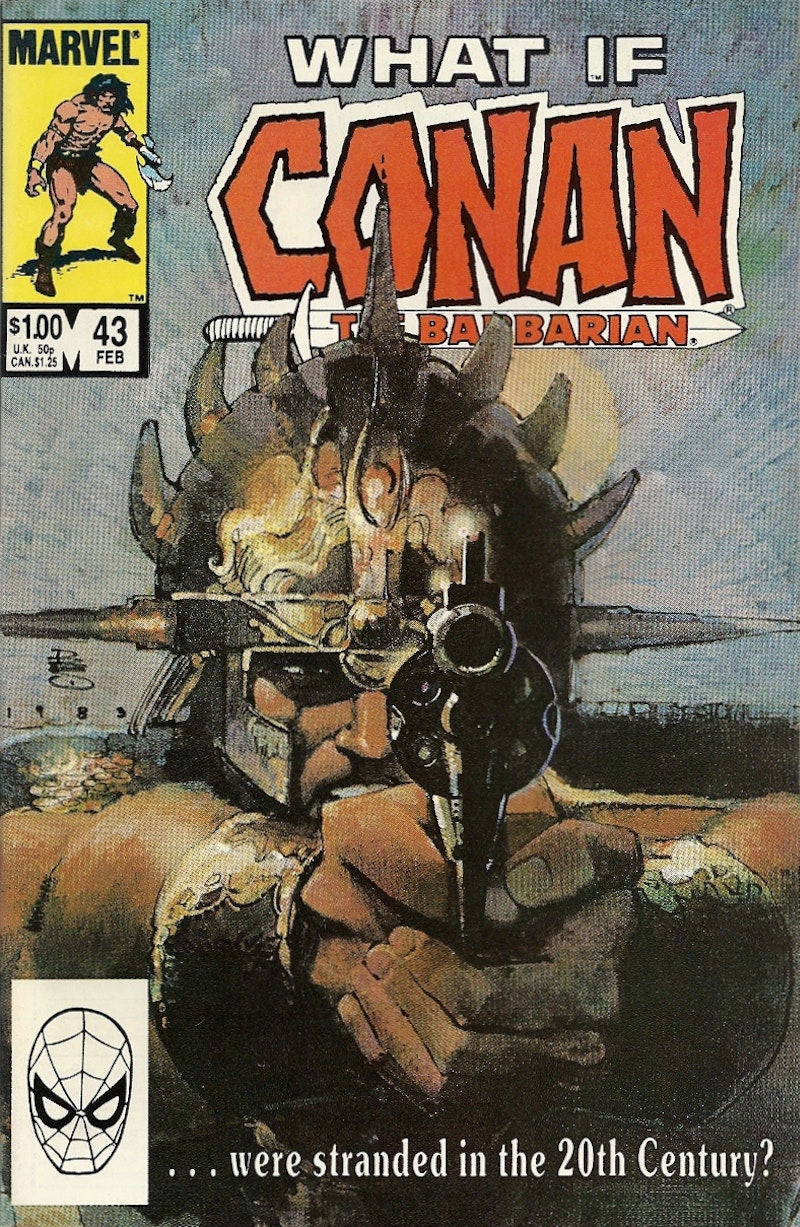 Conan the Barbarian, for 90 years, is one of literature’s most enduring characters. He’s the oppressed and the oppressor. He’s a fragile soul who suffered brutal abuse as an orphaned slave in the violent land of Cimmeria. As a self-defense mechanism, his memories of life in bondage gave him a personality that was callous and opportunistic. Conan refuses to take a side in any conflict waged by any kingdom (except for the one he stumbled into ruling over himself). He has a hatred for those who prey on the vulnerable; a fact that often creates the illusion of benevolence. As long as his life and his money remain unthreatened he moves along with the tides of revolution and chaos regardless of where they take him.

This trait became the central theme in two insane Conan tales that ran five years apart in the first run of Marvel’s Twilight Zone-style sci-fi series What If? For those unfamiliar with the premise of What If? here’s the short version: Uatu The Watcher (an immortal being who’s like a bald New Age-Rod Serling from outer space) travels throughout the vast Marvel Universe collecting and sharing some of the most obscure stories ever to star famous super heroes. Unlike DC’s wacky Bizarro characters, the What If? versions of Sgt. Fury, Phoenix, Vision, The Thing, and all the rest are not comedic variations. They possess all the usual powers, secret identities, bold personalities and colorful costumes that appear in traditional super hero titles. The strangest elements of What If? are the circumstances and locales unique to its stories, situations and places that make super characters feel awkward.

Conan tales are usually set in a prehistoric milieu called The Hyborian Age, which bears close resemblance to the Bronze age. In What If? Conan is transported to the 20th century by a sorcerous rival. The first story to focus on this concept came out in What If? no. 13 (February 1979). The dark-haired Cimmerian finds himself in the midst of NYC’s 1977 blackout besieged by “armored dragons” (us non-Hyborians call them “cars”), frantic looters, glammed out punks, and a surly Red Sonja-esque cabbie named Danette.

Much of this action is played for laughs as Conan sloppily tries to navigate through the slang, etiquette, and campy pop culture of the 1970s. Darker messages bubble up when writer Roy Thomas uses narration to hurl barbs at the modern pathos of urban political tension, “nuclear nightmare, and fashionable neurosis.” His description of looters in particular is bitter: “In every age, in every clime, they exist—ready to take advantage of any breakdown of social order… From time to time Conan himself has joined such lawless rat packs. Little he cares for the vagaries of social ills or private property… a howling looting mob may easily turn into a killing mob.”

February 1984 brought the 43rd issue of What If? This continued the earlier NYC odyssey. Peter Gillis wrote the script and the 70s art team (John Buscema and Ernie Chan) was replaced by Bob Hall. “What If Conan The Barbarian Were Stranded In The Twentieth Century?” feels like a reject from the bizarre Assistant Editor's Month yarns that Marvel was running just the previous month. Like that concept art event, this book is filled with inventive sight gags and other experimental touches that make the story far more sophisticated than the older time-traveling Conan adventure.

Unable to return to the Hyborian age, our anti-hero soon discovers that humanity’s thirst for violence and imperialism remains insatiable. He learns how to manipulate the monetary system, starts a protection racket, gains respect from criminals and street people in the South Bronx and the Lower East Side, and becomes an underworld boss after forming his own street gang called The Barbarians. who all carry swords and scabbards. Despite the offbeat humor, What If? 43’s most interesting moment is dramatic. Conan and The Barbarians gang face off against Captain America and The NYPD in an intense gun battle that ends in a stalemate. Gillis brilliantly transforms the Captain into a voice for idealized American freedom that smashes against Conan’s ironclad cynicism. As the Cimmerian’s silhouette fades into the ghetto Cap gets lost in uncertainty. He thinks aloud, contemplating an amoral enemy who only commands respect: “In another world—a world where the dream of freedom and justice was never born—might that not be the shape of a hero?”