The Wall of the Hokey-Pokey. 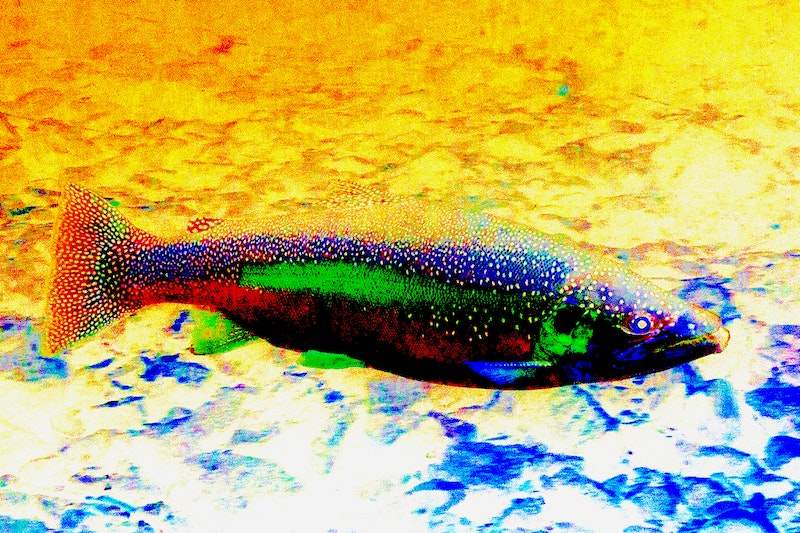 As I was saying, you take a piece of fish—scrod, mackerel, salmon, trout, your choice—toss it in the frying pan, but no butter, take a no-bark stick and poke it around. Poke and stir, poke and stir. Poke it good, cooks! Scramble the diced onions, mushrooms, capers and shallots, squeeze the lemon on the fish—bluefish, tuna, catfish, flounder, grouper, or call it a Sunday and go nuts with scallops and shrimp—and poke, poke, poke until your hand is nearly bleeding. That’s what I call a proper supper.

“The next day, everybody got up

Seein’ if the clothes were dry

The dogs were barking, a neighbor passed

‘Have you heard the news? he said with a grin

‘Well, there’s nothing we can do about it,’ said the neighbor

‘It’s just something we’re gonna have to forget’

Then she asked me if the clothes was still wet.”

Has Kamala Harris gone mad? If so, it’s been kept under wraps. I was wondering about her state of mind when, in a Sunday Morning interview last weekend she said that 1/6/21 will live as a date that everyone will remember where they were, like Dec. 7th, 1941. She could’ve been joking—you know the Veep has a shadow career as a stand-up comedian, but, as is said too often, she should keep her day job!—but if not, that’s kind of certifiable.

On the other hand, maybe it’s me who’s gone dotto-blotto, since the above lyrics were written by Bob Dylan in 1967 when Hubert Humphrey—the Happy Warrior from Minnesota who sacrificed his legacy as an early (for politicians) civil rights champion in favor of doing errands for LBJ, and still taking shit from his boss, no thank yous, not dissimilar to Trump dumping on dump-worthy Mike Pence—was in office and Dylan was in Woodstock writing a million songs and probably didn’t give a hoot about HHH. Maybe it was Levon Helm who gave him the idea for that lyric. Or Garth Hudson, by all accounts a good guy who likes to eat porridge morning, noon and night, at least according to my old Long Island buddies Mike Bifulco and Scott Savitt.

The kook factor is too mild for newly-departed Phil Spector—as the fairly new joke goes, he’s looking up at us like John McCain—but I never got too tied up in his sundry felonies and then a murder conviction, with no disrespect meant for the victim, since I lose interest in music artists once they’re put out to pasture, usually involuntarily. That puts me in the penalty box with fellow Dylan fans, as if I’m supposed to lose bowel control over “Murder Most Foul” (some pro-lockdown ninnies said, when the embarrassing song came out last spring that “It’s just the song we need right now”) just because he wrote the eternal “Tombstone Blues” and “As I Went Out One Morning,” to name two off the chinny-chin-chin top of my head.

Spector did have that winning cameo in Easy Rider, making himself feel useful after the flop of Ike & Tina’s “River Deep, Mountain High,” a magnificent “Wall of Sound” production that was just too late to make a dent in the American Top 40, in a world taken over from him by Brian Wilson, Van Dyke Parks and The Beatles.

But man, what a collection of songs: from the Teddy Bears’ “To Know Him Is to Love Him,” Ben E. King’s “Spanish Harlem,” through the string of Ronettes smashes like “Be My Baby” and “Walking in the Rain,” and the Crystals’ “Uptown” and “He Hit Me (It Felt Like a Kiss”) up to the Righteous Brothers’ blue-eyed soul of “You’ve Lost That Lovin’ Feeling.”

I remember one evening in 1981 or ‘82 at my brother’s fifth-floor walk-up apartment on Elizabeth St. in Lower Manhattan (gentrification was years away) and, passing the time, we each compiled a Top 10 Songs, a common exercise. A Stones man, Gary had one of the band’s biggies as #1, and then he cried Tomfoolery Most Foul when I offered the Crystals’ “He’s a Rebel” as my top pick (I almost always choose “Like a Rolling Stone”), saying I was just causing mischief for the sake of mischief, and he invalidated my list. Fair enough! “He’s a Rebel” is my favorite “Wall of Sound” song, but in reality I’m not sure if it’d crack my Top Ten. But it’s a close call.

In 1977, City Paper colleague Craig Hankin and I went to a DC club—think it was the Warner—to see Springsteen pals Southside Johnny & the Asbury Jukes, and, as luck would have it, Ronnie Spector opened for the band. Better luck still, we somehow talked our way into backstage passes and had a 10-minute audience with living legend Ronnie, who was a sweetie, really buoyant and generous to give a couple of kids a thrill. We didn’t want to screw things up, so didn’t mention ex-husband Phil and all those Phillies Records smashes, even though that would’ve been far more interesting than her current career.

I must disagree with son Nicky on Spector’s production of The Beatles’ last released record Let It Be (recorded before the even-worse Abbey Road). Never mind Paul McCartney’s bitching—at the time and long after—since penny-pinching and revisionism are his stocks in trade. Nothing could save McCartney’s horrendous “The Long and Winding Road” and aside from “Get Back” and the throwback-to-greatness “Two Of Us,” I have little use for that record. Oh, maybe George Harrison’s “I Me Mine,” if only for my ninth-grade friend Ricky Morrison, singing, non-stop, in 1970, “All through the night, she is mine, she is mine, she is mine.”

That was a bitter period for The Beatles. McCartney released his first solo record, and that’s when news of the break-up came out to fans. And then the movie Let It Be was really crummy. And fucking Yoko, still a villain in my book.